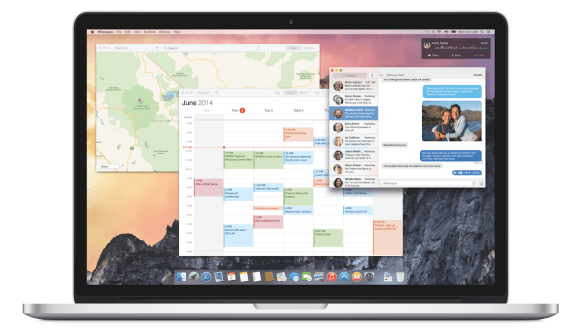 Apple just announced that Yosemite will be available for download today for free on the Mac App Store. Yosemite is a more significant upgrade than last year’s OS X Mavericks, adding several new features that allow Macs to work together with iOS devices.

You can, for example, easily continue working on a document on your iPhone that you originally started on your Mac with the new “handoff” feature. Yosemite also allows Macs to answer calls that your iPhone receives, and eventually you’ll be able to reply to all the text messages your receive on your Mac, not just iMessage texts from other iPhone owners.

On stage today, Apple’s software head Craig Federighi noted that more than 1 million people have downloaded the Yosemite beta over the past few months.

Yosemite also brings a slew of new upgrades: Spotlight search can now search across the web and your documents; devices can now Airplay content to each other without connecting to the same Wi-Fi network; and you can now Airdrop files between iOS and OS X devices (a feature I’ve grown to love in my testing).