You can instantly stream console-quality games to your mobile devices right now using OnLive, but Galaxy Note 4 owners will get free access to a considerable library of games thanks to a new Samsung partnership with the service.

Cloud-gaming company OnLive revealed today that it’s working with Samsung to offer three free months to game company’s PlayPack subscription service to anyone who buys the mammoth 5.7-inch Android device. This provides a way to get games outside of the normal mobile fare on your phone; OnLive streams the same software you’d play on a high-end PC or HD gaming machine. This means that Galaxy Note 4 owners will get around 90 days of high-quality games that are a part of OnLive’s PlayPack like L.A. Noire, Batman: Arkham Asylum, and more. The popularity of the Note, combined with its large screen, could help revitalize the OnLive service, which has struggled in recent years.

“The addition of the OnLive app to the Samsung Galaxy Note 4 makes high-end games available that normally can’t be played on an Android tablet,” OnLive executive chairman Mark Jung said. “We’re excited to give Samsung customers a taste of cloud gaming with the gift of three free months of unlimited gaming.”

While streaming games to the Note 4 will probably look OK, controlling console and PC games on a touchscreen might still prove uncomfortable. OnLive does support controller peripherals, which players can connect to their smartphone and use to play games. But OnLive has also worked to patch in touch controls for a handful of releases as well. For everyone else, the service does have an option for a virtual onscreen controller, but it looks a bit ridiculous: 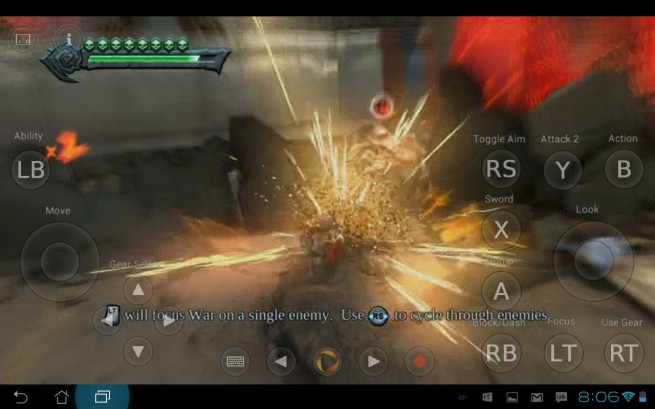 Above: Now, that is convoluted.

In addition to the free three-month subscription to OnLive’s PlayPack, players will also get a seven-day free trial of OnLive’s CloudLift system. This enables you to connect OnLive to your Steam account and instantly stream any game from your library to another device. You can start a game on your PC and pick it up from the same point on your Galaxy Note 4 while out on the go.

This is just the most recent partnership deal for OnLive. Last month, the company announced a deal where British game-distribution company Green Man Gaming would sell subscriptions to OnLive. Also last month, OnLive partnered up with Philips to bring game streaming to the company’s new Android smart TVs. In June, Mad Catz announced it would include OnLive in its new Android microconsole to bring triple-A games to that device.

These deals are part of an effort to keep OnLive chugging along. In 2012, the cloud-gaming company essentially fell apart under its original ownership. Now, under new ownership, the company is trying to push ahead as a leaner organization that tries to build an audience through the partnership deals like you’re seeing today.