Update at 2:40 p.m. Pacific: Twitter added that one song from Apple’s iTunes catalog is also available as an Audio Card.

Twitter has a new way for you to listen to audio and music: the Twitter Audio Card.

In Twitter’s iOS and Android apps, you can tap on embedded audio from the new card right from a tweet. You can also “dock,” or minimize into the corner of the app, the Audio Card you’re listening to and continue to browse around Twitter without interrupting the listening experience.

Twitter is partnering with third-party music services for the new card, and first up is SoundCloud, a music-streaming and -hosting service. SoundCloud will open up its full catalog for streaming through the new card.

Also, Twitter just announced that it’s working with Apple’s iTunes, and the company is making one — yes, one — song available for Audio Card embedding. The lucky song is The Foo Fighters’ “Something From Nothing” from its upcoming album, “Sonic Highways.” More songs from iTunes will become available at some point in the future.

For now, you can listen to music, podcasts, and other audio from select SoundCloud partners, such as musicians, media publishers, and other organizations. You do, however, have to follow these partners’ Twitter accounts in order to be able to listen to the cards, we’ve learned from SoundCloud. The steaming company will roll out the capability to share content via Audio Cards to all of its listeners in the next few weeks, the company told VentureBeat via email. 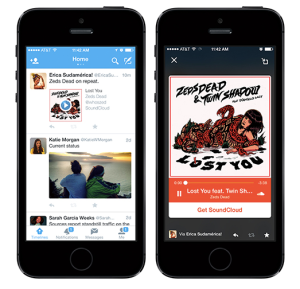 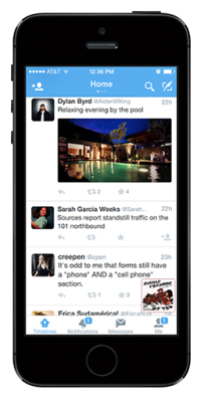 Back in June, fashion and culture site Dazed posted a tweet with a card that autoplayed music through an embedded media player. Video platform Kaltura was powering the media player in the card, which seemed to be an experiment in adding audio into tweets.