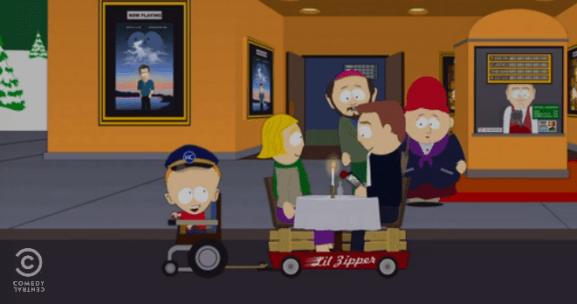 The craziness of ride-sharing startup wars has become mainstream enough to warrant an entire South Park episode. The insightful cartoon series did a decent job poking fun at everyone involved in the ongoing conflict, from the awful customer service experience of taxi drivers to the grandiose vision of tech founders.

The story revolves around the wheelchair-bound mentally challenged character, Timmy, who comes up with a way to raise money for summer camp by developing a smart-phone-enabled ride-sharing company, Handicars (which resembles Uber).

After more and more of the town signs up to his service, the taxi industry devises a bizarre scheme to embarrass the growing Handicar business in an all-out death-match race that involves a self-driving car, Lyft, and an evil Elon Musk, who feels threatened by taxi services.

Musk was a good sport about it:

Kinda trippy seeing myself on @SouthPark. I've watched the show ever since the J vs SC short. Brian Boitano!

As usual, South Park snuck in their own editorial nuggets in between the nutty scenes. During one moment between two of the antagonists of the episode, they sit down and discuss the taxi industry

Bad guy 1: “These are supposed to be men who care about their occupation.”

Bad guy 2: “Maybe if they’re that incompetent we shouldn’t be trying to save their jobs. Maybe Handicars are a kind of economic natural selection where the most diligent workers are weeding out the useless ones.”

The parody isn’t too far off the mark. Taxi unions and government regulators often couch arguments against ride-sharing startups in terms of safety for consumers. But when I ask protesting taxi drivers about ride-sharing competitors, they often admit they don’t even want the competition to exist.

Indeed, taxis operate on a medallion system that limits the number of cars on the road. So for a long time, the government did physically restrict competition. There was no economic natural selection in the industry. Right or wrong, it is a philosophical debate that South Park captures well.

Watch the full episode in the above video.