I hate batteries, especially charging them. As soon as we get rid of this archaic way of supplying energy to our devices, I’ll be happy. My experience of covering the Apple press event in Cupertino, Calif., is a perfect example of the fallibility of humans, especially me, and why batteries aren’t helping us. This is one of the biggest technological challenges of our time.

In telling this inside story, I’m going to show you a little about how I’ve learned to operate over the past 25 years covering tech events. I hope in the telling that you’ll come around to my view on batteries and the need to move beyond them, but the risk is simply that you may wind up thinking I’m an idiot who found as many ways to fail as possible. 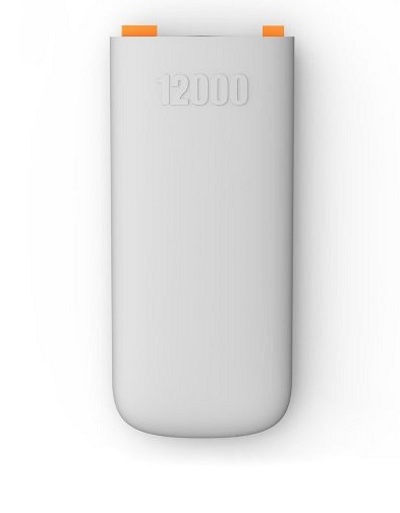 I didn’t have the greatest night’s sleep before the press event since I worked until 2:30 am and woke up four hours later (Epic Dean Fail No. 1). I checked my iPhone and found that it only had 40 percent battery, because my charger had failed for some reason. I knew I was in trouble because my iPhone doesn’t last through the day without a recharge (Epic Battery Fail No. 1). This was actually my second iPhone 5S, because the first one failed due to rapid battery drain. The charging cable was getting weak, and I hadn’t yet gotten around to buying a new one, because these chargers cost $25 to replace (Epic Battery Fail No. 2). But it was plugged in, and it didn’t charge.

I thought about plugging it into my trusty Lepow 12000 mAh external battery pack, a $90 device. This is a great battery pack that lasts for many hours. But it doesn’t have an on-off switch. (Epic Battery Fail No. 3). So the battery tends to run out after a number of days, and I had forgotten to charge the portable battery pack (Epic Dean Fail. No. 2). I had one of those $99 iPhone battery-charging cases, but I lost it some months ago (Epic Dean Fail No. 3).

I managed to get to Apple’s headquarters with plenty of time to spare. They let us in through the front door at Infinite Loop, a rarity for an Apple event, as we usually have to go in through a side entrance. Apple had all the amenities for the press: tables, coffee, and breakfast food. But no charging outlets. That was OK, the Apple folks told me, because they had charging outlets at the seats in the auditorium. When I got to my seat in the press event, that turned out not to be true. I looked up and down the rows and there wasn’t an open seat near an outlet. You can imagine my terror at this point, as the lights dimmed and Tim Cook, Apple’s chief executive, came out on stage.

I pulled out a handy new Google Chromebook from Toshiba, which I was using because I had dropped my laptop the week before. (Epic Dean Fail No. 4). I tend to drop my laptops about once every four years, as a kind of homage to Moore’s Law.

This new device was properly charged and it worked through the whole two-hour event, with great access to Wi-Fi. I was grateful for that, since Wi-Fi is always touch-and-go at these events because of the crush of press people filing news and videos. But it didn’t have a properly working version of Convo, an app that our team uses to communicate. Rather than pull out the slow spare laptop with Convo, I decided to use Convo on my iPhone.

When the silvery words came out of Tim Cook’s mouth, I raised the digital camera to take a picture. Nothing happened. Tiffany, our nickname for the office camera, had run out of battery power. (Epic Battery Fail No. 4). I had not charged her because, you know, I had just borrowed her, and these things rarely run out of lithium ion battery power. I charge my own camera battery once every few weeks.

But Tiffany was dead when I needed her the most. So I switched to my spare camera. I was sitting on the end seat because I was using the Chromebook to charge my battery and my spare MiFi (which gives me Internet access when Wi-Fi fails). If I had been able to see myself, I’m sure I would have looked like a comically wired figure, with a camera, laptop, and a couple of wires reaching into my pockets.

The problem with my own five-year-old Canon Rebel XSi is that it doesn’t focus well in dark environments and can’t really shoot something 50 feet away, even with the zoom lens. Cook was out of range. Tiffany is a very nice Canon EOS Rebel T3i camera. But she belongs to the company and we do not have a spare battery for her. I could have switched my battery from my older camera, but the battery for the Canon T3i and the battery for the Canon XSi do not match (Epic Battery Fail No. 5). 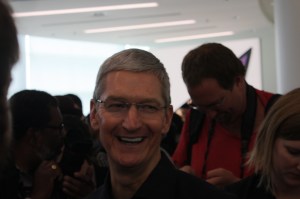 Above: Tim Cook, CEO of Apple

So the pictures for the press conference were duds. I’m pretty sure I annoyed the heck out of Molly Wood, the New York Times tech writer who was sitting next to me, with all of my camera clicking. My iPhone was also buzzing all the time as the weak wired connection to the Chromebook kept getting turned on and off.

I was sharing these pictures with my colleagues, who were covering the event along with me from afar, and they were not impressed. Yes, I realize that the answer to this problem is to spend money on a better camera or a spare battery (which is expensive), but money shouldn’t be the solution for everything. I was able to update our live blog with the Chromebook, but I was slow at typing updates on my iPhone to my colleagues on Convo. I couldn’t pick up the iPhone and call my colleagues because that would have been even more annoying at the press event, and I’m pretty sure the beefy Apple security folks would have tossed me out for the annoyance.

I managed to get through the event, surviving for about four hours without a bathroom break. And then it came time to go check out the Apple products in a showroom next door. At that point, my iPhone was out of battery, even though I had been trying to charge it via the USB port on the Chromebook (Epic Battery Fail No. 6). I plugged the iPhone into a wall socket and went off to take pictures of the new iMacs, iPad Air 2s, and iPad Mini 3s. I couldn’t shoot videos because both my iPhone and Tiffany were out of action. I did manage to get a shot of a smiling Tim Cook up close, and I consider that my finest moment. I filed the pictures to my crew, sent some emails, and then I headed home, where I immediately charged about five different devices. I also had to take a nap and, you got it, recharge my own batteries.

I spent this whole event caught in the Infinite Loop of Epic Dean Fails and Epic Battery Fails. But rather than take personal responsibility, I want to blame the batteries, since I count six Epic Battery Fails to four Epic Dean fails. I’m writing this for posterity, so people can avoid my own mistakes. But I have to ask the tech companies out there: Why am I at war with my batteries, and, by extension, my devices?

Battery technology moves forward so slowly, but our tech gadgets race ahead to steal whatever extra juice the batteries give us. I sure hope the upcoming Ampy device will work. Ampy uses your own kinetic motion to capture an electrical charge and supply energy to your smartphone. Created by a few students at Northwestern University, it promises to give us several more hours of smartphone battery life in a day. The team has already beaten a goal in raising money for Ampy in a Kickstarter crowdfunding campaign. Such alternative sources of energy are how some companies are thinking about supplying power to all of the sensors in the “Internet of things.” Intel has also promised that we won’t have to carry around charging cables in the future as it moves to wireless charging technologies.

Those technologies could help us live with longer battery life. But, like I said, I’m waiting for the day when technology gets rid of the battery for good. Why do we need to carry around these cables that plug into walls? Why can’t we harness more sources of energy to power our tech gear? Why does the tech gear consume so much energy still? Solving this problem is the Holy Grail of innovation, which will deliver us from our battery hell. I only discovered this thought through a series of epic failures and digressions at an otherwise very important Apple event. Tim Cook, are you listening? Please ship the iPhone 7 without a battery or a charger. 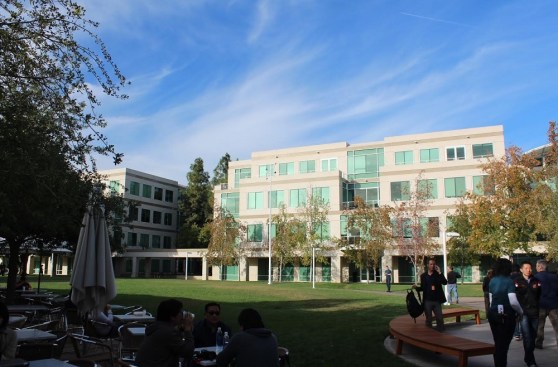