Since Square Enix released Dragon Quest VII for 3DS in Japan last year, fans have been waiting not so patiently for the classic role-playing game to reach our shores … along with other recent titles, like Dragon Quest X.

But localizing these games is a complicated affair. Dragon Quest VII, which debuted on the PlayStation in 2001 — 13 years ago — is particularly massive, spanning over 100 hours. It’s one of the longest entries in the series.

How does Square Enix take a game over a decade old and give it a modern makeover without upsetting the audience that fell in love with it? And for goodness’ sake, why does localization take so long? Dragon Quest mobile producer Noriyoshi Fujimoto, localization coordinator Mei Koshimizu, and localization translator Dan Inoue spoke to GamesBeat to demystify the process.

A decade of change

Any Dragon Quest fan can tell you that the style of the series has changed over its lifespan, and not just because we used to call it Dragon Warrior (at least here in North America until the early 2000s). As the in-game dialogue has become fancier, with more puns and dialects for characters, so has Square Enix refined its approach to the translation process. 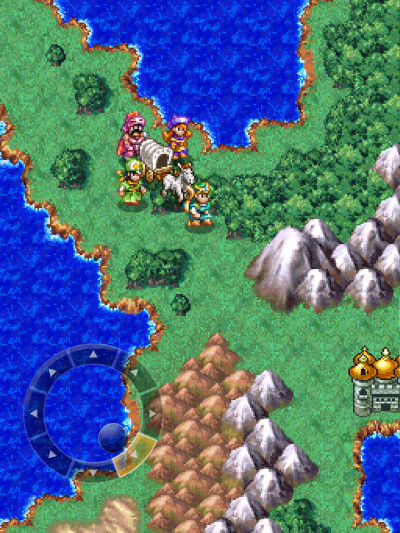 Above: Dragon Quest IV: Chapters of the Chosen for iOS and Android.

“The overseas versions now have dedicated coordinators making sure each language receives the necessary attention from our development team so that we can deliver high quality games,” Fujimoto told GamesBeat in an email interview. “Our translators develop localization strategies through glossaries and style guides so that we communicate not only the information but the appeal of the games.

“For instance, on Dragon Quest IV, we really wanted to emphasize the game’s sense of exploration and adventure to players, so we localized each region with its own accent and wrote the party characters’ dialogue in line with their respective hometowns.”

The developers create an eclectic culture in-game by first heeding the larger demands of the localized language. That can mean incorporating idioms, puns, rhymes, and other linguistic touches.

“Games often communicate information to players in brief, pared-down sentences, bypassing the complex grammar issues that arise across various languages, but Dragon Quest has always been about telling a story,” Koshimizu and Inoue said in a joint response. “To that end, we have taken great pains to develop methods of making full sentences sound as natural as possible across languages.”

One example? “For English, we generally employ British English,” they said, “[this harks back] to the fairy tales and legends of old, all in line with the idea of telling a story.”

For a game like Dragon Quest VII for 3DS, Koshimizu and Inoue noted that “the sheer volume is what presents the greatest challenge” to localization. That involves a great level of consistency between the team of translators and coordinators, who need to know the game intimately before attempting a localization.

“Making a huge world feel consistent requires a lot of forethought into naming, characterizations, and other world-building aspects,” Koshimizu and Inoue said. 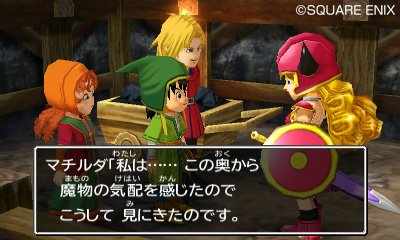 Above: A Japanese screenshot from Dragon Quest VII for 3DS.

Fujimoto added that for Dragon Quest VII, the translation process itself would take at least a year to complete. But easing the workload isn’t a simple matter of distributing it among as many translators as possible.

“Each translator has his or her own style, and the more we add, the harder it becomes to maintain consistency on the whole,” he said. “We rely on a small group of highly talented writers to produce a superior translation, which is then handed to the editor, who sees to it the feeling and fun of the story never falters, from start to finish.”

But while the linguistics — and logistics — have become more complicated, experience has taught Square Enix a lot. As far as preserving the tone of older, original games like Dragon Quest VII, Koshimizu and Inoue said that the mobile release of the first three Dragon Quests have been good practice. In the recent Dragon Quest III for mobile, Square Enix highlighted the contrast between worlds by using archaic speech in one and modern speech in another. 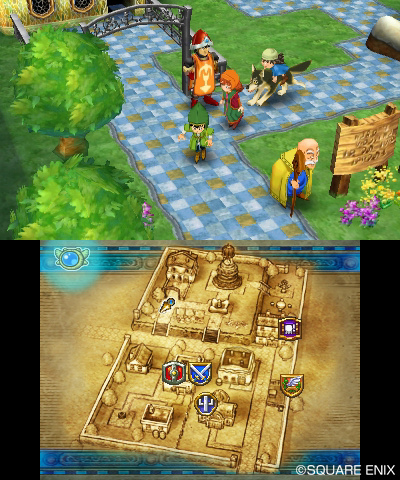 Above: A look at the top and bottom screens in Dragon Quest VII for 3DS.

These new, stylistic changes liven the game world and make it more fun. “Ultimately, how to balance the old versus the new comes down to creating the best experience for our players,” they said. “Our loyal fan base is vocal, and we make a conscious effort to build on the things they love while innovating in a way we think will please them.”

The glossaries and style guides have helped with maintaining consistency in translations, and better technical knowledge for “adjusting screen layouts and supporting various aspects of grammar” have given the translators more freedom overall, Koshimizu and Inoue said. “These improvements allow us to pour more time into world-building and characterization, which are challenging tasks in their own right, but ultimately it is all a labor of love.”

And for those fans who are dying to know if Dragon Quest VII is coming Westward? “I believe every flagship Dragon Quest title, not just Dragon Quest VII, is worthy of localizing to the best of our current abilities,” said Fujimoto.

“As for Dragon Quest VII, there has not yet been an official decision to localize the title anew, but the warm messages of support we’ve received from fans have been very encouraging. I never want to let our fans down, and I will continue to do my best to bring Dragon Quest games to our audience outside Japan.”