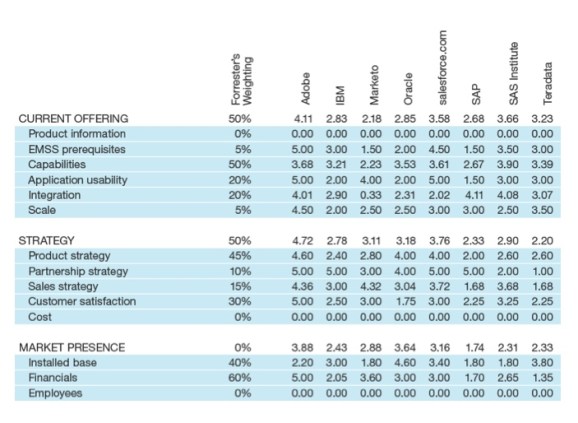 Adobe has taken a lead in the fast-growing enterprise marketing software sector, according to a Forrester Research report to be published today.

Adobe has “distanced itself from the pack” of competitors, said the report, beating out Salesforce.com and six other vendors assessed by Forrester. The ranking was based on 46 criteria covering things like current offerings, product roadmap, and market share.

The report comes at a time of high stakes in the marketing technology sector: Dozens of vendors, including the biggest enterprise companies like Oracle, SAP, and IBM, are vying to serve hundreds of thousands of marketers with automated ways to attract and serve their customers using software. Until recently, marketers have cobbled together various software solutions to handle different functions, like managing email, mobile and social campaigns.

1,000 marketing pros told us
what works and what doesn’t in marketing automation.

Increasingly, though, marketers are moving to buy integrated software suites that handle all of these things in one package.

“At this point in time, Adobe has set itself very well apart,” said Cory Munchbach, the Forrester analyst who authored the report. She said Adobe had customers who could speak to how they were using a significant percent of its marketing technology. “Not every vendor could do that,” she said.

According to Forrester’s ranking, Adobe and Salesforce have asserted themselves as the two leaders (see the scores the two vendors achieved on respective criteria in the chart above).

These two were followed by a group of four legacy vendors — SAS Institute, IBM, Oracle and Teradata — which remain “strong performers,” but lag in key performance areas. For example, Forrester rated IBM and Oracle only a two on a scale of one to five for application usability, where five is the best score achievable. The SAS Institute and Teradata faired only slightly better, each getting a three. But those scores paled compared to the fives scored by Adobe and Salesforce.

Finally, Marketo and SAP rounded out the group of companies ranked by Forrester. These two companies both offer the “foundations” of an enterprise marketing suite, Forrester concluded, but they lack key features. Marketo, which recently went public, is still a young company, and trailed its rivals badly on Forrester’s “capabilities” ranking. SAP, while also somewhat weak on capabilities, also performed poorly in several other areas, including usability.

Adobe did well enough in several key areas to beat out Salesforce. First, Adobe has done very well integrating its extensive offerings, which are partly based on the company’s acquisitions of Omniture, a leading analytics company, and Neolane. a marketing automation company. Salesforce.com has done less well integrating its various products, which also are based on several acquisitions.

Forrester based its report on its own briefings with the vendors, but also on online surveys with 53 individuals who were clients of the vendors. Forrester asked each vendor to supply a minimum of 8 to 10 customers for it to survey. It conducted the survey from June to July.

One challenge was to compare pricing among vendors, Munchbach said. Vendors have such complex bundling and other varied pricing strategies that it is impossible to compare pricing on an apples-to-apples basis. Many companies also like to keep pricing details private. So the Forrester report did not use pricing as a metric for comparison, arguably a glaring omission.

Another caveat to the findings, Munchbach said, is that most customers have such unique needs and infrastructure that it is difficult to make generalizations about vendors.

“In no case, is a software suite going to look the same for Company X as it is for Company Y,” she said.

Update: Cory Munchbach has blogged about the report here.