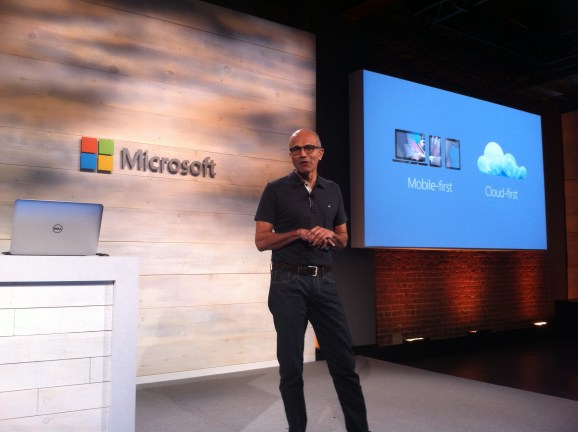 SAN FRANCISCO — Microsoft today announced at the Microsoft Cloud Briefing event the new memory-intensive “G-series” instances for its Azure public cloud, as well as new storage options with major performance gains over what was previously available.

The new G series instances boast “more than twice the amount of memory of the largest AWS [Amazon Web Services] virtual machines,” Microsoft’s Scott Guthrie said. And they have “more than four times the memory of Google Compute machines.”

The premium storage include as much as 32 TB of storage per virtual machine, with more than 50,000 input-output operations per second (IOPS), Guthrie said.

Microsoft has emerged as one of the top three providers of cloud infrastructure, going up against Google and Amazon in particular. All three have released a wide swath of services — from storage to hosted databases, from mobile backends to content-distribution networks — but fundamentally, they face off on price and specifications for slices of the physical servers in their data centers.

The pattern in place for the past few months is this: Google cuts prices across the board, then Amazon cuts prices for a few services, and then Microsoft reiterates its commitment to keeping prices competitive with those of AWS.

But in recent months, the cadence of Azure feature releases has been heating up. Recent announcements include new D-Series virtual machines backed up by fast solid-state drives, a hosted NoSQL database, a live-streaming service, a service to assist in migrations of workloads from companies’ data centers to the Azure cloud.

And Microsoft has been growing its infrastructure footprint.

“Next week we’ll open up our two new Australia regions to the public,” Microsoft’s Scott Guthrie said at the event. That will bring the total number of Azure regions up to 19.

Such language demonstrates the highly competitive nature of the cloud infrastructure market.

Customers that Guthrie touted include AccuWeather, Heineken, and Milliman.

“The Microsoft cloud is the most complete cloud offering that empowers every business across every industry in every geography, and at its core you have the most ubiquitous horizontal business applications in Office 365 and Dynamics,” Microsoft chief executive Satya Nadella said. “These are the applications that every user inside of an organization that uses these application touches and uses.”