Candy Crush Saga is still one of the highest grossing games on mobile, but the stock market doesn’t find this all that impressive anymore. And even double-dipping on the Candy Crush name might not help the social-gaming publisher.

King Digital’s stock is currently trading at around $11.60. That’s just a few percentage points better than its record low of $10.93, which it hit last week. King’s share price is actually down 1.7 percent today despite the company releasing Candy Crush Soda Saga, a followup to its most popular and lucrative game, on Facebook. Investors don’t seem to care that King has another Candy Crush game, as many worry that the original has peaked and the publisher won’t ever have another game to replace it. 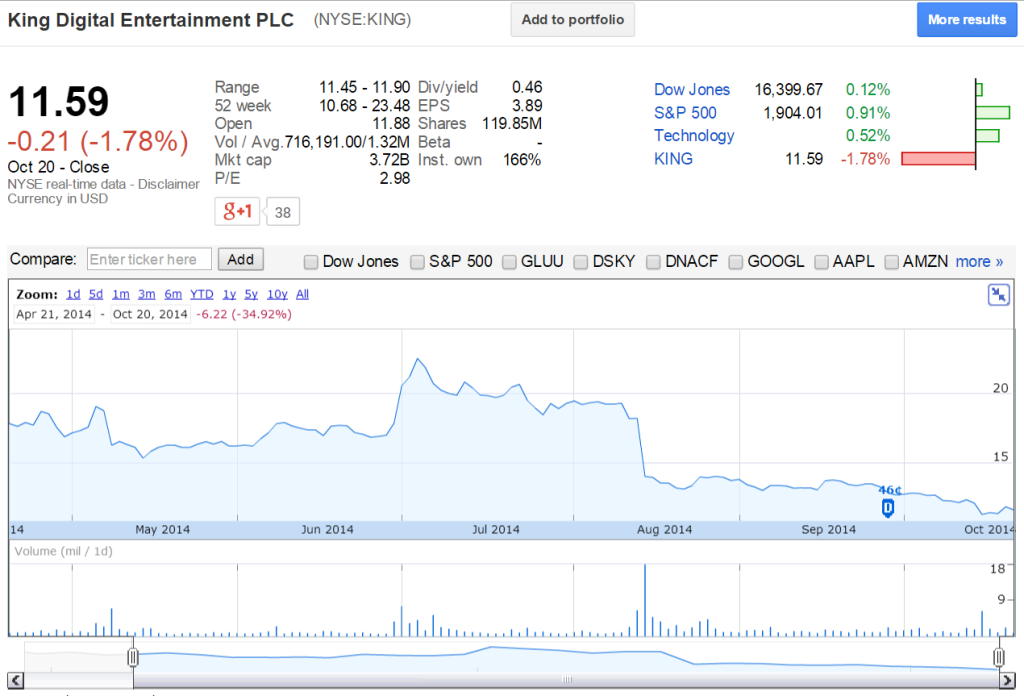 Above: King stock over the last six months.

King remains a successful company. Candy Crush Saga is still the highest-grossing game in nearly 23 countries. It is in the top 10 highest grossing in more than 100 different markets. It’s maintained its popularity since its release in late 2012. But everything that goes up and makes a ton of money on mobile must eventually come down. And the market is positioning itself for that — and rightly so.

Above: King’s Q2 report revealed how its network of players is starting to plateau.

Those numbers are all heading downward, and that’s likely due to Candy Crush Saga losing just a bit of its momentum. Since then (and really since King went public in March), investors have waited for the publisher to show that it can re-create the success of Candy Crush Saga. It has not, and many investors are hesitant to put their money into the company until it proves that it can.

King seems to realize that another Candy Crush Saga is unlikely, and it wants to continue pumping money makers that aren’t necessarily phenomenons. Even Candy Crush Soda Saga doesn’t seem like it could do more than appease fans growing restless with the original game.

“Our long-term strategy is to develop global game franchises which are loved by millions of players around the world,” King chief creative officer Sebastian Knutsson said in a statement. “Candy Crush Soda Saga offers fans new gameplay features and challenges to delight in, and has been designed to complement the original title, which we believe players will also continue to enjoy.”

The biggest thing about King is that it may likely make the entire market cool toward mobile-game developers. Prior to its initial public offering, the word was that King was the anti-Zynga. That publisher, famous for Facebook megahits like FarmVille, quickly lost its value on the stock exchange because it wasn’t ready to shift to iPhone and Android. King doesn’t have that problem. It’s making money on Facebook and smartphones, but even that can’t keep its stock from plummeting.

Right now, King might have more success by shifting its model to follow some of the new leaders on mobile. Developer Glu has started to stand out thanks to its lucrative megahit Kim Kardashian: Hollywood, which is using the celebrity’s persona to market the game. Glu’s starlet-endorsed game has already made $50 million in four months, and it should keep making money like that for the foreseeable future. It’s possible that a big company like King could do something similar, and analysts think that is likely.