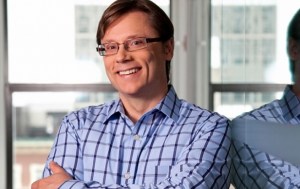 Above: Micah Adler, CEO of Fiksu

The funding comes just after the Boston company announced it had surpassed $100 million in annual revenue and hired Kenneth Goldman as its chief financial officer. The company regularly reports data on the cost of user acquisition in mobile, and it has information from more than 3.3 billion app installs, 4.7 trillion marketing events, and 1.7 billion devices. It programmatic mobile demand platform helps customers deal with mobile ad challenges such as tracking, optimization, media buying, and integration.

Fiksu added more than 100 employees so far this year, bringing its head count to almost 300. It has driven more than 1 billion client downloads in the past nine months. It helps brands such as Coca-Cola, Disney, The New York Times, Dunkin’ Donuts, Groupon, and Topps by optimizing mobile ad targeting and enhancing marketing campaign performance.

“This has been a banner year of domestic and international growth, marquee customer wins, and unprecedented revenue milestones for Fiksu,” said Goldman, in a statement. “This financing enables us to continue to capitalize on the burgeoning market opportunities before us, and the partnership with Silicon Valley Bank — with its proven history of success working with high-tech innovators — will certainly help us to reach our expansive growth goals.”

“It is our pleasure to work with Fiksu, and other innovative companies around the world that are leading their industries, as they reach new levels of success and pursue ambitious goals,” said Dan Allred, market manager of Silicon Valley Bank in Boston. “Our aim is to help the Fisku team move its business forward quickly with the right financing, connections, and global services it needs as the company expands globally and prepares for its next phase of growth.”

Fiksu was founded in 2008 by Micah Adler as Fluent Media, and it changed its name to Fiksu in April 2011. It has raised $17.8 million to date, which includestwo rounds of equity funding from Charles River Ventures and Qualcomm Ventures.