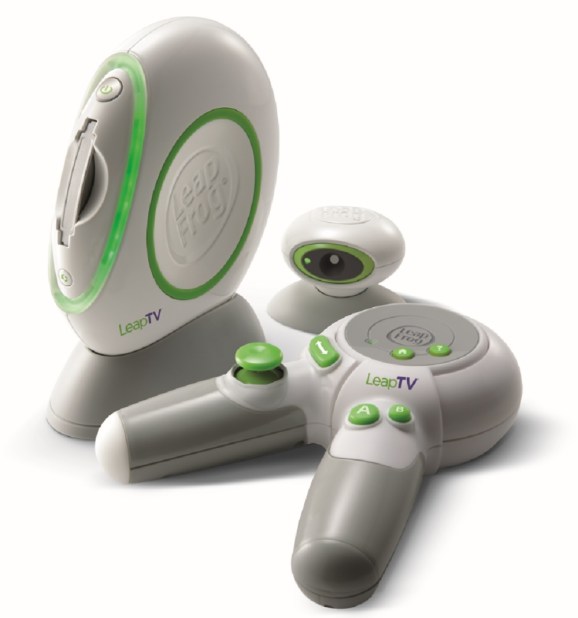 LeapFrog Enterprises has launched its LeapTV video game console for children with an educational twist — games approved by those who teach kids.

The LeapTV costs $150 and has a lot of content: eight games now, with 100 more educator-approved projects in the pipeline (and videos, too) for kids ages 3 to 8 later in the year. The new product is a bet that the living room console is here to stay despite the rise of the $20 billion dollar-plus mobile market — and that LeapFrog itself has a shot to carve out the market for smaller kids who enjoy educational entertainment (or more for their parents, who want their kids to learn while playing games). Kids will be able to play with personalization features and motion-sensing controls that are similar to those that Nintendo introduced with the Wii in 2006.

For almost 20 years, the Emeryville, Calif.-based LeapFrog has specialized in creating educational games for kids on its own platforms such as the LeapPad that combine fun and education.

LeapTV will have three ways to play, including a classic controller or a pointer. You can also play with motion-sensing controls, getting kids to be more active and off the couch. The machine aims to change the way kids learn by combining activity and movement with educational curriculum. You can transform the device into the type of control that fits the game.

The big question is whether the market will be a large one, as older children become aspirational and want the same kinds of devices that teens play with, such as iPods, iPads, game consoles like the PlayStation 4 and Xbox One, and Nintendo handheld devices.

The company has created a platform on which other developers can design video games that run on LeapTV. The content will run the gamut of reading, math, science, and problem-solving. Kids can level up their skills, and the games can adapt to the progress that the child makes. The child can personalize the user interface for their preference and age level.

The system is one more move by LeapFrog, which has been making educational games and toys, to keep up with the times. The success of the Xbox One and PlayStation 4 showed that gamers still want consoles in the home. Back in 2011, LeapFrog introduced its LeapPad Explorer tablet gaming system. But console makers haven’t addressed the early childhood market. Of 37,000 games rated by the Entertainment Software Ratings Board, less than one-tenth of 1 percent are rated “early childhood.”

The traditional controller requires two AA batteries and should last for up to 25 hours. The controller uses Bluetooth connectivity, and the system has a universal serial bus camera with a resolution of 640-by-480 pixels at 30 frames per second. It runs on a proprietary 1GHz chip created by LeapFrog, and it is comparable to an ARM Cortex-A9. The controller has a built-in accelerometer to detect motion. It weighs 1.2 pounds. There’s a USB port for the camera, Ethernet, and HDMI out. It has a gigabyte of DDR3 main memory, and 802.11 b/g/n Wi-Fi. It can output HD video at 720p.