It’s next to impossible to unseat a member of Congress in the same party, as roughly 90 percent of the House of Representatives are re-elected.

Campaign Chair Spinner and Bird of 270 Strategies have helped Khanna secure millions in donations from some of Silicon Valley’s leading figures, such as Sean Parker and Marissa Mayer. Eventually, their work landed Khanna the endorsement of major area newspapers. Despite the massive support, Khanna still trailed Honda by double digits for many months. 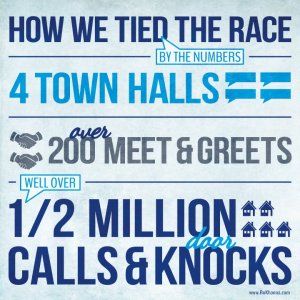 But now a recently released poll from CBS’s KPIX 5 shows Khanna in a dead heat with the incumbent (Honda with 37 percent, and Khanna at 35 percent). It’s difficult to overstate how impressive this is.

In the beginning, getting Khanna anywhere close to unseating Honda seemed like fantasy. So at this point, Team Obama have already proven that they are a considerable force in Silicon Valley.

We’ll keep you updated as the election nears.