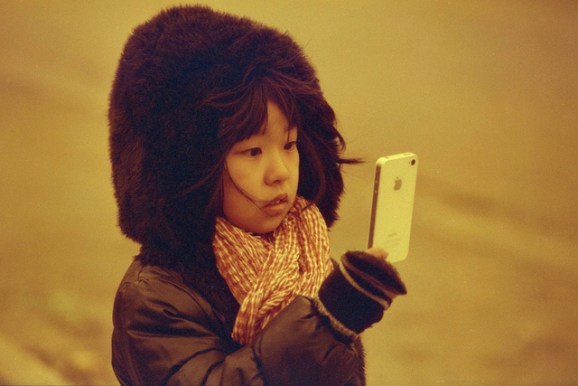 In an otherwise gonzo quarter for Apple, there were two notable soft spots. One was declining iPad sales, which was not a surprise. The other was a bit more unexpected: Sales in China were essentially flat.

Yesterday, the company said that revenue from “Greater China,” a category that includes Taiwan and mainland China, grew only 1% from the same quarter a year ago. Considering that China is Apple’s third biggest market and the one where there’s arguably the most opportunity, any sign of a slowdown is cause for concern.

In a conference call with analysts yesterday, Apple chief executive Tim Cook said he remained confident that the company was on the right track in China.

“When I look at China, I see an enormous market where there are more people graduating into the middle class than any nation on earth in history and just an incredible market where people bought the latest technology and products that we were providing,” Cook said. “And so we’re investing like crazy in the market.”

Earlier this year, Apple announced a breakthrough partnership with China Mobile, the country’s largest carrier, that many thought would put Apple’s sales on steroids. The partnership put Apple’s iPhones on China Mobile’s 4G network, which the company is in the process of building out. Cook, in the call, described 4G rollout in China generally as being in the “early stages.”

In addition, Cook said, Apple reduced the amount of overall inventory it had with channel partners in China this year by about $1.3 million in the most recent quarter, which also hurt comparisons.

The bottom line, for Cook, was that if you strip away the accounting issues, the number of iPhones that wound up in the hands of China-based customers grew 32%, year-over-year.

Given that IDC projected 13% smartphone growth in China, Cook said, “we feel incredibly great about that.” In addition, sales of Macs grew 54% year-over-year, also a strong result considering IDC projected that China’s PC market would shrink 7%.

“Those are two stalwarts that were really driving results,” he said.

And as for the iPad in China? “iPad concreted some during the quarter,” Cook said.

Going forward, Apple is still ramping up its investment in China. The company plans to grow from 15 Apple stores to 40 in China over the next couple of years. The reach of its online store now covers 315 cities in China, and developers in China have created 150,000 apps on the App Store.

“I see lots of very, very positive factors there, and I couldn’t be more excited,” Cook said.