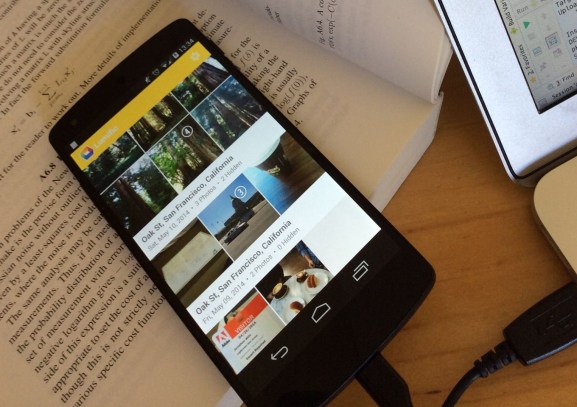 Although Dropbox has yet to acquire them as I previously predicted, Lumific is now releasing its app out of private beta and into the wild.

Lumific, a little startup that graduated from 500 Startup’s Batch 9 last June, has made a nifty mobile app that automatically sorts and edits the photos on your Android phone. After spending a few months in a private beta phase with about 1,000 users, the app is officially now in the Google Play store.

While this might sound like yet another photo-editing app, it’s a bit more magical than that. Once you’ve downloaded it, Lumific parses through your phone’s photos and organizes them into event-themed apps. Lumific defines an “event” as photos that were taken at the same place and time, more or less, such as all photos with similar timestamps in a particular park.

The app also automatically stacks duplicate photos and selects the best one to show you. I’m sure we’re all guilty of photographing that one orange tree six times because the first five were blurry, and deleting them seemed like too much work in the moment.

Lumific’s other awesome trick is the automatic editing of your photos, including enhancing (sharpening, fixed exposure, vibrancy), rotating, and cropping.

“We kind of do all the the things that someone would do with [Adobe] Lightroom or Photoshop,” said co-founder and head of Lumific’s Australian office Desmond Chik in an interview with VentureBeat. One of Lumific’s goals is to handle the editing process that fancy software like Lightroom makes too complicated for the average person.

There are lots of other small features and functions to the app, like “featuring” an event to make it more prominent. Play with the app and discover them all.

Lumific’s co-founders, Chik and Jonathan Wills eventually want to add sophisticated search capabilities to the app. Right now, it can do basic searches, such as looking for photos taken in San Francisco, which the geo-tag will bring up, or for a specific time, which the timestamp will surface.

But eventually, Lumific will surface “photos taken at the beach in July.” Using natural-language processing and computer vision, Lumific will be able to discern the beach in your photos taken in July and know that these are the ones you’re looking for. And while this sounds like a crazy feat, Chik, Wills, and team member Adrian Paul have all worked on the special effects for such movies as The Lego Movie, The Great Gatsby, The Chronicles of Narnia, and Happy Feet 1 and 2. Additionally, Chik has a Ph.D in computer vision.

This more sophisticated search function will be coming in the next few months, the co-founders told me. An iOS version of Lumific is also in the works, likely coming out in 2015’s first quarter (I’m crossing my fingers).

And in case you’re still wondering about whether Dropbox has or will take my advice and acquire these guys — it doesn’t seem like it’s happening right now. But if we wait long enough, Yahoo, the master acquirer of mobile startups and also owner of gigantic photo-community Flickr, could come a-knocking.

Chik and Wills did tell me, however, that they’ve spoken to a handful of huge companies (they declined to name them) about partnering up, which makes sense. For example, imagine if you could upload your entire vacation roll of photos to Facebook (as you do anyway) and have Lumific sort and fix them all. Or imagine if Lumific’s features were built into your Android’s or iPhone’s default camera app — no need to open an additional one.

Lumific was founded in August 2013 and is based in the Bay Area and Sydney, Australia. The company has raised a small undisclosed amount of funding just to sustain themselves and plans on finishing out its seed round at a later date. 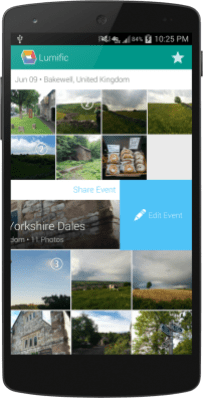