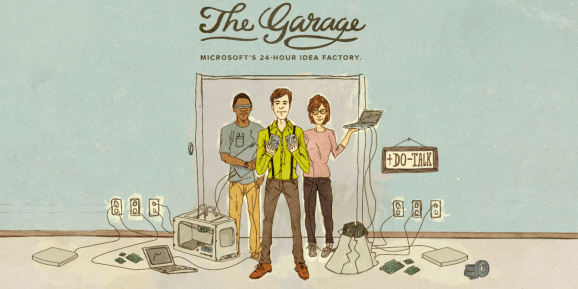 Microsoft today launched a new section on its website: The Microsoft Garage is designed to give the public early access to various projects the company is testing right now. The team is kicking off with a total of 16 free consumer-facing apps, spanning Android, Android Wear, iOS, Windows Phone, Windows, and even the Xbox One.

Until today, Microsoft Garage was a group inside the company that supported side projects, hackathons, science fairs, and general tinkering. Started in 2009 within the Office Labs group, the goal was to create a “safe place” for Microsoft employees to build their crazy ideas and foster grassroots innovation at the company.

The group now has 32 chapters around the world with about 10,000 active members. Microsoft Garage is still going to be everything it has been so far, but Microsoft has simply decided it’s time for the public to get involved too: You can now test the wild projects the company’s employees dream up.

In short, Microsoft wants to be a better experimenting company. “The next chapter is putting these projects in the hands of real customers to help us make better driven decisions about future plans,” Jeff Ramos, Microsoft’s Manager of The Garage, told VentureBeat. 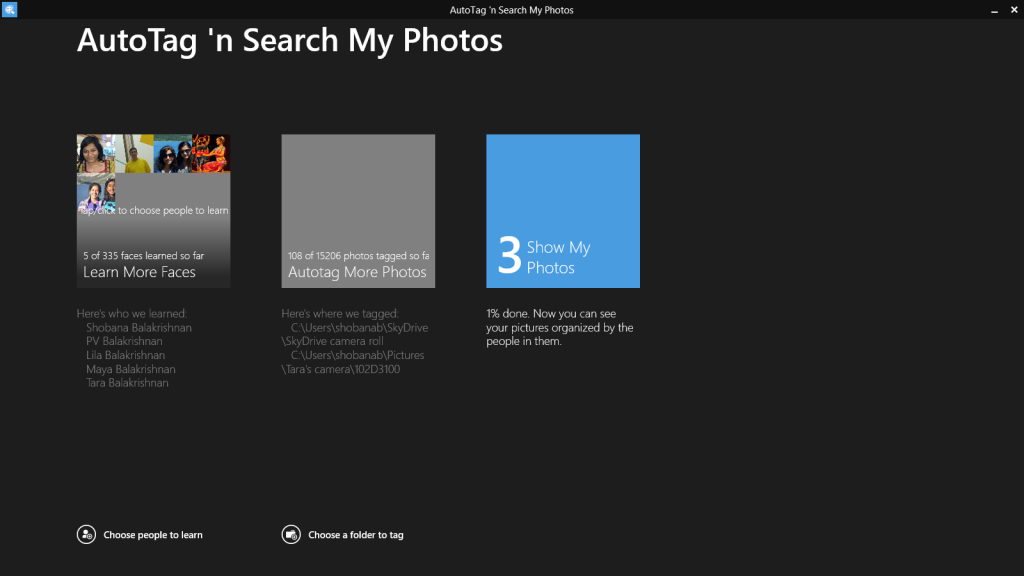 We stumbled across the imminent launch of The Microsoft Garage when we discovered AutoTag ‘n Search My Photos earlier this week. The app hadn’t launched yet, but Microsoft Research had posted details early, so we learned all about how it uses your Facebook account to automatically tag friends in all your other photos. You can read our previous coverage here and finally download it today from here.

In addition to AutoTag, there are 15 additional apps debuting on The Microsoft Garage (they will be trickling out slowly, so don’t worry if you can’t grab every app immediately). Below you will find their descriptions and download links via the respective app stores. 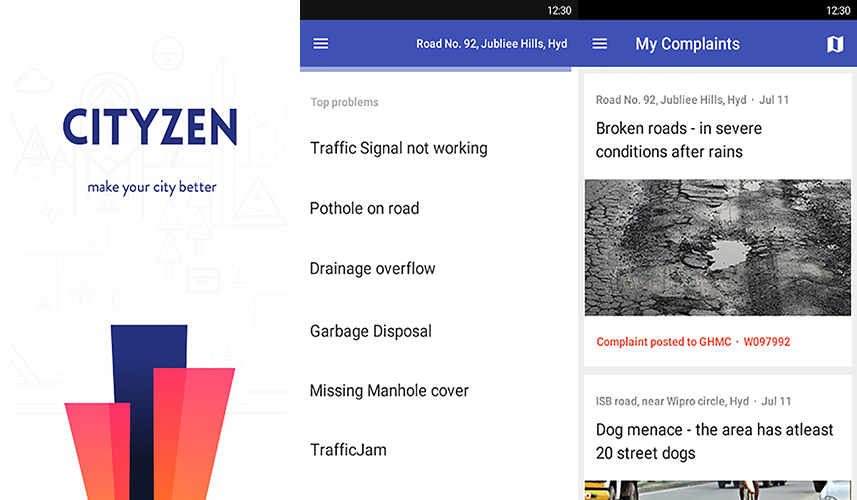 This is a “technology for good” app designed to help citizens connect to municipalities, letting them report issues or civic infrastructure concerns. For example, you can take a picture of a pothole that is causing a traffic jam, mark the location on the Bing map (you don’t need to know the exact address), and let civic authorities know.

Unfortunately, the initial version only supports Greater Hyderabad Municipal Corporation (GHMC) in India, and interest from the government is clearly a requirement. You can download CityZen for Android and Windows Phone. 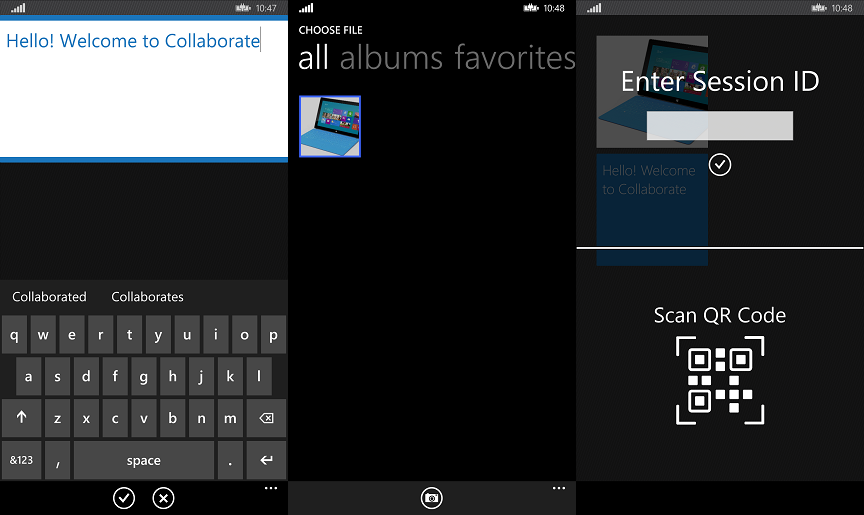 This app lets you host or join sessions on canvases made up of text cards and images. You and multiple other users can draw on the canvas to organize content, or manipulate the text and images using pinch, drag, and rotate gestures.

You can download Collaborate for Windows and Windows Phone. 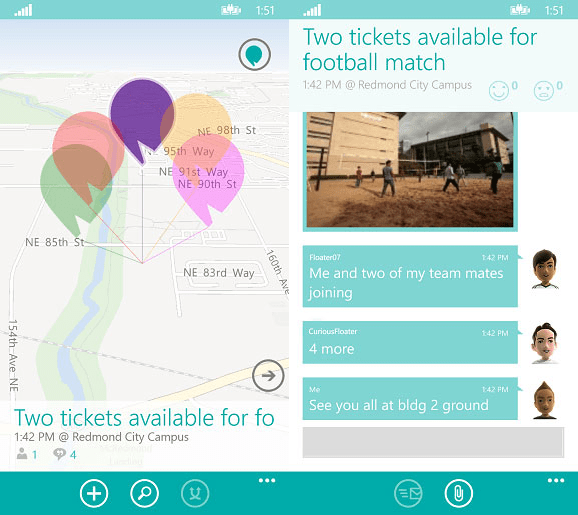 This is an app designed to let you float an idea out to the people around you to see what they think. You can join nearby Floatz conversations as well as start your own with a question, an idea, or an image that you share anonymously. 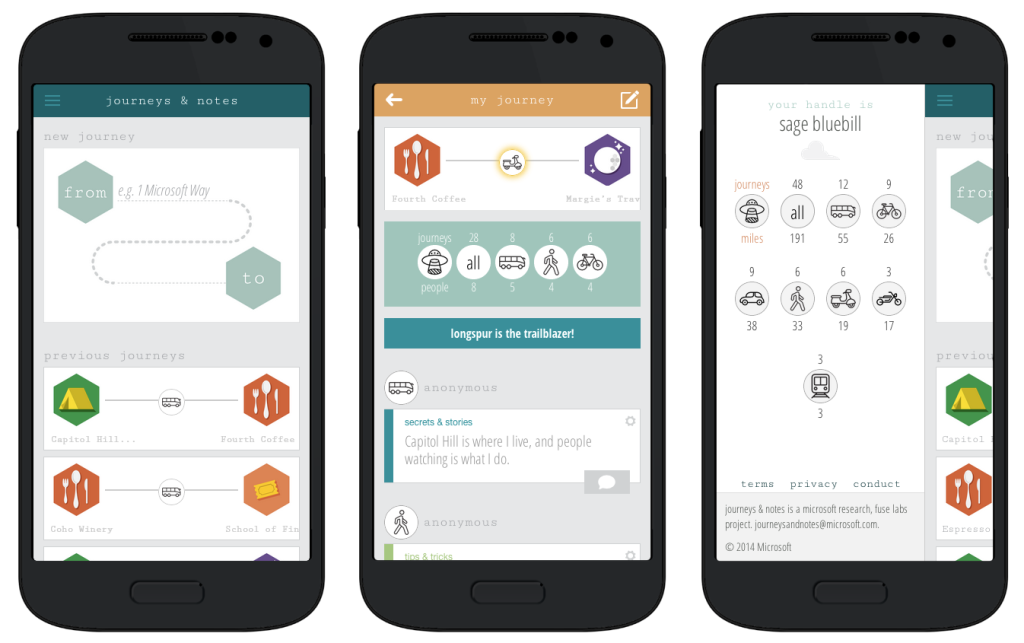 This is a social app meant for the space between an origin and a destination: It connects you to a community of people who have traveled the same path that you’re on. Whether you’re taking the bus to work or jet-setting across the globe, you can both leave behind notes for others to discover and read what others have shared.

You can download Journeys & Notes for Android. Lawrence Ripsher, Partner Group Program Manager, told us this app will come to iOS and Windows Phone next.

This is a game where you help Walter the turtle find his way home. You control the two thrusters on Walter’s jetpack to navigate through mountains and volcanos with the goal of getting him home to the water.

You can download Lost Turtle for Windows and Windows Phone. 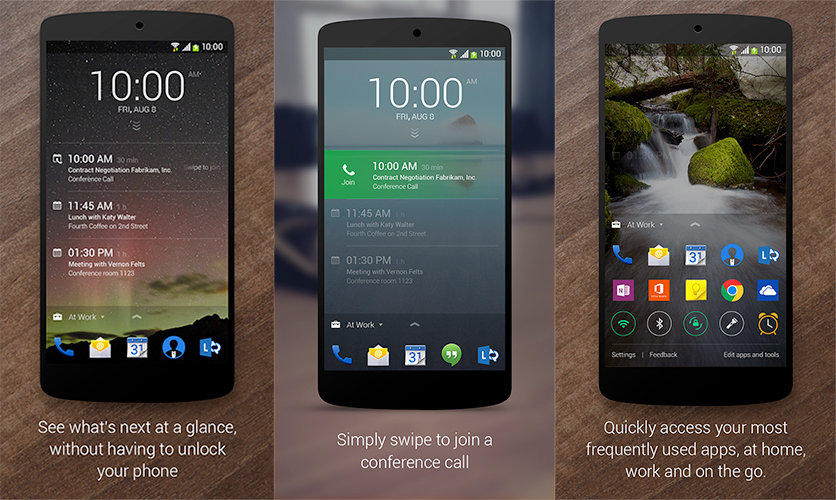 This is a lock screen app that saves you time by surfacing information and apps depending on your location and what you’re doing. You can see your calendar, missed calls, emails, and text messages, as well as swipe to call into a meeting when it starts, all without unlocking your phone. 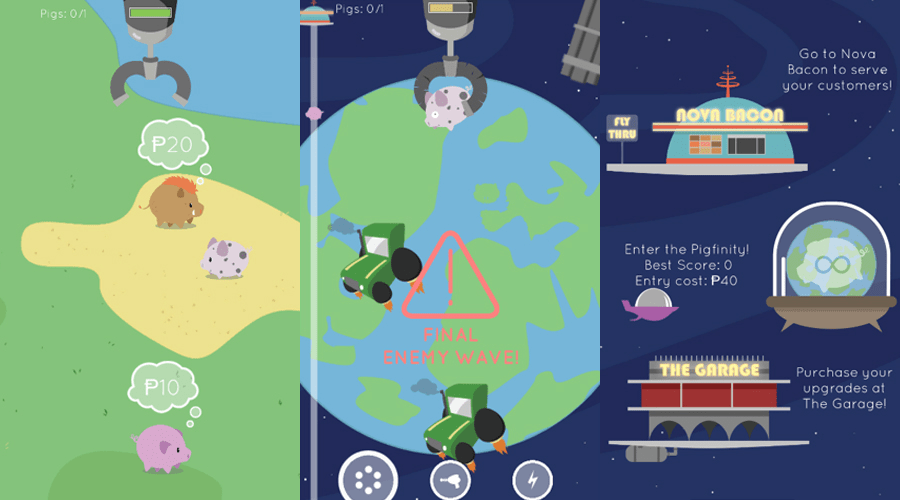 This is a game where you control an alien foraging for food. Armed with a gigantic claw, you must go down to Earth and fetch a pig while defending yourself from humans. You can also Earn money to upgrade the various weapons available to you. 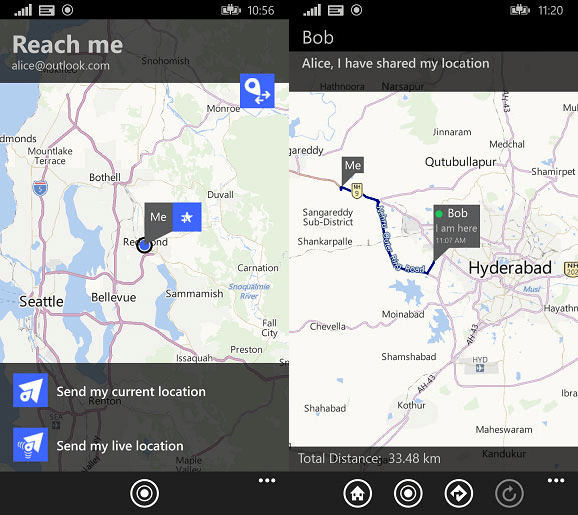 This app lets you share your location and turn-by-turn directions to get to you. You can guide friends to your location in real-time, with easy-to-follow updates as you move from place to place. Location tracking expires at the time you set, so you control how long they can follow you. 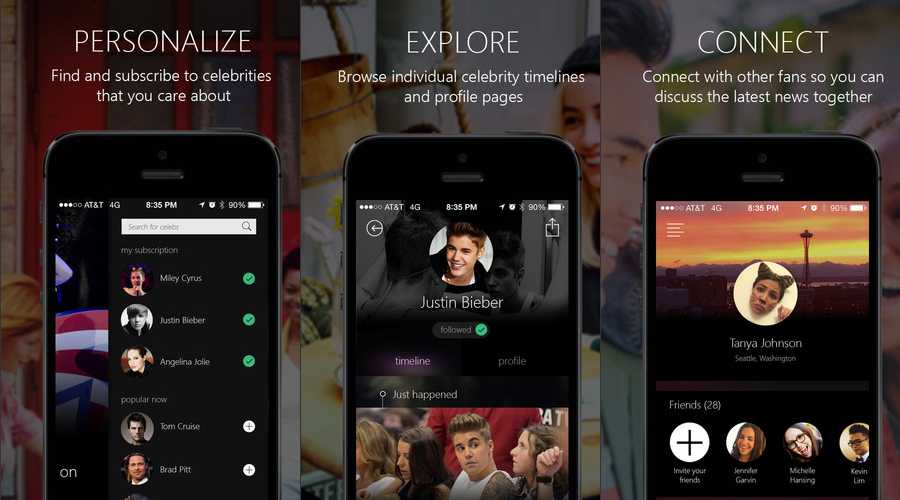 This app actually first arrived two months ago. It gathers the latest celebrity news, giving you a list of the biggest headlines and letting you subscribe to specific famous people. While this one technically isn’t new, it now has a home. 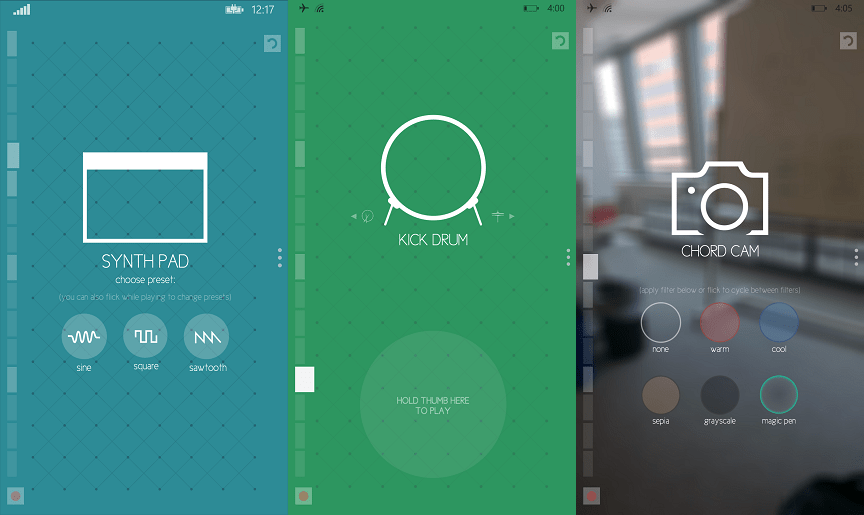 This is a music creation tool that aims to cater to everyone from beginners to the most seasoned musicians. You can tap to hit virtual drums, press and drag across the synth pad to create masterful melodies, use the surrounding environments to play chords with the camera, and combine all three to create loop-based compositions.

This tool lets you upload your course documents and student planner. From there, it will extract the important information for you, add events to your Outlook calendar (it will remind you later via notifications), create OneNote pages for your classes, and store documents on your OneDrive. 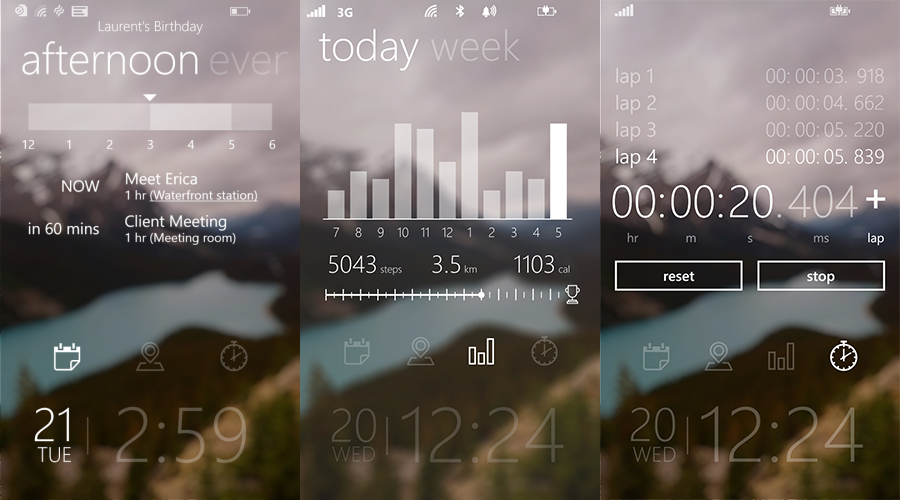 This is a lock screen app for improving the relationship between the user and their notifications. There are individual widgets for your agenda, current location, stopwatch, and activity tracker. 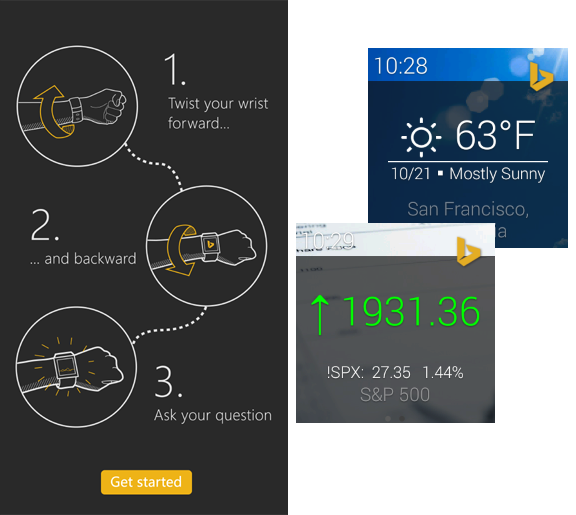 This app removes the need to say “OK Google” to ask your Android Wear a question. Instead you can just lift your arm, twist your wrist, and ask Bing “What’s the weather going to be tomorrow?” or “How tall is Obama?”

This is an RTS space and top-down shooter game. It can be played with up to eight controllers and anyone in the room can issue voice commands to try to stop relentless attacks.

You can’t download this game yet as it’s labeled “Coming Soon,” but Microsoft wouldn’t include it in the launch list if “soon” was a stretch. Update It’s available now. You can download it for Xbox One. 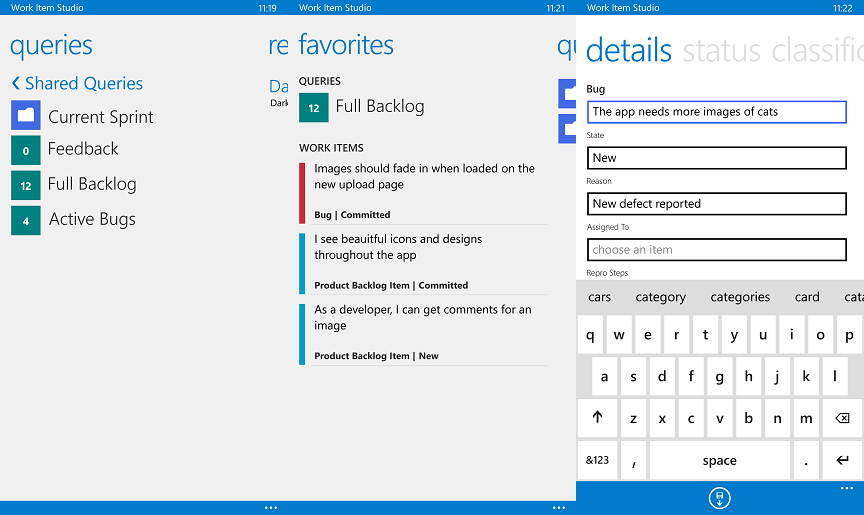 This app lets you view, create, and edit work items from your projects in Visual Studio Online. You can also see a list of all your queries (and the number of results in each of them), run your queries to see detailed results, and track work items and queries by favoriting them.

You can download Work Item Studio for Windows Phone.

These apps come from a diverse background. A few were created in hackathons, others as side projects, and some were even formal projects sponsored by business teams. Their creators range from interns to individual employees to whole product groups.

Regardless of their origin, all apps are reviewed first by an internal audience of Microsoft employees. Comments and suggestions are made to developers on a daily basis before an app or game heads to a store.

Going forward, Microsoft tells us, it will be gauging how people respond to all these apps. This will come in the form of explicit feedback (such as what users are saying on social channels and in app reviews) as well as implicit feedback (all the apps are instrumented, so Microsoft can learn from their actual usage).

The company will look at usage patterns to figure out what works and what doesn’t. For example, if Microsoft notices many users are taking multiple steps to get to a feature or use case, it may update the app to simplify the process.

Ramos tells us the company has not set a quantity threshold for how many apps it wants to release in a given period. The goal is simple: Produce something with a value proposition and see if it really does deliver value.

For a long time now, Microsoft has tried to encourage rapid innovation within the company. Some teams are better at this than others, but there’s always room to grow.

The Microsoft Garage is a realization that the best way to speed up the process is to get feedback on what its employees are tinkering with. A multitude of projects already exist within the company’s walls, so why not release them to the world and see which ones are really worth pursuing?