Email is a real pain in the neck, but Google’s upcoming email application, Inbox, could dramatically cut the time wasted on the task. VentureBeat got an early hands-on with the application, and Inbox instantly became my favorite new email application, despite a few glitches and missing features (below is a promo video of what it looks like).

Inbox seems to be built around Google Executive Chairman Eric Schmidt’s No. 1 email rule: Be responsive. Inbox allows me to respond quickly and set reminders so that I follow up in a timely manner.

Below are three major reasons I’m a big fan of Google Inbox:

Until I got my hands on Inbox, the Mailbox app was my favorite mobile app. The main feature in both apps allows users to archive emails with a quick swipe right. Most importantly, swiping left brings up a dialog box that will send an email back to the inbox if it isn’t responded to by a certain time. 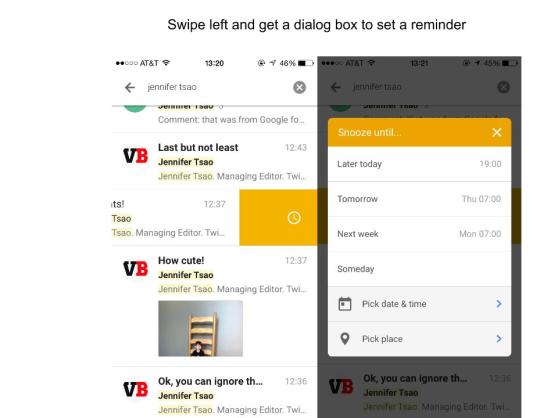 I use the reminder feature constantly; it ensures I don’t forget about emails and allows me to efficiently schedule emails throughout the coming weeks and months. For time-sensitive emails, I can even have it boomerang back in a few hours if I don’t receive a response.

Unlike Mailbox, however, replies are all handled on a single screen. It just opens up some space at the bottom of the reply. This may seem trivial, but every additional screen adds effort — which can total many minutes per day of wasted time. 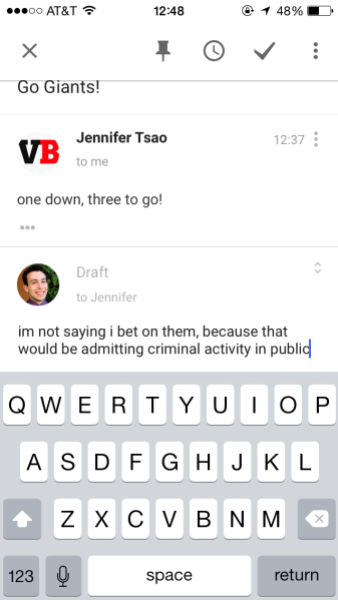 Inbox has a cool feature that sends messages and reminders back to the inbox when users arrive at a location. So, for instance, say I set a reminder to mail my absentee ballot on my way to the 16th St. Bart station. Inbox tracks location in the background and sends the email back to my inbox (and, if I choose, will buzz me with a reminder) when I get to the right spot. 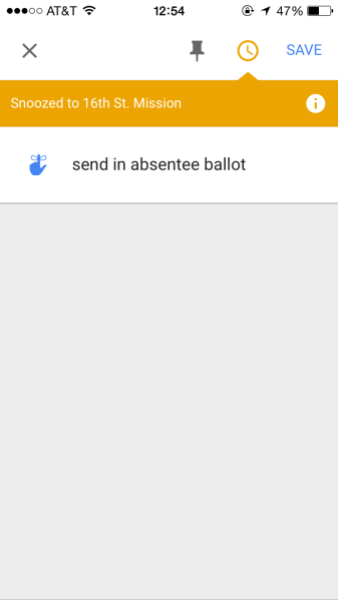 I attempt to set email reminders all the time for meetings. I’ll try to schedule emails to return to my inbox around the time I’m supposed to have a dinner meeting with someone. This way, I can just schedule all my previous emails to return when I arrive at the restaurant.

It works with Gmail Priority Inbox

Gmail Priority Inbox is absolutely the best feature I use for email. It’s an algorithm for Gmail users that automatically categorizes messages as “important” and “everything else.” After a few weeks of training, Gmail’s artificial intelligence is almost perfect at knowing which messages are actually important, and which ones are promotional or low-priority. Inbox sorts my messages for me and lets me skip over low-priority ones.

A handful of nice features, annoyances, and features I wish it had

Let’s start with the extra things I like. I like that users can select multiple messages at a time to either archive or set for reminders. Second, I really dig that searching for certain topics or people brings up their contact info and all the recent emails. 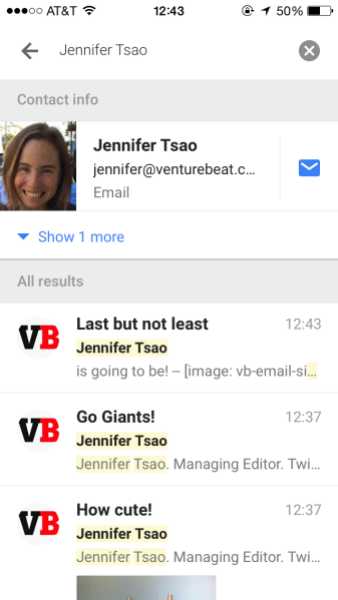 The one big missing feature that I like from Mailbox is preset reminders. I often set reminder emails for the weekend or the beginning of the next week. Mailbox allows me to efficiently schedule these. There is no similar feature in Google’s Inbox.

Second, Inbox needs better alert settings. Sometimes I want to be buzzed, but, right now, its push notifications are way too frequent. I’ll be turning it off until I get better control of what email messages buzz me.

Finally, neither Inbox nor Mailbox are good at adding or removing recipients to and from the cc: field. On the desktop, I can easily drop and add recipients to different parts of an email, depending on who should be in the conversation going forward. Inbox is slightly better at this than Mailbox, since it allows users to copy and paste an email in a different field. But it’s not a efficient at all.

Other than these gripes, Google Inbox is a fantastic email application. Hopefully, the public will have access to it soon. We’ll update readers as more details come in.