Google has expanded its search engine with the capability to recognize video games. If your query references a game, a new Knowledge Graph panel on the right-hand side of Google’s search results page will offer more information, including the series it belongs to, initial release date, supported platforms, developers, publishers, designers, and even review scores.

For those who don’t know, Knowledge Graph is the company’s project for mapping out the real world, be it physical objects, important landmarks, or famous people. It doesn’t just power Web searches; mobile and voice searches tap into it, too.

Since the above only shows the Play Store, we searched for “Candy Crush” on the Web and saw that it listed Apple’s App Store as well. We also contacted Google to find out whether it was only keeping track of mobile games. Nope.

“We always want to help people find the best answers to their questions – fast,” a Google spokesperson told VentureBeat. “With today’s update, you can ask questions about video games, and (while there will be ones we don’t cover) you’ll get answers for console and PC games as well as the most popular mobile apps.”

Indeed, searching for my favorite first-person shooter yields this result: 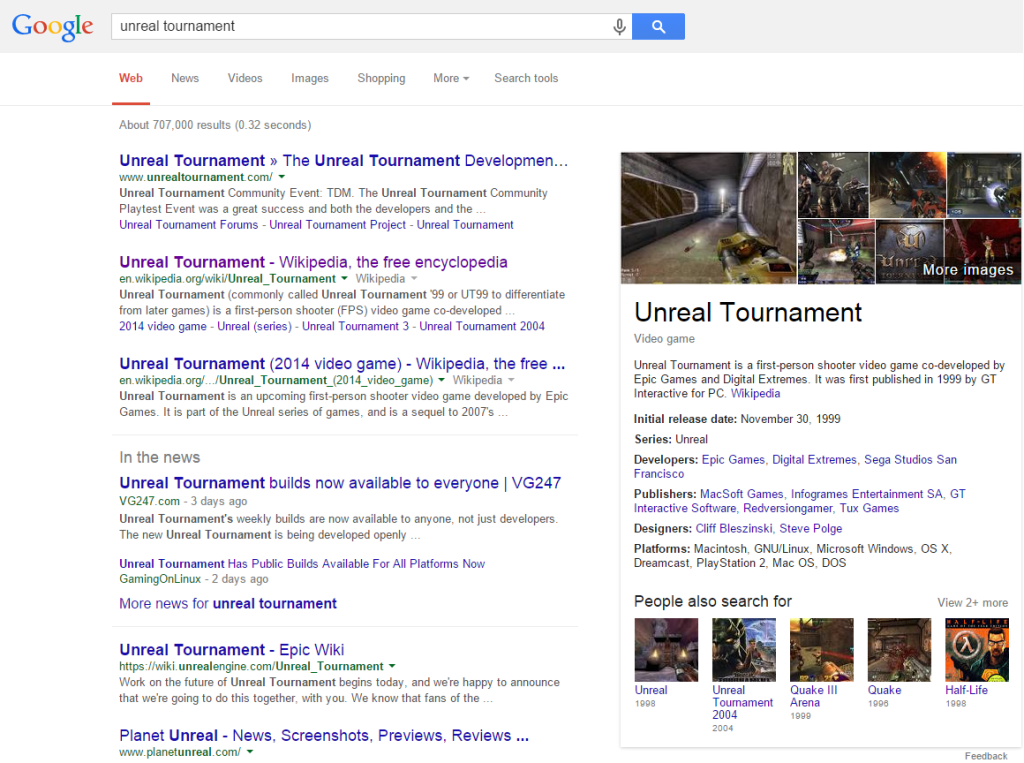 You should also note the “People also search for” section is included just like on other Knowledge Graph panels. In the case of Unreal Tournament, similar searches include a related game, a game from the series, and three other popular shooters for PC.

It’s worth noting that this feature doesn’t seem to be U.S.-only. Unlike Microsoft, which unnecessarily limits new features stateside, Google has rolled out this feature to multiple countries.

While we did confirm it works in North America and many European countries, we did notice it’s not available everywhere just yet. Google Poland, for example, does not yet detect video games when you search for them. We expect Google will eventually add support for all the regions it offers its services, but it’s not quite there yet.