The North Slope of Alaska is a hostile place for a little girl and her animal companion. In Never Alone, they’ll have to wade through fierce blizzards, avoid polar bears, and outrun mischievous spirits. The real-world stakes of their adventures, however, are even more pressing. Resting on their shoulders (and on the team of developers and Alaska Native elders who worked on the game) is the potential success of a new genre: world games.

According to Never Alone creator E-Line Media, world games celebrate the unique stories and perspectives of indigenous cultures. But the company doesn’t want you to think of these merely as educational games. It wants to create entertaining experiences that can compete with other games while also raising awareness of underrepresented communities. E-Line Media also looked at indie hits like Journey and Braid as proof that smaller games with new voices and innovative gameplay can succeed.

The tale of Nuna and her mystical white fox is the first result of that experiment. Out on Nov. 18 for PlayStation 4, Xbox One, and PC, Never Alone is a 2D puzzle-solving and platforming game based on a story passed down through multiple generations in the Alaska Native Iñupiat culture (you can read more about the culture’s close relationship with E-Line Media here).

“A lot of people feel like digital media and video games have distanced youth and young adults from their culture, their language, and their heritage,” said E-Line Media president Alan Gershenfeld. “Why not use this incredibly powerful medium to reconnect youth in a really playful, fun, and engaging way? With not only other cultures, languages, and heritages, but with their own culture, language, and heritage. And that’s kind of the world games thesis.” 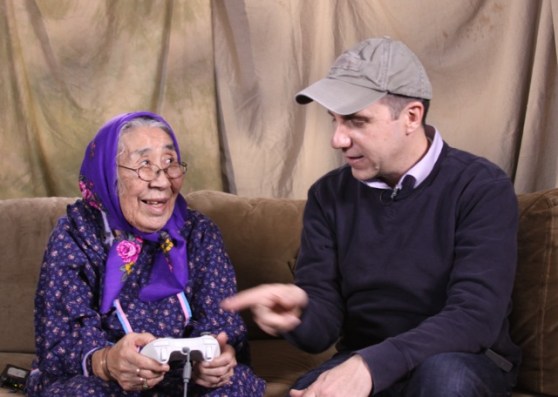 Above: Minnie Gray (left) is the daughter of Iñupiaq storyteller Robert Cleveland. The story of Never Alone comes from one of Cleveland’s tales.

This is brand new territory for Gershenfeld, a veteran developer who ran publisher Activision’s studios from the early 1990s to 2000. When he left, he became the chairman of Games for Change, a nonprofit that believes games can be used to benefit the public. A few years later, Gershenfeld took that idea one step further when he cofounded E-Line Media to, as he says, “bring some of the best practices of game design, development, research, and publishing to the impact games sector.”

The idea for Never Alone came from the Cook Inlet Tribal Council (CITC), a nonprofit organization that provides social, educational, and employment services for Alaska Natives living in the Cook Inlet region. But when it approached E-Line Media about making the game, Gershenfeld said that they initially tried to talk CITC out of it. Game development is a risky and expensive process even for established developers, let alone for a group who has never made a game before.

E-Line Media and CITC decided to take their time with the project and see if this type of game could actually work. They spent three months analyzing representations of indigenous people in pop culture and found successful (and profitable) examples in music, movies, and comic books.

“But [we found] very little in video games that were genuinely co-created, genuinely representing these cultures with really great gameplay,” Gershenfeld explained. “And we thought, maybe there is an opportunity here.” 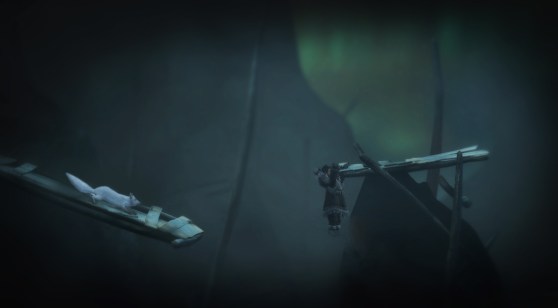 Above: Never Alone supports up to two players. If you’re by yourself, you can take control of the girl or fox at any time.

Cultural immersion for both sides

According to Gershenfeld, world games need complete commitment from both parties: from the game devs and the indigenous community they’re helping to promote. For Never Alone, Iñupiat elders, writers, and storytellers worked alongside E-Line Media’s Seattle-based Upper One Games team, and they had input on all aspects of the game to make sure the representation of their culture felt authentic.

“[This process is] not just game developers finding and either appropriating or co-opting [another culture],” said Gershenfeld. “This is authentically co-created, which just creates a different synthesis. It’s not that one is necessarily better than the other, but it is very different in terms of how the synthesis works.”

“It’s funny. Even before they started their discussions and their meetings, watching admin — people upstairs — playing just everything from Flappy Bird to iPhone games to playing some console games — they had to learn so much. We all did, really,” said Watson. “I’ve been a consumer for years, but I don’t know the industry. It’s been really neat having E-Line Media guide us on that side of the mission and really learn the industry.

“But we’ve also provided support on our end to help them with the cultural aspect and traveling around the state and really immersing them in the Alaska Native culture. It’s been this reciprocal relationship that’s just been fascinating.” 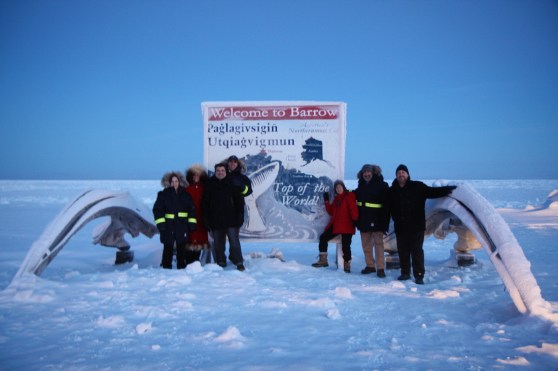 Above: The dev team visits Barrow, Ala. They’ve flown to Alaska over a dozen times since work began on Never Alone.

Never Alone opened the door for other cultures

E-Line Media didn’t have to wait until Never Alone’s release to get attention from other indigenous cultures — some of them reached out to the company soon after it posted the first trailers online. While the developers will continue to explore Alaska Native mythology in future world games, it has begun talking to these diverse communities for potential projects.

“A lot of it is finding a development team and cultural ambassadors that are ready to go on a multi-year journey together and really do it in a collaborative way,” said Gershenfeld. “I think that’ll unlock new genres, new platforms, new approaches. And to us, that’s very, very exciting. …[Working on Never Alone for the past two years] has been a really complex but really fascinating and wonderful process. And I think it’s one that all of us are excited to go on with new cultures and new journeys.”

One group of people that they started talking to are the Native Hawaiians. Gershenfeld says Hawaiian and Alaska Native cultures overlap “in a lot of interesting ways.” And since the 50th state is much warmer than Alaska, the team is looking forward to spending some time there.

“Actually, all of the [people] we’re talking to [live in places that] just sound so exciting to go visit … and to get to know in an entirely new way,” said Gershenfeld. “Much like the Alaska Native folk got to know the fascinating, crazy culture of video games.”