Mobile may be the hottest game market, but massively multiplayer online games on the PC are expected to grow from $11 billion in 2014 to $13 billion by 2017, according to market researcher SuperData Research.

Joost van Dreunen, the CEO of SuperData Research, wrote that the MMO market has changed dramatically in revenue, player preferences, and the size of its potential audience. One of the clear winners from the changes is the free-to-play League of Legends, a multiplayer online battle arena game (MOBA) where five players take on five in a game with a furious pace. Riot Games’ League of Legends has already generated $946 million so far in 2014, accounting for 11.9 percent of the overall market.

But SuperData said it is worth noting that Wargaming’s World of Tanks, which is No. 5 on the rankings of MMOs with $369 million in revenue, monetizes much better on a smaller user base. The success of MOBA titles tells us the market is shifting to free-to-play, but the traditional subscription game World of Warcraft from Blizzard still generated $728 million this year from subscription revenues. The game is launching a new expansion, Warlords of Draenor, this fall, and it is expected to grow to 8.2 million subscribers by year end.

Online games are 21 percent of the overall digital games market. SuperData has looked at the spending habits of 37 million digital gamers.

The latest data shows that incumbent titles like SmileGate’s Crossfire ($897M) and Nexon’s Dungeon Fighter ($891M) are holding on to their leadership positions, and Valve’s Dota 2, a MOBA with $136 million in revenues, is coming on strong.

Asia remains the biggest market for free-to-play MMOs, with $4.2 billion in revenues. That compares to $3.1 billion in North America and $2.1 billion in Europe. 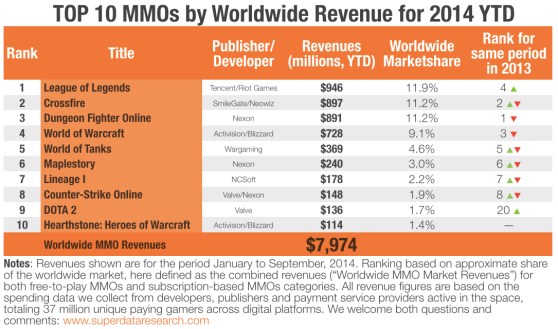 Above: MMO rankings from SuperData