Sid Meier’s Civilization: Beyond Earth is going to be another must-play for fans of the long-lived series. You’ll find it mesmerizing to discover something new with every hexagon you traverse on the alien planet where you’ve landed after humanity takes to the stars, but you’ll also be annoyed that some aspects of the strategy game are more quirky or complex than they have to be.

Those flaws make Beyond Earth imperfect. But fans who love the series are going to enjoy this one, too. If you can master it, you’ll find that Firaxis has created a vast canvas for play, exploration, and strategy with its latest Civilization game. Here, science meets science fiction, and the result is a lot of fun. (For more on what the setting allowed designers to do, see our GamesBeat interview.)

This cerebral take from the 2K Games division of game publisher Take-Two Interactive Software and developer Firaxis Games is the latest Civ strategy game for the PC. In contrast to many previous Civ games that start with ancient societies, this one begins as humanity escapes global warming on Earth and heads for the stars. At the same time, the hexagon-based movement and city-building is familiar to Civ fans. The planetary graphics are beautiful, with landscapes varying from jungles to oceans and deserts. A spooky “miasma” covers many areas, and you’ll have to clear it out or suffer damage when you move your military units into these places. You’ll find miasma can actually be useful if your goals aren’t military in nature.

As you build your civilization, you’ll find your strategy will change. At first, you have to survive. Then you have to expand and grow. And finally, you have to think seriously about achieving a major goal and achieving victory. I really liked each part of this story arc as I built my brave new world. 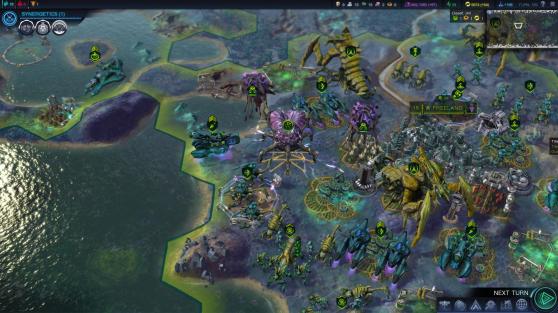 Above: A small section of the vast world to conquer in Civilization: Beyond Earth

If you’re a Civ fan, you’ll never get tired

You can play Beyond Earth forever. You start by selecting a sponsor, assembling a spacecraft, choosing your cargo and colonists, and then launching. You can choose from among eight leaders. Once you land, you create a city and then send out your Explorer to push back the “fog of war,” or darkened areas which you have not yet explored. It’s fun to send Explorer units out in various directions and find random rewards or dangers along the way.

As you invest in research, you discover the Tech Web. It’s fascinating to look at all of the ways you can expand your research. If you study one tech for a number of turns, you can unlock it and reap new benefits for your society. You can research in a driven direction, or dabble in everything in a nonlinear fashion. The downside of this web is that it’s hard to understand. You have to spend a lot of time in the “Civilopedia” figuring out what each new innovation will bring to you. That gives an endless amount of material to learn.

At the outset of Beyond Earth, you make some decisions about which colonists you will take with you, your cargo, and what type of leader you want. You choose one of three different types of societies. Once you make these abstract decisions, you then emerge on a planet with your colony. Although we’re in the space age, movement across the terrain is still unbearably slow, given the large scale of the map and the usual slow-paced gameplay you expect in a Civ game.

I found this game refreshing because it is both so different from the original Civilization of 1991 as well as the last space-based Civ game, Sid Meier’s Alpha Centauri, which debuted in 1999. At the onset, I had to just fight to keep my single city alive. While other leaders were no doubt expanding, I had to fight off aliens spawning from a nearby nest. And I also had to deal with a nasty nearby rival faction leader. That was a difficult way to start out, and it was exhilarating to survive it. By turn 400, I had turned the tables on him.

You can choose three different “affinities” for your society: harmony, purity, and supremacy. With Harmony, the goal is to alter the human identity through DNA modification so that it achieves symbiosis with the new planet. As a pursuer of Harmony, your visual identity is unique.

The Purity affinity is a return to the classical Greek or Roman views of the world from Earth’s past in the way that they prefer to change the world to suit humans. In this view, they also don’t want to occupy just a single planet. Any research you pursue in the technological web can improve your progress toward your affinity goal.

Supremacy is the road where humans try to dominate their world and environment, and they try to live independent of the world. The Supremacist societies turn to tools to overcome the environment, and they develop unique technologies and architectures for their cities. You can research things like “synthetic thought” that will increase the affinity for Supremacy. I chose this path, but it wasn’t nearly as easy as I expected it to be.

Each world has a different “biome,” or basic environmental theme. You can have a “lush biome” that resembles a jungle world, a “fungal biome” with strange fungi all over the place, and an “arid biome,” or desert world. As you move from tile to tile, you discover resources or nests of aliens.

You can create Wonders like the Gene Vault, which preserves the genetic material you brought from Earth. You can create the Panapticon, which makes your society more efficient and protects your borders. This gameplay structure gives you an endless number of things to explore and it has a ton of replayability.

I found it made sense to expand peacefully, build a strong defense force, and add a ton of cities. Trade was particularly lucrative. And war really hurt all of the parties. 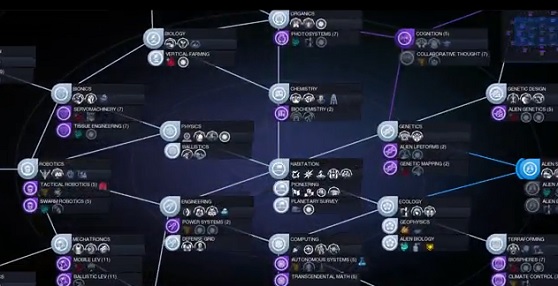 Above: The tech web offers nonlinear R&D in Civilization: Beyond Earth

Civilization games can bring a game PC to its knees, not because of its demanding graphics but because of all of the calculations it has to make when you hit the “end turn” button. But Beyond only crashed on me once during the time I played with it. Even better, you can actually zoom in and zoom out on of the planet map while those calculations are happening in between turns. You can look at the orbital layer, which is an overlay on top of the main map, and study the various details on the map. The turn doesn’t take nearly as long to complete as in years past, and you can amuse yourself by looking at the map while as it finishes. This helps get rid of one of the most frustrating parts of past Civs.

The ambient music that plays throughout the game gives you a sense of wonder, fear, and grandeur all at the same time. I never tired of listening to the music, which I found to be both relaxing and inspiring. At times, the music will make you feel like you’re watching the awe-inspiring film Contact, and at others, you’ll feel like you’re Attila the Hun. 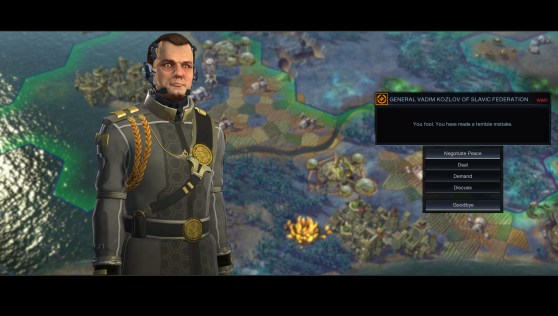 Above: Vadim Kozlov, the leader of the Slavic Federation in Civilization: Beyond Earth.

The faction leaders are unpredictable

The human leaders are a multicultural mix: Daoming Sochua, leader of the Pan-Asian Cooperative; Samatar Jama Barre of the People’s African Union; Kavitha Thakur of the Kavithan Protectorate; and Suzanne Marjorie Fielding of the American Reclamation Corporation.

My nemesis was Vadim Kozlov, the leader of the Slavic Federation. He landed on the planet just about 10 tiles away from my own. That meant that sooner or later, we were going to tangle. I kept my watch on him and expanded in parallel as he did across the same continent. About midway through the game, I sent both an army and my naval units across a sea to attack a few nasty alien nests. I was creating a lot of veterancy among those units by chewing up the aliens.

That was when General Kozlov, who was clearly pursuing the Supremacy Affinity, launched a surprise attack. He was after one of my isolated cities at the end of a peninsula, near his own capital. He sent combat rovers, advanced infantry, and ships against me. But I learned that the cities themselves have powerful artillery that can take out a unit in one or two shots. I brought my navy back and pounded the general’s army from the sea. He bombarded my weakly defended city, but he couldn’t take it over. After a while, I was able to send some payback his way, as I had twice as many cities. He sued for peace. I expected that, but he surprised me by offering me control of one of his cities. I gladly took it.

That surprise attack showed me that the computer-controlled players weren’t idiots. I left the general an opening, and he marched into it.

Your patience is rewarded

For a while, I worried that Kozlov was getting too powerful. He expanded an island city so much that I couldn’t move my ships without violating his borders. That assured that I would have to fight him again in order to get rid of that island city.

I played a patient waiting game with Kozlov. He launched a second attack, and I drove him back again. Then he surrendered the island city. I had been doing a brisk trade with him. But I diverted the trade to other factions. Then I was able to starve the general into weakness. Eventually, I launched a third war against him and brought down his capital. That took hundreds of turns, but I was glad I didn’t have rush into decisions or deal with other attackers in the meantime.

Even though you’re in a race with other factions, you have to plan things like wars over many turns. If you do, you’ll be like a chess player who can see many turns ahead.

Not only do you have to fight on the surface of the planet, you can take the expansion and aggression into space. You can send solar collectors to gather more energy in the orbital layer around the planet. You can also send weapons platforms and communications systems into orbit. I had a lasercomm system that I used to set up communications with Earth. But Kozlov used his artillery to shoot it out of the heavens. One problem: the solar collectors aren’t cheap to build, and they don’t last forever. Eventually, the satellites fall out of space to the planet.

Many paths to win

You can win the game in five ways. With the Purity Affinity, you can construct an Exodus device, connecting the new planet to Earth and bringing its survivors to the promised land. In Harmony, you win by connecting the different sentient beings on the planet. The Supremacy Affinity can win by sending a peacekeeping force back to Earth with a load of technological discoveries. You can also win by making contact with a new alien race. In Domination, you capture the capitols of all of your enemies. But you don’t have to destroy everything else in order to win.