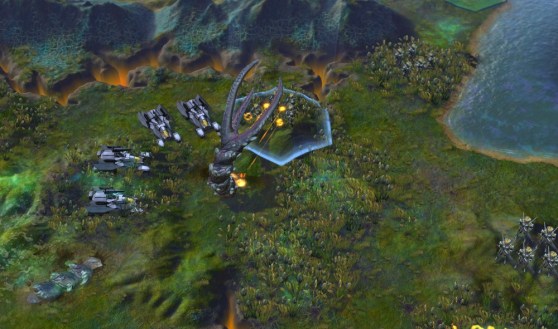 Above: Giant worm in Civilization: Beyond Earth

Beyond Earth opens with a dramatic movie-like cutscene dubbed “The Chosen.” A Middle Eastern man sends his daughter to a camp. She boards a rocket and takes off to the stars in search of a new home. The image of the father watching his hopes and dreams take off in that rocket is a moving one. But in terms of a movie-like story, that’s all you get. You never find out what becomes of the girl as she arrives at the new world for a new beginning for mankind. You never see another cutscene. You hear a lot of quotes and narrated stories. But nothing beats these kind of visuals. It’s too bad that Firaxis didn’t include more moments like this one.

Your choices are too bewildering

In past Civilization games, it was easy to figure out your progress or lack of it. You could quickly suss out that your military was behind the times if your army was riding horses and the other one had battle tanks. In this sci-fi game, history doesn’t help you. You have a lot to learn about the relative power of military forces, the value of different buildings you can create in your cities, and decipher all of the various icons on the map and how they can be strategically important to you. I found that I had to do a lot of trial and error, saving often and returning to an earlier saved game if I went down the wrong path out of ignorance.

The economy is hard to figure out

Your economy’s progress rests on collecting resources such as science points, culture points, and energy. The latter really determines what you can build. I became aware of the risks of running out of energy resources early when my cities starting running an energy deficit. This happened after I took over General Kozlov’s city and didn’t realize just how big an energy hog it had become. Once I started running too high a deficit, Beyond Earth randomly disbanded some of my military units, taking a bigger toll on my army than Kozlov ever did. I paid close attention to building energy-related improvements, but the amount of energy generated by trade and my cities would fluctuate wildly, especially as trade agreements came to temporary ends. I had to pay so much attention to the energy resources that I couldn’t build a lot of improvements that I wanted, because they cost a lot in terms of energy maintenance fees. I felt that there should have been an energy adviser that was actually better than the one that suggested what to build next.

On top of that, some things made no sense. The roads can connect your cities and make trade easier. But they aren’t worth building extensively because each hexagon with a road costs an energy point. That’s expensive, and so I decided the roads just weren’t worth it. The “magrail” trains cost even more to maintain. The maintenance costs were a drag that slowed down how fast you could build things and how fast you could expand. It made it a lot more dull. 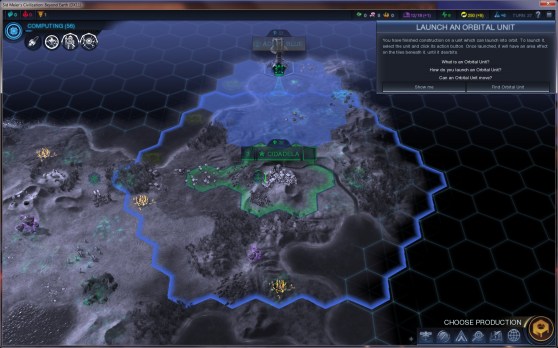 Above: Ecology gives you the chance to throw a miasma repeller into low orbit, clearing out the deadly gas for 10 turns in the tiles underneath it.

The planet’s dangers are predictable

I was disappointed that in my wanderings across the planet, I only encountered two of the giant alien worms that are like the sandworms of Dune. These worms jump out of the ground and slam their tentacles on your military units, crushing them into dust. The threats of the planet are numerous. You can run into giant squid-like Kraken in the seas or encounter nasty creatures in the jungles. But once I finally took down the worms, they never reappeared on my own continent. In short, while the aliens can be a big threat, once you learn how to deal with them, they become a minor nuisance in the game. I kept destroying a lot of nests and wolf beetles, but the big alien threats never came back. The planet’s dangers could have been the most difficult to deal with, but I found the other humans to be more trouble.

The military units are occasionally mismatched

I was delighted to be able to build tactical aircraft midway into the game. But when I attacked a Battlesuit soldier unit, he shot my two aircraft out of the sky. Then I attacked a city, figuring air power would be even more effective than naval bombardment or artillery. Wrong. My tactical air unit did very little damage, and it was easily shot down again. The cities are also quite powerful and hard to take over, because of their strong artillery. In a long war, I was happy to just beat my rival and take over one city.

Spies are too powerful

After I researched Computing and built the Spy Agency, I recruited three spies. These 007 agents could set up networks in foreign or domestic cities and then perform dastardly missions like stealing energy or science points. The problem with the energy theft was that a single spy could make off with 1,000 energy points or more. That’s a huge amount of money, enough to keep your economy afloat for many turns. It’s an outsized reward worthy of superspy. But I could get this kind of result about once every 20 turns. I think that this is a bug that should be rebalanced. That said, the spy part of the game is an interesting dimension, as you can use it to carry out war by other means. 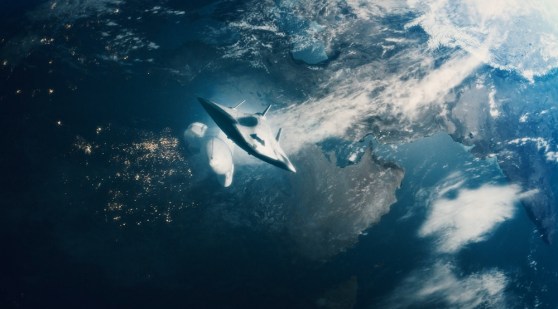 Above: Sid Meier’s Civilization: Beyond Earth.

Sid Meier should be proud to have his name on Civilization: Beyond Earth. It’s got its problems. But it’s a game that will have you staying up late at night, itching to complete just one more turn.

Sid Meier’s Civilization: Beyond Earth is now out for Steam and the Windows PC. The Mac and Linux versions will come later. 2K Games provided GamesBeat with a digital-download code of the Steam version of the game for the purposes of this review.