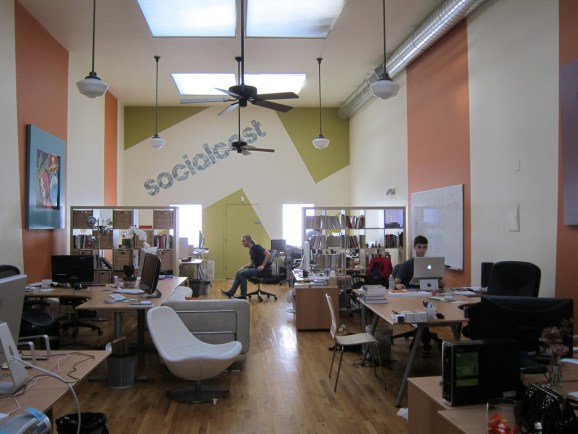 The Socialcast office in San Francisco in 2010.

VMware appears to be searching for a viable strategy for its Socialcast social-networking software, and key people on the team have left, VentureBeat has learned.

Known primarily as a vendor of software for big companies that run their own data centers, VMware bought its way into the “enterprise social network” market in 2011 by acquiring San Francisco-based Socialcast for an undisclosed sum. But over the summer, VMware began to rejigger several aspects of the business, moving Socialcast into the Workspace software portfolio in its growing End-User Computing (EUC) division. EUC marketers and salespeople, meanwhile, started handling Socialcast instead of leaving it as a standalone application. Since the shakeup, a handful of Socialcast employees have left VMware, including vice president of marketing Joan Bodensteiner and one-time chief data scientist Cameran Hetrick.

Socialcast provides a Facebook-like service for seeing what people are up to, with direct messaging and content-sharing capabilities. The VMware acquisition followed Salesforce.com’s introduction of a similar service, Chatter, and Jive Software’s initial public offering. In 2012 Microsoft bought Socialcast lookalike Yammer.

At VMware, though, the Socialcast service doesn’t seem to be a runaway hit. VMware hasn’t made many announcements about new, big-name Socialcast customers, while collaboration applications like Asana and Slack have captured broader attention.

The employee exodus follows the departure of Tim Young, Socialcast’s founder and former chief executive in May, exactly three years after selling to VMware. Others remaining on the team fear they will be replaced and are looking for jobs elsewhere, a source familiar with the matter told VentureBeat.

Since the reorganization, which happened in July or August, the team has been more focused on embedding its elements into other applications, like Salesforce.com, Microsoft SharePoint, and Atlassian’s JIRA, Jens Koerner, Socialcast’s director of product marketing, told VentureBeat in an interview. And at a recent company conference, VMware demonstrated an integration of Socialcast in its own vRealize cloud-management software.

“A more social infrastructure notion is one of the big topics that we’re starting to drive,” Koerner said.

Meanwhile, the team has also been making more of an effort to show the value of its enterprise-level social networking for industries like health care and education, he said. And it’s been announcing new features on its blog each month.

Koerner acknowledged the departures but emphasized that “there’s no landslide [of] people fleeing the company or anything. It’s a couple of folks here and there.” With Socialcast now under Workspace, “it’s easier to move people back and forth,” said Koerner. And the company is looking to hire more, he added.

But VMware has not been quick to fill the positions of people who have left, VentureBeat’s source said.

Even though VMware claims more than 40,000 organizations use Socialcast, revenue for the standalone product hasn’t historically been huge relative to other VMware services, said a different source familiar with the matter. If that’s true, it’s sensible that VMware has made moves recently to change its approach.

“Having [EUC salespeople] push it into some of their deals obviously helps us,” Koerner said. “It’s very hard getting seven-figure deals, for example.”

At least in his opinion, things are looking up, with a clear strategy ahead.

“We’ve turned Socialcast around with it now part of the Workspace service within EUC,” he said.