Apple’s new iPad Air 2 is a pretty device with some nice feature upgrades from the first Air, but it doesn’t offer the kind of radical improvements or wholly new features that would make circa-2013 iPad Air owners yearn to upgrade.

The new Air 2 is billed as a thinner and more power-efficient upgrade to the first iPad Air, with some improved component parts. It also launches right in time with Apple Pay, so it adds the TouchID fingerprint reader for logging into the device and authorizing credit card payments.

The new Air is really thin at 6.1 millimeters (the original iPad Air is 7.55 millimeters thick). But to me the thinness didn’t make the iPad any easier to handle and carry than the first Air. It is, after all, still a large device, with the same 9.7-inch display as its predecessor.

The addition of the TouchID is nice. It’s a handy way of unlocking the device, and it will become more useful as the number of apps and sites honoring Apple Pay increases. 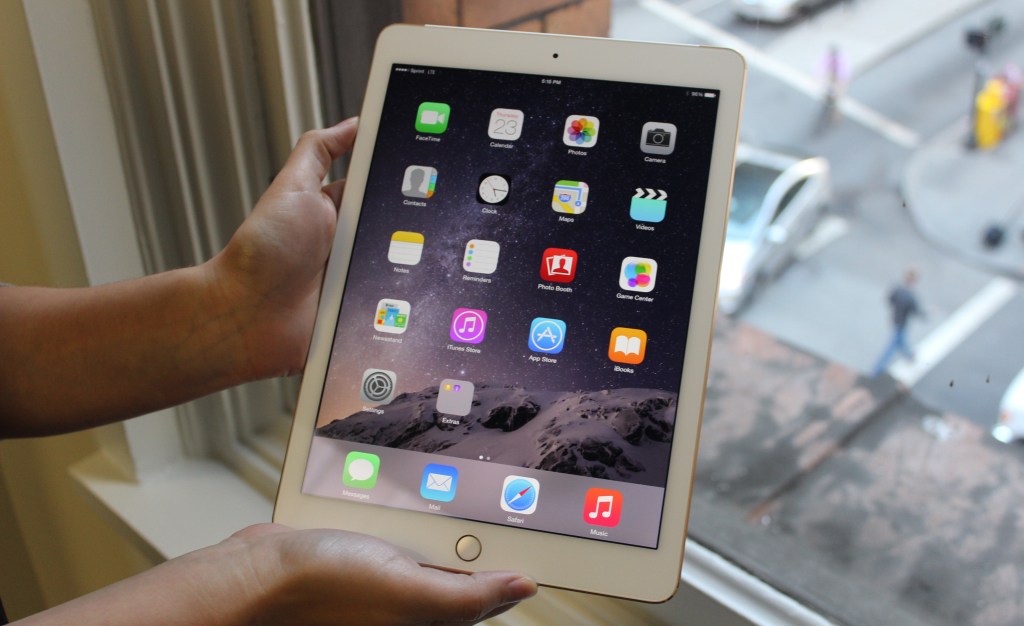 Above: The iPad Air 2 has a reengineered 9.7-inch touchscreen.

Apple made several improvements to the screen with the iPad Air 2. First, the normal three-layer design of the touchscreen — which usually includes the LCD light base, the touch sensor layer, and a glass layer on top — have been collapsed into one layer. The result: On the Air 2, the tip of your finger seems closer to the icon when you select something, and the general responsiveness of the touchscreen is slightly improved.

That pane of glass, which is made by a third-party company, covers the entire front of the Air 2, and the metal housing bends up to meet it on the edges. It truly is a sharp design — simple and harmonious.

As seen in iFixit’s teardown of the device, Apple’s designers moved some of the innards around to accomplish the thin profile of the device. The Air also uses a smaller batter to achieve that thinness, relying on iOS 8 to use the components in the device in a more power-efficient way.

The Air 2 sports a faster CPU in the A8X. The A8X works in concert with the Apple M8 motion co-processor to produce better-looking graphics with less power consumption.

Developers will be happy too, because the two chips work together with the operating system different way now, which will enable more powerful graphics possibilities for apps and games. For instance, there seems to be more horsepower available to the image processing app Pixelmator; that is, the app is more responsive and can execute more intense image editing functions.

How? The abstraction layer between the operating system and the graphics chip is reduced so that the developer, in essence, has greater access to, and control over, the graphics chip. A gaming app that could render only one moving figure on the screen at a time might now be able to exploit enough graphics power to display five of them. 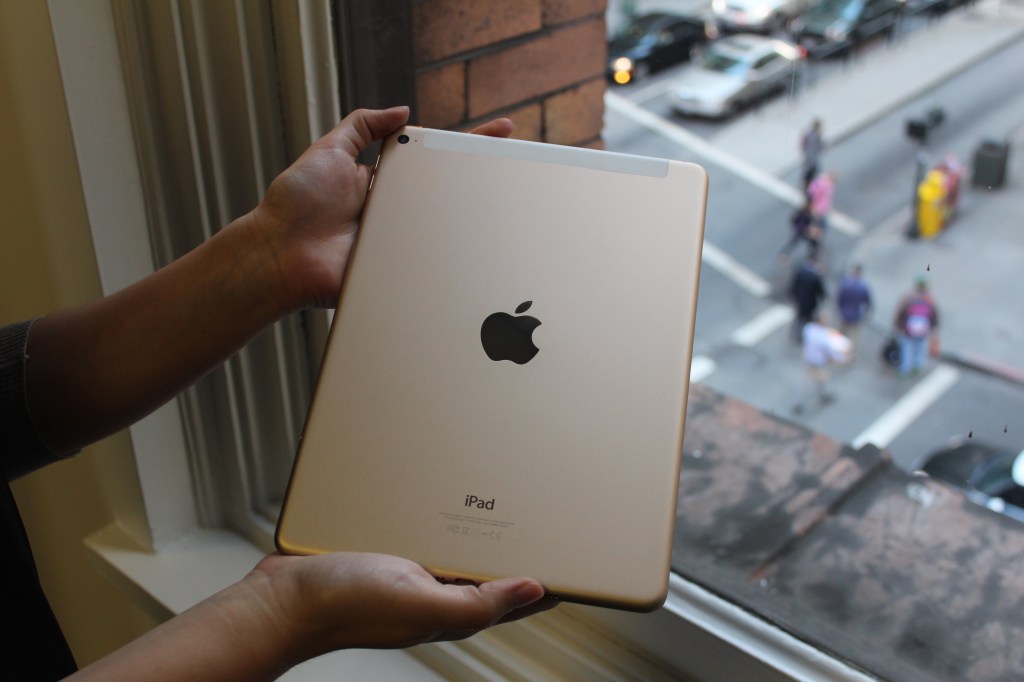 Above: The Air 2 is lighter than the Air, at XX

In my tests, I found the slow motion feature to be the most compelling showcase for the new camera. The software glues them together in a very smooth flow. I had a co-worker stand up and do a moderately fast helicopter spin, and the result — with the gradual movement of clothes and hair away from the body — was impressive, even beautiful in a way.

Using the panorama feature I moved the camera from one side of the room (the “bright side” where the windows are) to the dark side, where there’s only the overhead office light. The definition of the picture was reasonably sharp, but it was the steady transition from light to dark in the same shot that was most impressive.

The stills I shot were reasonable sharp, and I saw no issues with white balance.

Above: The light balance in the panorama shot taken by the iPad Air 2 camera was impressive.

When you set up your iPad it asks you to place you finger or thumb down on the TouchID sensor numerous times and from numerous angles, so that it always recognizes your touch regardless of how you’re holding the device.

The fingerprint reader is used to authenticate the user at the login screen so that it isn’t necessary to type in a security pin. Apple is talking a lot these days about the uses for the iPad in the enterprise (think hospitals, construction sites, corporations, etc.), and device security is a key focus in those environments. If for no other reason, work-issued devices like tablets and phones get stolen a lot. 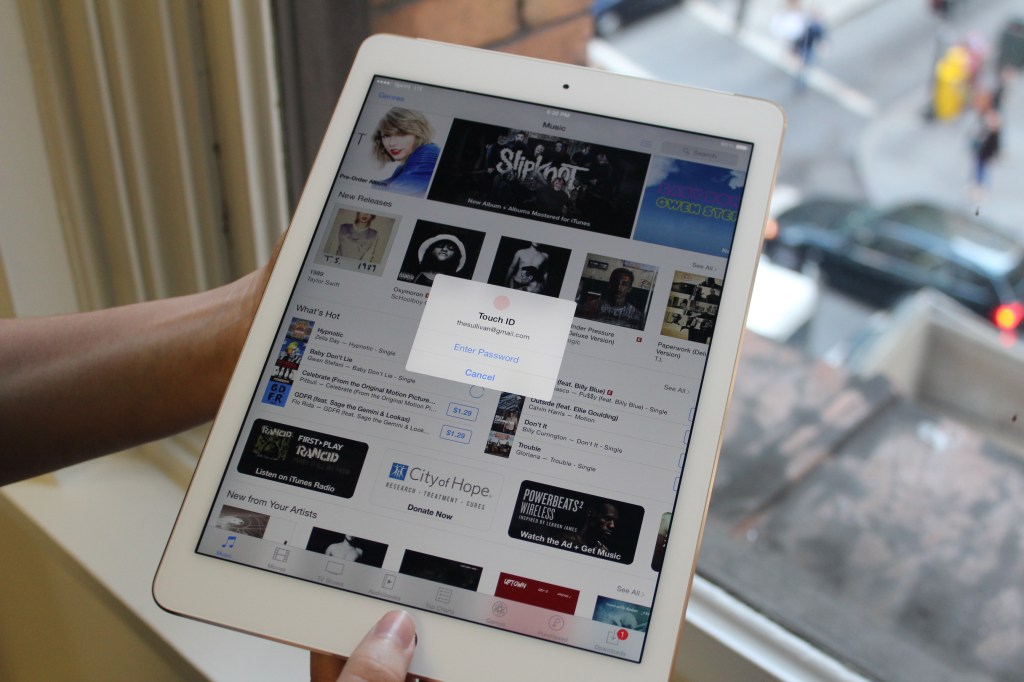 I had an easy time setting up Apple Pay on the Air 2, but I had a harder time actually paying with it.

After entering Settings and choosing the “Passbook and Apple Pay” tab, I was ready to enter a couple of my credit cards into the system. For both my Amex and Chase Visa cards, I had only to enter my name, then take a picture of the card with the iPad’s camera.

The system immediately read the card number and expiration date from the cards. The information is read from the cards, turned into a unique code to be stored in the iPad, then transmitted securely to the issuing banks. Apple does not keep the photos of cards, it says.

Then it was time to try to buy something using Apple Pay. Note that the Air 2 contains no NFC chip, so you can’t use it to pay for items in a brick and mortar store. Instead it’s meant for in-app purchases.

The first thing I did was try to make a purchase at the the Store at Apple.com, but Apple Pay is not supported there. Then I went to Apple’s App Store app, where I thought surely I would be able to make an Apple Pay purchase. But that didn’t work either — on Thursday. The Apple Pay option didn’t display when I tried to check out. However, the option did show up when I tried it Friday, which made me think that my bank needed just a little time to get things set up.

The Wi-Fi and cellular antennas, Apple says, both received upgrades in the Air 2. The speakers at the bottom of the device also seem to have had an upgrade from the earlier Air, as they sound markedly less tiny and more dynamic.

The Air 2 comes with an “Apple SIM” inside, which can be connected to either AT&T, T-Mobile, or Sprint service. No longer do you need to order a SIM card from your carrier and hope it’s the right size to fit in the little slot. And, Apple says, it wants to make it easier on users who aren’t under contract and want to switch carriers.

Above: On the top of the iPad Air 2 you’ll find the power button and the headphone jack.

If you had asked me to guess how Apple would upgrade iPad, I would have guessed it would look a lot like the iPad Air 2 looks. The upgrade path makes perfect sense. It’s not hard to predict that Apple Pay would be supported with TouchID and that the display and the chip would be improved. It’s not surprising that the new device would contain as many of the component upgrades in the new iPhone 6 as possible. And, of course, thinner is always better.

If, however, I already owned an iPad Air, I doubt that the iPad Air 2 would cause me to pull out the plastic — or fire up my Apple Pay.