Get ready for tiny cars filled with vintage clothing and irony.

As if Brooklyn couldn’t be any more twee, now it’s home to the first deployment of on-demand Smart cars from Car2Go in the New York City area. The company is officially launching its service tomorrow in Brooklyn with 400 two-seater Smart cars at the ready.

A subsidiary of Daimler (which also makes the Smart cars), Car2Go lets you rent its small cars by the minute and drop them off anywhere in a city’s “home area.” In Brooklyn, that area stretches along the west side of the borough, from Greenpoint and Williasmburg down to Coney Island. Car2Go charges a one-time $35 signup fee (there’s no annual membership fee like Zipcar) and $0.41 a minute. (You can also check out a car for $15 an hour or $85 a day.) 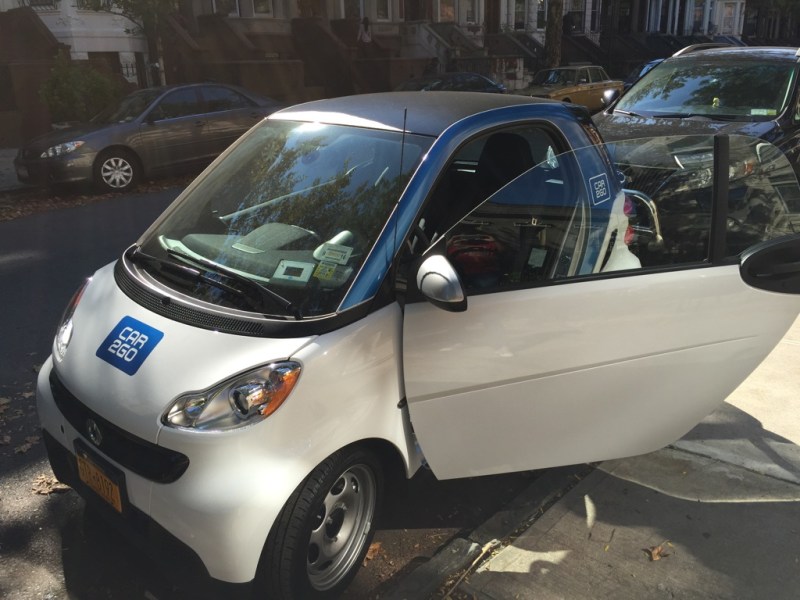 Car2Go is mainly targeted at people looking for spontaneous short trips. You can think of it like a more flexible Zipcar — since Car2Go typically deploys hundreds of vehicles in every location, there’s a good chance you’ll be able to grab a car quickly at the last minute. In Brooklyn, it’s practically a miracle to find a Zipcar that isn’t reserved during the weekend.

Members user the Car2Go app to find a nearby vehicle, which they unlock with a wave of their membership card. The company is also working on letting you unlock its Smart cars entirely with your phone, according to Adrianne Andang, Car2Go’s North American communications head.

Each Smart Fortwo model, not surprisingly, includes seats for you and one passenger. There’s also a small amount of trunk space available. You’re not going to be doing a single Ikea run to refurnish your home with these cars, but their miniscule trunk space could still be useful for carting small things around. The cars are also customized specifically for Car2Go — the dashboard display tells you how efficiently you’re driving, and there’s also a button that connects you directly to roadside assistance. 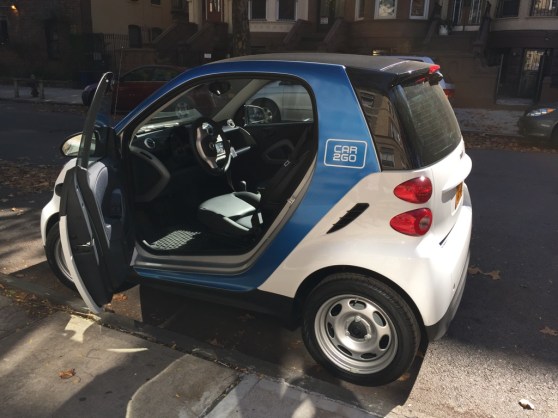 Stepping into the Car2Go vehicle was my first-ever encounter with a Smart car, and I was surprised to find that it actually felt pretty comfortable, even for my 5-foot 8-inch frame. Driving the car took some getting used to, though. While bopping around Crown Heights, the Smart car felt more like a souped up golf cart than a worthy member of the road (and New York drivers aren’t exactly patient).

Still, it’s easy to see how Car2Go’s Smart cars are ideal for urban living. Their tiny size allows them to fit into all sorts of parking spaces easily (parallel parking, in particular, is a dream). At around 40 miles per gallon, they’re fuel efficient (there aren’t any electric cars in Brooklyn, yet). And they give you the convenience of having a car on-hand when you need it without actually owning a car. It’s just a shame that they’re still not allowed in San Francisco.

It’s not the first innovative car sharing service in NY — RelayRides gave it a go last year, but was forced to shut down operations in NYC — but Car2Go has a shot at being the first truly successful one. 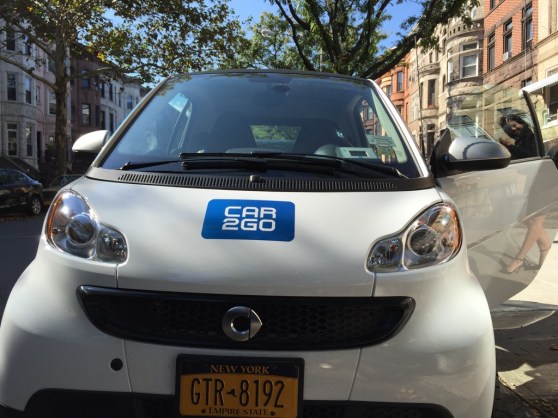 When it comes to parking, Car2Go has finagled some deals with other markets, but its cars aren’t getting any special treatment in Brooklyn. You’ll still have to feed the meter (or more commonly now, the digital ticketing machine) in some locations. You’ll also have to make sure to avoid parking on streets that are scheduled to be cleaned the next day. (Car2Go’s fleet of employees will be moving the cars manually to avoid street cleaning fines.)

Brooklyn makes for Car2Go’s 29th global market and its 15th in the United States. Car2Go members can also use the service across other locations in the U.S., including Austin (its home base), Portland, and San Diego.