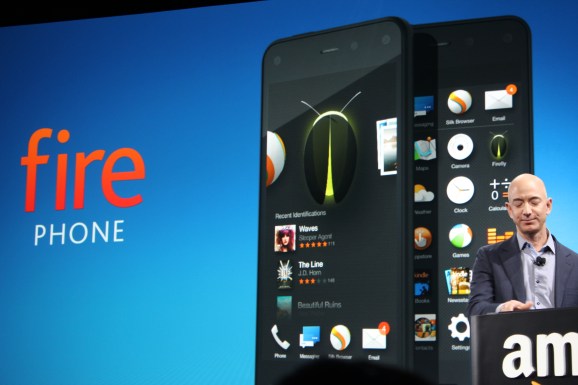 Amazon's new phone will, of course, have games.

Back when Jeff Bezos was first unveiling Amazon’s Fire Phone in June, he may have been preparing the world for the disaster that lay ahead. At the start of his presentation, calling on his inner philosopher, Bezos explained:

“You can fill a bucket with an eyedropper, if the bucket doesn’t leak.”

Well, Grasshopper is perhaps now learning that the bucket can also be filled with his employees’ tears. Or maybe the lesson is that the bucket is leaking and needs duct tape? Or that you need a bigger eyedropper? Sorry, it’s still hard to understand the metaphor.

In any case, years of work on an Amazon smartphone led to the painful revelation yesterday that the company is taking a $170 million write-off because of unexpectedly low sales.

This, of course, calls to mind another recent hardware launch that flopped: Microsoft’s Surface.

Now, if Amazon wants to take some comfort, it can look at Microsoft’s latest earnings, also announced yesterday, and see that the company reported revenue of $908 million from the Surface in Q1 2015, more than double from the same quarter a year ago.

Congratulations, Microsoft. It looks like the Surface is finally pulling down more quarterly revenue than Apple’s iPod. (In the June quarter, Apple reported $442 million in iPod revenue; the Surface was at $409 million.)

So, how does the Fire Phone’s start compare to the launch of the Surface?

Let’s consider some similarities. We’ll ignore the fact that both were made by companies from the Seattle area, because that would be unfair to the good people of Seattle.

Both gadgets were made by companies not known for hardware, though Microsoft did have almost a decade of building the Xbox behind it. It also had the Zune.

By technology standards, both gadgets were horrifically, horrendously late to whatever markets their makers believed they were targeting. And both companies indulged their fantasy that, like Apple, they could charge premium prices for their hardware. Yet the Fire Phone and the Surface were criticized at the start for being too pricey.

Geez, it’s almost like the Fire Phone and Surface could be kissing cousins.

But what about the bottom line?

The Surface went on sale in October 2012. In July 2013, Microsoft announced to the shock of no one that sales had been lackluster. The company said it was taking a $900 million charge for unsold Surface tablets.

Microsoft took that charge in the June quarter, which was the end of its 2013 fiscal year. So really, that probably accounts for non-sales going back the previous eight months.

Still, if you average that at a bit more than $100 million of non-sales per month, the Surface comes out ahead of the Fire Phone’s non-sales in its first quarter.

So, there. The Fire Phone does have something to brag about: We’re not as bad as the Surface!

Sounds like a great slogan for a t-shirt to us.