Try as they might, music services have yet to come up with a universally preferred method for artists to track listener data about their work.

Spotify started offering its version of music analytics for artists last year. Apple inherited musician analytics through the Beats Music acquisition of Topspin. And, finally, “YouTube of audio” service SoundCloud rolled out its own analytics tools along with a new ad platform back in August. All of these analytics tools were marketed as providing musicians with better information they can use to earn more money. Now it’s Pandora’s turn.

The company may have arguably been first in the rise of digital radio services, but it was among the last of the big players to start tracking artist data with the launch of Pandora AMP earlier this week. But just because it is late to the analytics party doesn’t mean it wasn’t planning for it.

Pandora cofounder Tim Westergren told VentureBeat in a phone interview that the company has been working on AMP for “literally years.”

“There is nothing more central to why Pandora exists than what AMP is really tackling,” Westergren said, adding that there’s good reason the company didn’t launch something like AMP sooner. “I’ve been grinding my teeth for a long, long time now, anxiously awaiting launching it. But we wanted to make sure that it didn’t disappoint.

“I think there have been a lot of promises made to musicians over the years, and this is one that has to be fulfilled,” he explained in regards to services touted as a solution for “working” (aka relatively unknown) artists looking to make enough money to justify music as a real source of income.

“Ultimately, we would very much like it if the first thing musicians did when they woke up in the morning was to log into Pandora and have a look at AMP.” 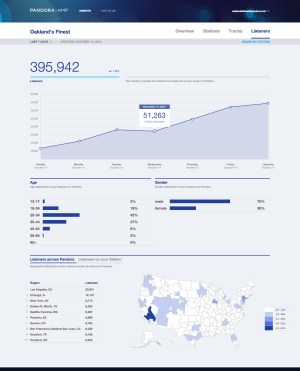 See, Westergren gets it. At least I think he does. Music services are all starting to provide audience analytics because creating relationships with musicians is valuable. It’s akin to Facebook’s hold on the average U.S. citizen. When your music platform becomes the tool that guides tour decisions, creates perfect set lists for concerts, shows which fans are enjoying what songs, and makes musicians more money, then your platform wins.

If Pandora’s AMP becomes essential enough to the very creators whose work sustains all streaming services, it can change how music is measured, how artists are paid, and maybe even how musicians promote new music — in the same way news publications can pay to promote a link on Facebook, for example.

I’ve seen how addictive audience-tracking tools can be from a content creator’s perspective. At any given moment, you can track how far your content — your art — reaches its audience outside your news organization. You can see how long people spend consuming it and view various other behavioral and social metrics. I once gave a battle-hardened veteran of the newspaper business a glimpse of real-time audience tracking tool Chartbeat, and he was blown away. The truth is, it’s exciting to see who is checking out something you created and watching hard data showing incremental progress on the path to becoming a well-respected creator among strangers.

Right now, musicians don’t really have something like that. Sure, there are plenty of services offering tools like it, but musicians haven’t yet collectively become aware. I say this having grown up in “Music City” — Nashville, Tennessee — where a lot of my friends and acquaintances were either aspiring musicians or liked to think of themselves as such. Those people — musicians — are inspired by the music, not data, so they measure incremental success in different, more traditional ways, like the crowd reaction at a live show.

“This [AMP], I believe, will help artists understand the scope of our platform and what’s possible given its size. I don’t think people realize how large or connected Pandora is. This will connect some of the dots,” Westergren told me. The music service has over 75 million active users per month that listened to nearly 5 billion hours of music in its third quarter alone. Westergren said that the listener data provided through AMP will make the service as indispensable to artists as it is already for users now personalizing their experience and connecting with music in a way that wasn’t possible on terrestrial radio.

“It’ll be equally important to artists because [Pandora will] now become a new form of communication with listeners that’s never existed before,” Westergren said. This is an aspect of Pandora that no one has fully understood up until now, which he hopes AMP will eventually change.

The AMP platform provides analytics to over 125,000 artists with music in Pandora’s vast library of songs. About 12,000 of those artists have more than 100,000 unique listeners and, with AMP, can now get a clearer understanding of their relative successes. One thing Westergren was quick to point out is that the “unique listener” stat the company uses to show traction is the number of Pandora users who either actively added or created stations for a particular artist or thumbed-up a song from that artist, not the number of people who passively listened to a song from a particular artist.

So the larger question is, how is Pandora’s AMP going to stand out among other listener analytics tools? 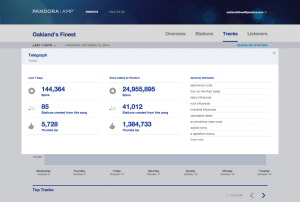 Above: Screenshot of artist analytics from Pandora AMP

Well, at first glance it doesn’t seem like AMP is much different, and it might not be in terms of appearance. What is different — and a main point that Pandora is trying to drive home — is that the company’s music platform has almost 10 years’ worth of listener data powering song recommendations and how people uniquely want to experience music. And that listener data has been carefully applied to Pandora’s audience measurement data, which the company smartly tied to the same standard measurements the billion-dollar terrestrial radio ad industry uses.

That said, the music business community trusts Pandora’s listener measurements, so in theory they should be superior in showing what music fans like/dislike — at least when compared to listener measurements offered by rival music services. It remains to be seen if this will actually prove true for Pandora’s AMP platform.

Also, Pandora’s AMP might not translate directly to artists making more money from Pandora (in fact, Pandora’s having a hard time making money itself, as Thursday’s Q3 2014 earnings report shows), but that’s really not something new or specific to Pandora. (See also, Spotify.) Even moderately successful album sales a decade ago didn’t bring in huge paydays for artists. But if artists can use this tool to enhance other areas of their career that do generate significant amounts of money — such as live shows and merchandise sales — then AMP is still very valuable.

“For working artists, the ability to tour and market themselves effectively is sort of the whole ballgame. I mean, you really need to figure that out,” Westergren said. “So if you’re going to do 12 stops on a two-week tour, AMP can help you do them in just the right spots. And, of course, it’s also going to help artists recognize which of their songs people are connecting to.”

Still, AMP’s launch, Westergren told me, is only laying the initial groundwork for much larger plans Pandora has for the future, which he declined to elaborate on.

“What we’re putting out today with AMP is sort of the basic building block for everything that comes next,” he said. “We’ve got a laundry list of ideas.”