Next Tuesday, publisher Activision launches a new Call of Duty game for the 12th year in a row. Call of Duty: Advanced Warfare will likely make the company a lot of money, but one analyst thinks it might not generate as much as previous entries in the series.

Call of Duty: Advanced Warfare’s preorder numbers are still down compared to the last two releases, according to Cowen and Company analyst Doug Creutz. Advanced Warfare is tracking 40 percent behind 2013’s Ghosts and 70 percent behind 2012’s Black Ops II. These numbers are better than in recent weeks, which is likely due to Activision spinning up the marketing for the futuristic military shooter.

“We continue to believe CoD will be down meaningfully versus last year,” Creutz wrote in a note to investors. “With the franchise facing two consecutive significant year-over-year declines in sales, we think it is prudent to assume it has peaked.”

Last year’s Call of Duty: Ghosts was down around 25 percent from Black Ops II. Activision contributed much of that to the console transition, but Creutz isn’t buying that.

“Last year’s Call of Duty being down 25 percent year-over-year was a huge outlier among all those franchise performances,” wrote Creutz.

The analyst expects Call of Duty to take a similar dip this year. Yet Call of Duty could still end the year as the console industry’s best-selling game.

“We now think that it is less likely that Destiny will outsell Call of Duty: Advanced Warfare,” wrote Creutz. “But if Destiny enjoys stronger legs and reaches 15 million [copies sold], we believe it could still happen due in part to our concerns about Call of Duty.”

Finally, Ghosts’ sales were likely down due to middling reviews and a disappointing multiplayer mode. This year, many fans and critics are expecting Advanced Warfare to rebound — but this might not make enough of a difference.

“We tend to agree that this year’s title will likely be better than last year’s, if for no other reason than that the bar is low,” wrote Creutz. “However, we worry that the damage has already been done. We have seen with other franchises that, once you disappoint your audience with a poor-quality product, they often do not return, even if quality subsequently recovers.” 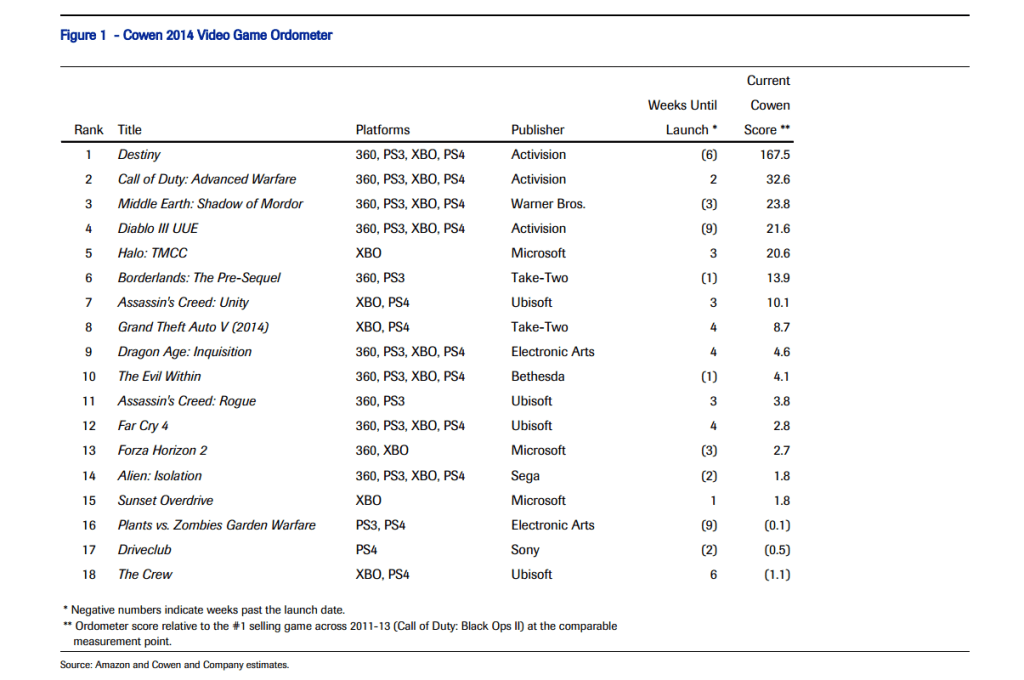 To get these numbers, Creutz uses a proprietary tool that measures the performance of games on Amazon’s top-selling chart. The Cowen analyst has spent the last six years gathering data from the Amazon list and comparing it to sales data from industry-tracking firm The NPD Group. Last year, Creutz introduced its preorder and sales-prediction tool that he calls the “Ordometer,” which has had a pretty good record of predicting sales. The Ordometer doesn’t consider digital sales, but this doesn’t matter since nearly every triple-A release has a similar split between physical and digital.