When it comes to mobile graphics, ARM wants to cover all the bases. The Cambridge, England-based chip design company is announcing three new graphics processing unit (GPU) chip designs based on its Mali mobile graphics architecture.

ARM is coming up with multiple Mali GPUs because mobile is becoming a much more segmented market. The company’s Cortex microprocessors and Mali GPUs cover the gamut from feature phones to premium smartphones. The categories in the mainstream market include entry-level smartphones, mid-range tablets, mid-range smartphones, and premium tablets.

“We have products from the very low end to the high end,” Steve Steele, senior product manager of media processing, told VentureBeat.

The new GPUs will balance the need for higher performance, higher energy efficiency, cost efficiency, and faster time-to-market, he said. The new GPUs include the high-end Mali-T860 GPU, the Mali-T830 GPU, and the Mali-T820 GPU. ARM is also introducing the Mali-V550 video processor and the Mali-DP550 display processor chip, which a coprocessor interface and support for 7 layer composition. The Mali-T860 is 45 percent more energy efficient across a wide range of content. It can support 4K graphics and beyond. Each processor is tuned to a different mobile submarket.

“They each have the right amount of bandwidth, as bandwidth is a very precious resource on a chip,” Steele said.

ARM designs intellectual property that it licenses to other chip makers. Those chip makers take those designs and add their own modifcations to them, and then they manufacture them. It has more than 100 licenses for its Mali GPU designs with 60 partners. It says that Mali is the No. 1 GPU in digital TVs, and more than 400 million Mali GPUs shipped in 2013.

Demand is picking up for mobile graphics. About 90 percent of revenue for mobile apps comes from games, according to market researcher App Annie. About 53 percent of mobile data was video in 2013, according to Cisco. About 73 percent of all mobile device resolutions are high-definition or more, according to the Android Developer Dashboards, and mobile video compound annual growth rate was 69 percent from 2013 to 2018. 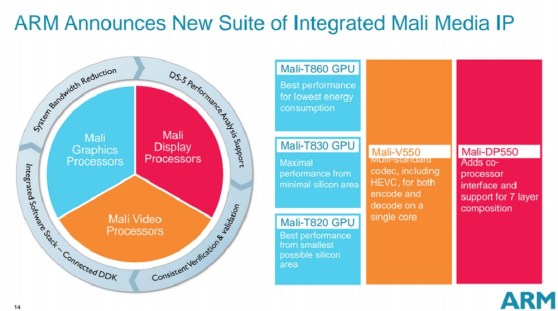