Facebook today announced an update to its Android and iOS apps that focuses on photos. You can download the new version now directly from Google Play and Apple’s App Store.

When uploading photos, you can now choose the order in which they will appear. Once you pick the ones you want (notice the numbering system in the left screenshot below), you’ll also get a preview of how the story will appear in your friends’ News Feed. 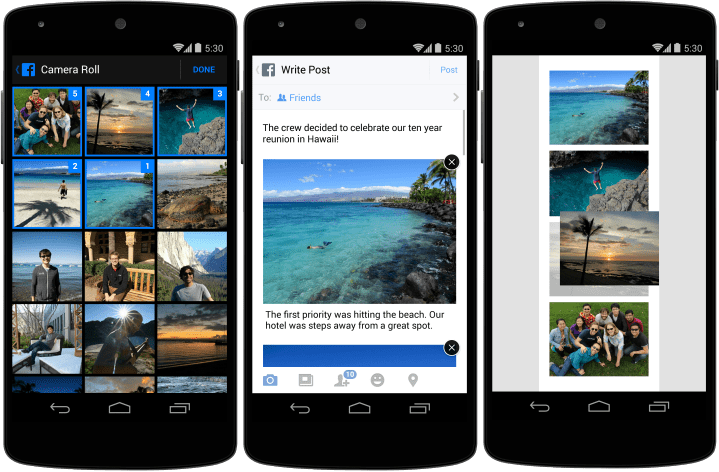 You can add an introduction to the preview as well as caption individual photos. Even at this point, you can reorder photos: Just touch one and drag it to a different spot.

The whole point of adding the ability to reorder photos is linked to Facebook’s new collage layout. Here is how it looks: 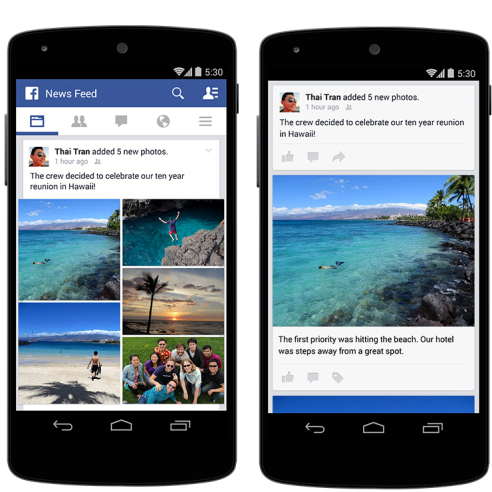 The uploader and all their friends will see photos in this new story form. Tapping a photo lets you scroll through the photos in the order they were chosen to be seen.

Photos have been a huge part of Facebook, ever since the feature first became available in October 2005. Over a year ago in September 2013, the company shared it was seeing 350 million new photos being uploaded daily, and 250 billion photos had been uploaded to date.

While those figures haven’t been updated since then, they’re still massive even one year later. While some estimates show Snapchat edges Facebook in photos sent per day, those images aren’t stored for long periods of time.

As such, Facebook is still the king of online photo storage, and right now it doesn’t appear to have a serious competitor. Nevertheless, that’s no reason for the company to stop delivering new features related to photos, which is exactly why today’s update isn’t much of a surprise.