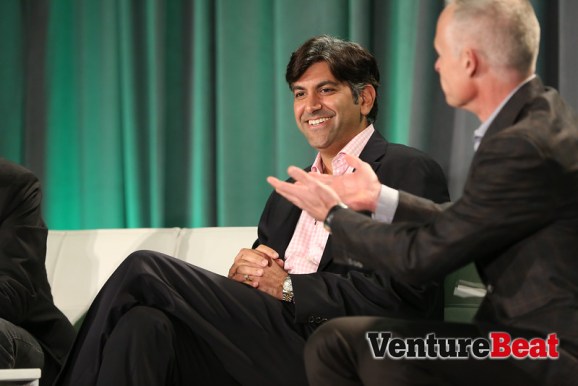 SAN FRANCISCO — Former White House CTO Aneesh Chopra says the government is getting its game on when it comes to persuading provider groups to share clinical data with patients.

The Affordable Care Act mandates that patients have a right to their own health data, but the government has largely gone easy on enforcing this rule — until recently. The Office of Civil Rights under the Department of Health and Human Services, the office charged with requiring providers to share data, is now levying fines for providers that do not have a mechanism for patient data-sharing set up.

“The HHS is issuing fines of $20,000 a day on average if they don’t give patients their data,” Chopra said.

Chopra spoke today at VentureBeat’s HealthBeat conference about the progress the government is making toward making health data more available to patients. The government wants health providers to use a “Public API” to share a patient’s health data with them — and avoid the fines.

Many in digital health circles believe that the system might work better if consumers controlled access to their own health data. Providers typically must set up a patient portal where users can log in and access at least a subset of the patient record. The initiative is known as “Blue Button,” which signifies the button on many health provider sites leading to personal health data portal.

The OCR doesn’t have nearly enough staff to enforce the Blue Button initiative part of the health care law nationwide. But it can take the approach it does with the HIPAA privacy law, which is by making an example of a few errant providers and in doing so encouraging other providers to comply.

Chopra admits there’s still work to be done. “We’re at the two-yard line,” he told the crowd. The government’s goal, of course, is still 98 yards away.