The Xbox One and PlayStation 4 are still less than a year old, and Insomniac Games recognized this as one of the best opportunities to introduce a new franchise.

Sunset Overdrive is an open-world action shooter that has players doing battle with a soda corporation and the army of energy-drink mutants that it created. Due out as an Xbox One exclusive on Oct. 30, Insomniac’s first game for the new consoles distinguishes itself from other shooters by forcing players to stay off the ground. The floor is lava (literally, at one point). Running around on terra firma is almost always the fastest way to die. Instead, your best chance for survival is to guide your character around the obstacle course-like world by grinding power lines (like you’re on a skateboard), running on walls, gliding through the air, and bouncing on cars. The experience is as chaotic and kinetic as it sounds.

The shorthand I can come up with is this: It’s combat Tony Hawk Pro Skater. 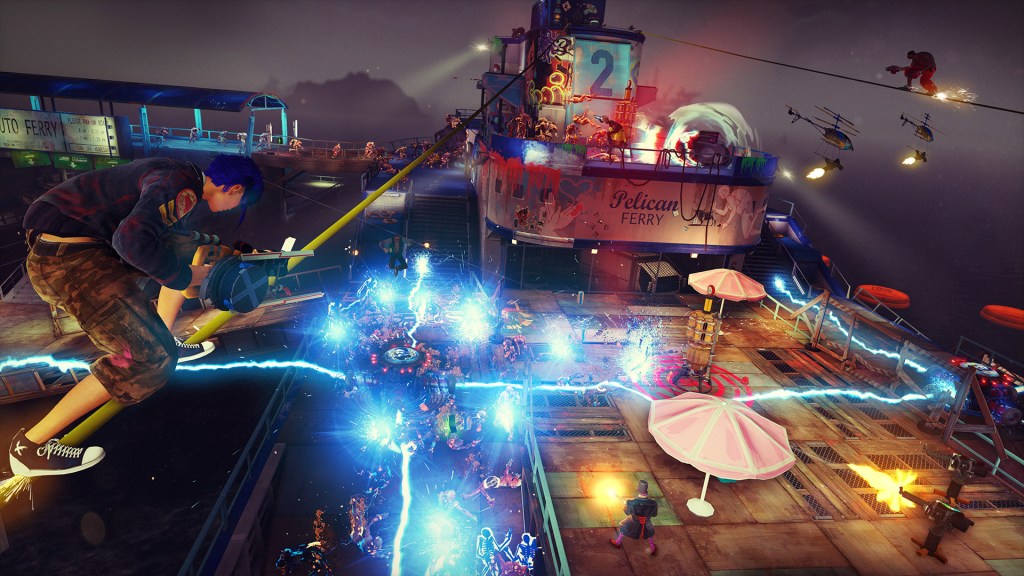 Above: You’ll need to grind above the chaos if you want to survive most encounters.

It’s crazy, and it’s fun enough to support a pretty entertaining campaign that only has a few minor issues.

The traversal mechanics are a blast

Getting around the world of Sunset City really is the big draw here. Running is slow, so even when the area is clear of mutants, you’ll want to use your grinds and wallruns to go from point A to point B.

The good news is that jumping from flag poles to roof tops to cars doesn’t feel automatic. Like Tony Hawk, Sunset Overdrive demands that you use skill to get around, so you always feel in control.

This extends into combat where you’ll absolutely need to use creative locomotion to survive encounters with enemies. To encourage you to stay on the power lines and away from the killzone that is the Sunset city streets, you build up the combo meter over time as long as you keep your movement or combat chain going.

Bigger combos takes your character to a higher overdrive level, which unlocks special abilities called amps. The higher-level amps include benefits like lightning raining down and killing random enemies around you, which is way cooler than it even sounds. You can mix and match amps on your character and weapons. You can also unlock badges that make you even more powerful.

Insomniac decided to pair Sunset Overdrive’s frantic action with a cartoony, hip visual style that is certainly unique when it comes to triple-A games. It’s flashy and colorful, with a “punk rock” aesthetic. But this doesn’t begin and end with the color palette and soundtrack.

When you kill enemies, they explode into a satisfying bubble of orange soda. When you destroy a building, the mushroom cloud blooms into the air into the shape of an onomatopoeia like “BOOM!”

All this makes playing Sunset Overdrive feel like the exact opposite of the drab shooters we’ve come to expect from tentpole releases for consoles.

The style also had me absolutely in love with my character. One of the first things you do when you boot up Sunset Overdrive is create your avatar. What does my character look like? I’m glad you asked. 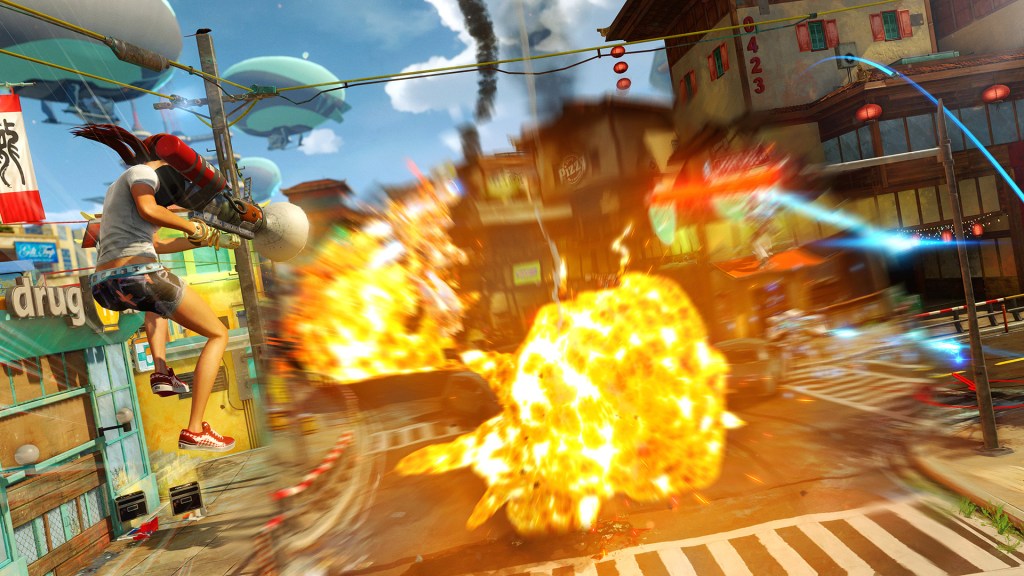 Above: Explosions sure are pretty in this one.

She is a kickass black lady with an Einstein white mop of hair and a mustache. She is also the coolest character in all of video games. I hope she is in the next Smash Bros. 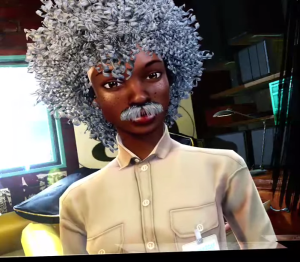 Above: This is my hero, and she’s the coolest!

You can change everything about the way your hero looks, but I got attached to mine. I gave her some new skinny jeans and a vest once or twice, but I’ll always associate Sunset Overdrive with the character I made.

Finally, Insomniac’s punk-rock attitude and irreverent tone extends to the humor as well.

Sunset Overdrive constantly breaks the fourth wall. The tutorial mission is just a booming disembodied voice making fun of tutorial missions. It’s clever and nonstop. I got to a point in the story where I thought, “Oh, great — here’s one of those quests,” and almost immediately after that my character started cracking wise about the mission design. That moment repeated itself over and over throughout my time with Sunset Overdrive.

The humor, the look, and the sound are all of the sugar that really helps the medicine go down.

Open-world quests are kind of a drag

Even with my hip hero keeping me chuckling throughout the story, I did feel burnt out by Sunset Overdrive’s structure.

You get simple quests from groups of people who otherwise aren’t doing anything. During the course of completing those quests, you realize that you actually need to go and complete an entirely different set of missions that take a lot longer than expected.

Yes, Sunset Overdrive is making fun of this while it does it, but for everything that it’s doing that is new, this is one of those things that just feels creaky, gray-haired old.

The mission structure isn’t worse than other open-world games. And the missions do an OK job of introducing you to new ways of using your powers. But I was disappointed. That’s likely due to a combination of the fresh feel and its appearance on a new console.

Mandatory tower-defense mode is not my jam

Most of Sunset Overdrive has you running around its beautiful map. Occasionally, however, you stop and cook up some new power amps with your buddy, Floyd. During these sections, it turns into a third-person tower-defense game. It’s a horde mode that’ll has waves of enemies trying to crash your base while you wait for Floyd to finish making your new stuff. 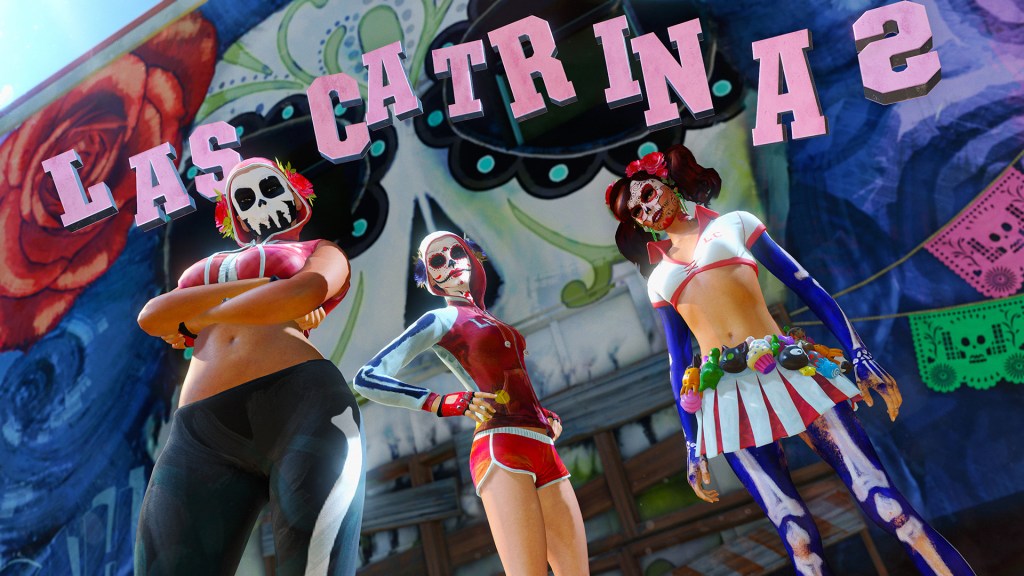 Above: Las Catrinas are pretty badass.

This is no fun in the single-player mode. Multiplayer has something similar, and that works — but it’s just too hectic when you’re alone.

The big problem is that it’s not like you’ve spent hours memorizing the nuances of this one small part of the world. I didn’t even know which way the mutants were coming from a lot of the time. I spent way too long trying to make sense of the minimap, which meant that the enemy invaders easily broke through my defenses and wrecked everything. Maybe players with better skills than I showed will have an easier time with this, but it didn’t work for me — and I suspect it won’t for many of you.

Sunset Overdrive is a really good time. If you also regularly run with an online crew that enjoys a good “us versus waves of baddies” modes, you will likely get even more mileage out of it.

The look, feel, and sound won me over. Forgiving the mission structure and forgetting the tower-defense junk, this is pretty much what I would expect from an action shooter for this console generation.

And it doesn’t hurt that “combat Tony Hawk” is a brilliant idea that someone should’ve thought up long ago.

Microsoft provided GamesBeat with a digital download code for Sunset Overdrive for the purposes of this review. It debuts exclusively on Xbox One on Oct. 30.