XYZprinting announced it has created an all-in-one 3D printer and scanner for sale starting today at $800.

The Da Vinci 1.0 all-in-one 3D printer allows just about anyone to create a 3D-printed object, and that’s one of the requirements for mass adoption of the new technology. By adding a scanner to the 3D printer, XYZprinting has lowered the bar for many people, Simon Shen, chief executive of Taipei-based New Kinpo Group, the parent company of XYZprinting, told VentureBeat in an interview.

3D printing hardware sales have grown at a 32.3 percent compound annual growth rate for the past three years, according to market researcher Wohlers Associates. It is now a $3 billion industry, and it could grow to $21 billion by 2020, Wohlers says. New Kinpo Group is a good company to enter the market as it has been making inkjet and laser printers for 15 years as a contract manufacturer, Shen said.

“We thought that 3D printers would be the rising star for the printing industry, and so we started this work a while ago,” Shen said. “We asked our customers if they were interested, but they felt the market was too small. So we decided we should do it ourselves.” 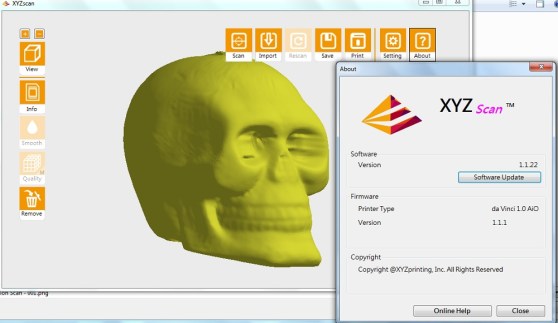 The product is a follow-up to the $500 3D printer that the company launched earlier this year as it tries to bring low-cost 3D printers to the mainstream. It isn’t nearly as cheap as inkjet printing — a technology that New Kinpo Group also specializes in manufacturing — but the prices are starting to come down.

XYZprinting, which has a U.S. office in San Diego, Calif., has tried to make it easy to design your own 3D object through software that runs on a PC. The software lets you preview the scan and edit the object as necessary before printing. You can also scan an object and then modify it or share the design with others.

The new device has built-in high-resolution scanning with an industrial grade scanning resolution of 0.5 millimeters. You can design objects in a matter of minutes and save them in the industry standard .stl format. It has diagonally placed laser sensors that speed up the scanning in conjunction with a turntable to ensure a comprehensive scan. The machine has an algorithm (patent pending) that fills in voids with texture and curves to provide a seamless printed object.

The Da Vinci uses fused filament fabrication technology (FFF) and can print items that have dimensions of 7.8 inches by 7.8 inches by 7.8 inches. I checked out the objects and they are reasonably precise, though the plastic object is someone grainy and rough rather than perfectly smooth. XYZprinting has a cloud-based database of open-source 3D models that consumers can choose to print.

“We are trying to set the most reasonable prices,” Shen said. “If we can get it below $500, it becomes more affordable than an [unsubsidized] mobile phone.”

Shen said the device has a smart filament cartridge system and its nozzles are easy to clean. A speed-scan feature can print an object in just five minutes. For better quality, it could take a few hours.

The machine is available for order on Amazon, and it will go on sale on sites such as NewEgg.com and retailers Micro Center and Studica soon. XYZprinting’s $500 3D printer is a single-color printing device. The interest in that device has been with hobbyists, students, teachers, and designers. The chief rival is Makerbot.

Shen said that 3D printing is gaining traction in markets such as education, design, fashion, medical, and automotive. But Shen said that there are still about 10 different technologies competing to be mainstream for 3D printing. Over time, Shen believes, his company will be able to do things like print in chocolate, if people want that.

“This is very early stage, as most people don’t know how to draw a 3D object,” Shen said. “But that will change over time. In 20 years, I believe a 3D printer will be part of everyone’s life.” 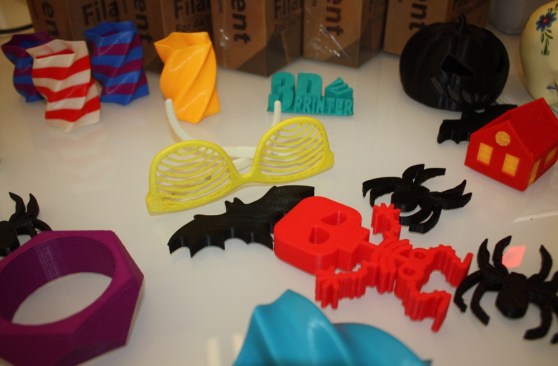 Above: Examples of objects you can print with XYZprinting’s machine