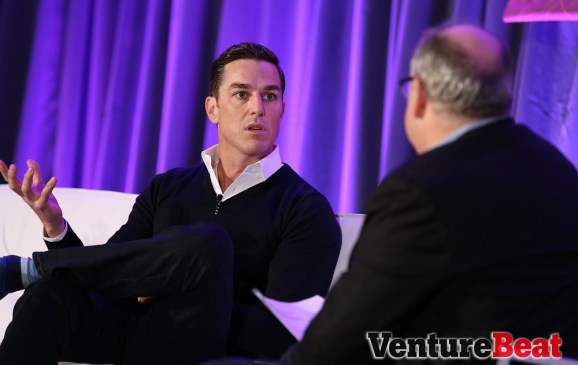 Andrew Wilson, CEO of Electronic Arts, at GamesBeat 2014 on Monday.

Electronic Arts chief executive Andrew Wilson said in an analyst call today that he expects the company’s growth in console, mobile, and PC games to continue in the coming quarters.

In a post-earnings call, Wilson said that players are playing EA games for longer periods of time, and that is turning into better overall performance for the company.

Wilson said players logged 1.9 billion hours in EA games in the quarter. The monthly active user count for EA’s mobile offerings was 155 million. EA Sports games averaged more than 40 million monthly active users in the quarter, up 250 percent from a year ago, thanks to Madden NFL Mobile and FIFA 15 Ultimate Team Mobile. Players have logged more than 89 million games of Madden NFL 15, up 48 percent from a year ago. The Ultimate Team concept was one reason why Madden gameplay is up over time, both on the consoles and on mobile.

That kind of performance is a big turnaround from a couple of years ago. Wilson took over as CEO last summer, and his emphasis is on improving financial performance and “putting players first.” Under previous CEO John Riccitiello, EA had bumpy financial performance, though the company put in place many of the titles that are reaping money for it today. EA was also unpopular, earning the crown for “worst company in America” thanks to votes by angry fans.

Now, EA is increasing its guidance for financial results in the future.

Last month, EA launched its EA Access, and it grew more than expected, Wilson. With EA Access, players can try out new titles for limited times for $5 a month. Chief operating officer Peter Moore said in the call that the program is successfully winning over new fans for existing franchises, and those people could become paying customers in the future.

But it didn’t produce much revenue in the quarter. He said EA is focused on getting new online players for FIFA in Korea and China. EA Mobile is also going to launch two new games in the coming quarter: SimCity Builder and Peggle Blast.

The giant video game publisher reported an earnings per share (EPS) of 73 cents compared to estimates of 53 cents. Non-GAAP revenues for the quarter were $1.22 billion versus Wall Street estimates of $1.16 billion. That compared to net income of 33 cents a share on revenue of $1.04 billion a year ago. In after-hours trading, EA’s stock price is up 2 percent to $38.35 a share.

EA launched big games such as The Sims 4 and its mainstay sports titles, Madden NFL 15, FIFA 15, and NHL 15, in the quarter. In the second fiscal quarter, players logged more than 1.9 billion hours playing EA games on consoles and the PC.

The Sims 4 was a disappointment, as it received a rating of 70 out of 100 on Metacritic, a review score aggregator, compared to 86 for The Sims 3. EA also didn’t have one of its usual games. Sports game fans suffered a blow last year when EA cancelled NCAA Football 15 due to lawsuits from ex-players and the NCAA’s decision not to renew its license with the veteran publisher.

EA postponed the launch of Battlefield Hardline, which takes the combat series into cops-and-robbers fighting, until March 17. Star Wars: Battlefront will arrive in 2015, while Battlefield 5 is expected to come in 2016. He said the “cops and criminals” fantasy of Battlefield Hardline really resonated with Battlefield fans and new players, too, but they wanted EA to go deeper with that fantasy, Wilson said. That’s why EA pushed Hardline from 2014 to 2015. Since Hardline will be released late in the fiscal year, a lot of revenue, such as what comes from downloadable content, will spill into the new fiscal year.

Need for Speed will be back in about a year, Wilson said. Overall, he expects a “tremendous slate” of games coming in fiscal year 2016, which ends March 31, 2016. Free-to-play is also expected to provide a lot of growth in the coming year, said chief financial officer Blake Jorgensen.

EA now has $2.3 billion in cash, cash equivalents, and short-term investments, compared to $1.4 billion a year ago. EA’s market capitalization is now $11.7 billion. 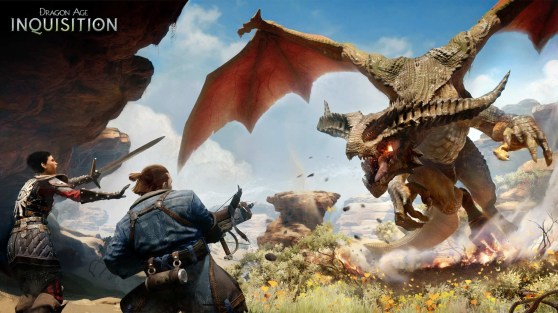 Above: Dragon Age is probably going to look great on every platform, but the studio knows that gamers are very sensitive about resolutions right now.