Women gamers have become a force in all corners of gaming, research company SuperData reported today.

The company compiled the numbers from several survey studies of at least 1,000 U.S. residents each, SuperData director of business development Sam Barberie said. This is the first time the company pulled together these statistics, so they can’t compare them to earlier years.

Joystiq reported on the statistics this morning. The breakdown, direct from SuperData: 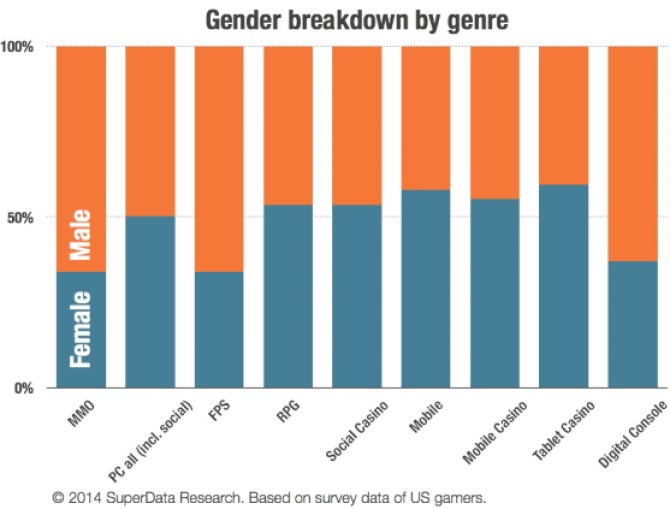 “Some of these categories we’ve known have been strongly female for years — casino games, for example,” Barberie said. “We’ve known women gamers have always been there, but perhaps digital gaming — social, mobile, digital PC, digital console — has further leveled the playing field by increasing access.”

SuperData has its own definition for MMOs, which includes trading card games (think Hearthstone: Heroes of Warcraft), multiplayer online battle arenas (League of Legends, Dota 2, and so on), and other massively online games that are not RPGs. For specific definitions, see the company’s terminology page.

People make some false assumptions about female gamers, SuperData senior analyst Stephanie Llamas posted in a blog. “The first is that women gamers are mostly casual gamers. But half of female PC gamers in the U.S. consider themselves to be mid-core or hardcore gamers. … In fact, women are the largest gaming demographic for PC role-playing games (54 percent), and they represent almost 40 percent of MMO and digital console gamers.”

Barberie said SuperData plans to update the study in the future.