America is becoming a very unequal place, with the top 1 percent of earners controlling more than one-third of the wealth. As the increasingly powerful billionaires create software that automates middle-class jobs out of existence, the technology industry is struggling with how to deal with rising inequality.

A European economist, Thomas Piketty, became a viral sensation for his book about the causes of and solutions for inequality. Notably, he called for taxation and redistribution of wealth. Now one of the richest men in the world, Bill Gates, has penned an insightful response to Piketty’s much discussed book, arguing that the famous economist is thinking about inequality all wrong.

“Capitalism does not self-correct toward greater equality — that is, excess wealth concentration can have a snowball effect if left unchecked…. Like Piketty, I’m also a big believer in the estate tax. Letting inheritors consume or allocate capital disproportionately simply based on the lottery of birth is not a smart or fair way to allocate resources.”

Gates is no fan of rampant inequality and believes that the government has a role in taxing the nation back to a state of fairness. The estate tax, or the tax on inheritance, is one way that governments can stop dynasties from taking over the U.S. economy. Unlike earned wealth, inherited wealth is not based on an innovator providing value to society.

“When I say that high levels of inequality are a problem, I don’t want to imply that the world is getting worse.”

Gates is right that while inequality may be up, poverty around the world has greatly decreased. In the past 20 years, the poverty rate has been cut in half, from 43 percent in 1990 to 21 percent in 2010.

“Contrary to Piketty’s rentier hypothesis, I don’t see anyone on the [Forbes 400 list of the wealthiest Americans] whose ancestors bought a great parcel of land in 1780 and have been accumulating family wealth by collecting rents ever since. In America, that old money is long gone — through instability, inflation, taxes, philanthropy, and spending.”

Piketty claims that “rentiers” maintain their position simply by letting others use their money, land, or other property — they’ve been successful in the past but have not necessarily continued to add the same value on a consistent basis. But Gates argues that the number of rags-to-riches billionaires in the world has increased. And the number of billionaires that come from wealthy families has been cut in half since 1982, from 60 percent then to 32 percent now.

“It’s not that we should ignore the wealth and income data. But consumption data may be even more important for understanding human welfare. At a minimum, it shows a different — and generally rosier — picture from the one that Piketty paints. Ideally, I’d like to see studies that draw from wealth, income, and consumption data together.”

While income inequality is up, it’s harder to say whether the purchasing power of the middle and lower classes has decreased. This is what economists call “consumption inequality.” Furthermore, some of the income inequality is due to increasing concentration at the very top, where the 0.1 percent has pulled even farther ahead of the rest of the 1 percent. 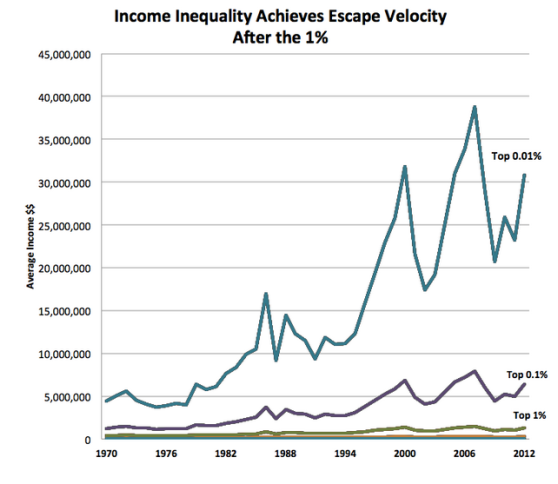 Consumption inequality by some measures is actually down, as the poor are able to afford more consumer goods and food than they were in the past.

Gates’ primary argument seems to be asking us to recognize that many capitalists provide value to society, and especially to the poor, and that we shouldn’t take away their economic incentives.