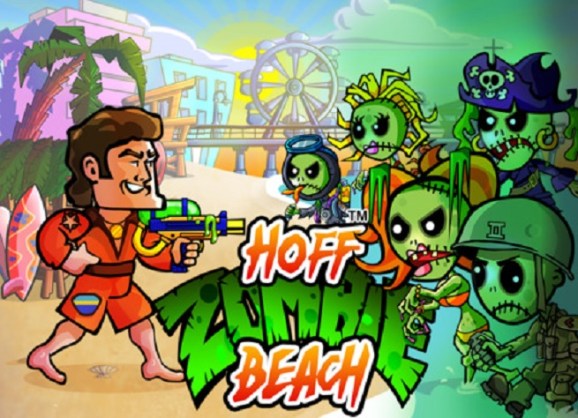 Watch out, Kim Kardashian. David Hasselhoff is coming out with guns blazing with the launch of the Hoff Zombie Beach mobile shooter game.

The cartoonish, arcade-style shooter from Strike Team Games is the latest to try to combine celebrity branding and a mobile app. Kim Kardashian: Hollywood from Glu Mobile could generate $200 million in revenue this year. Other celebrities are no doubt aware of the opportunity in the lucrative mobile market, which could hit as high as $20 billion by the end of the year, and Hasselhoff is one of the celebrities to jump in early the chance.

The app launch for the former Baywatch and Knight Rider star is timed for a pre-Halloween release on the iPhone, as it’s a zombie-friendly holiday. Hasselhoff says he is a lifelong fan of classic arcade games like Space Invaders and Centipedes.

He’s also working on a 3D printing project. No doubt you’ll be able to print the head of Hasselhoff, known as the Hoff.

“If you have an iPhone, you know apps are a magical thing. To have my own gaming app is cool and very much a dream,” David Hasselhoff said in a statement. “Hoff Zombie Beach is for everybody; anyone from kids to grandparents can play this game. You just see how fast you can kill zombies — it’s a lot of fun.

“From Knight Rider to Baywatch, I’ve been around for a while and the reason for my longevity? Staying cool and hip! Hip with what’s going on in the world and hip with the social media scene – isn’t it pretty hip to make your own app that everyone can play? I love the fact I can stay connected with my fans via their smartphone.”

In the game, you play Hoff himself, defending a beach from a mutant wave of zombies approaching from the sea. The weapons include an exploding seagull and a goo gun. You have to kill the zombies before they destroy the sand castles around The Hoff’s feet.

It has social links, and a Hoff Soundboard offers sound bites of “Hoffisms” that you can unlock through the levels. It has 22 kinds of zombies, 34 weapons, and three levels with eight stages each as well as different conditions for day, night, and fog.