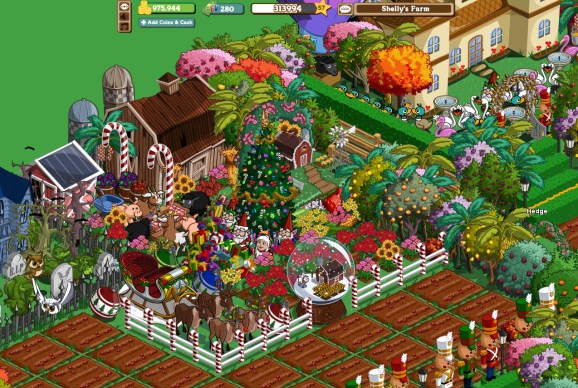 Remember when Farmville seemed like the biggest thing in gaming? Those days feel longer and longer ago.

According to Eilers Research, Facebook gaming revenues were down 2 percent in the third quarter of 2014 when compared to the previous year. Eilers noted that this was the first time game revenues declined in a year-over-year basis. It also said that management expects the trend to continue as fewer people use Facebook on their desktop computers.

Social gaming on Facebook is clearly having a hard time keeping up with mobile gaming, which is a huge and growing market that could hit as high as $20 billion by the end of 2014. A third of Facebook’s users access the service only on their phones and tablets. That helps to give the company a lot of mobile ad revenue, but it’s shrinking the number of people who used to play desktop Facebook games.

The top five apps for Facebook, in terms of revenue generated, are Candy Crush Saga, DoubleDown Casino, Farmville 2, Slotomania, and Farm Heroes Saga. You can see a few familiar trends there. Farmville and the Saga titles are big (and familiar) brands, while the rest are casino games. In fact, according to Eilers, casino Facebook games accounted for 13 of the 25 grossing apps.

Still, Eilers notes that this decline isn’t a huge problem. “The investment community is not overly concerned about Facebook’s desktop game business, as it represented just 8 percent of its total revenues in 3Q14 versus 11 percent in the prior year period; however, we believe it’s still important to monitor in terms of the evolution/trends of the social game market,” it stated in its analysis on Facebook’s third quarter earning report.

So, Facebook is losing gamers, but it’s making up the money elsewhere.