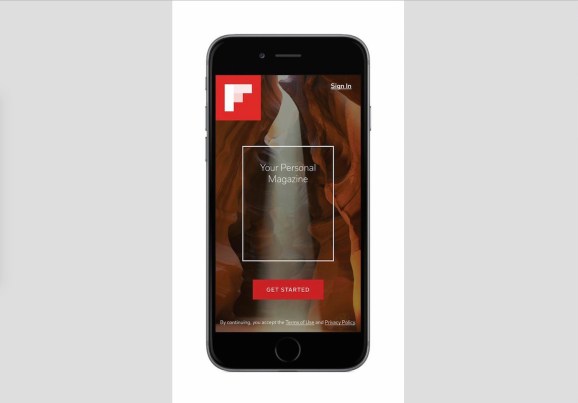 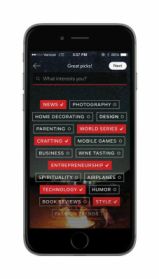 Above: A screenshot of Flipboard’s new Topic Picker via the updated iPhone app.

At the heart of “Flipboard 3.0” is deep integration with technology from Zite, the mobile news recommendation service Flipboard acquired from CNN back in March. Zite is known for being able to recommend a large selection of fresh content about both broad and specific categories. Today’s Flipboard update adapts that intelligent recommendation technology in the form of 34,000 topics users can now follow.

In particular, I noticed that Zite’s technology really does an awesome job of helping you discover great user-created digital magazines on Flipboard. That’s significant because user-created Flipboard magazines have been around for a while now, but I’m guessing a lot of people weren’t motivated to discover or follow good ones. (Sifting through a stranger’s curated digital magazines sounds about as fun as reading a collection of persuasive essays written by community college students. You’ll find some gems, but you’ll have to sift through a lot of dullness to find them.)

“We didn’t want discovering [user-created] magazines to be a chore,” Flipboard cofounder and CEO Mike McCue told VentureBeat in an interview.

The updated Flipboard addresses the problem of finding the best digital magazines by first asking you to select a handful of topics you’re interested in. When you start reading content based on a particular topic, Flipboard will then suggest other topics to follow and related magazines worth checking out. The idea, McCue told me, is to slowly refine how Flipboard delivers and recommends content by occasionally prompting you to follow or favorite the stuff you enjoy. 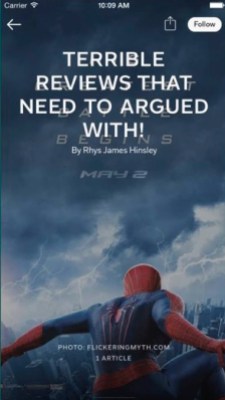 Above: One of the over 10,000 digital magazines created by Flipboard users.

Some of the user-created magazines I discovered made use of rich media to stand out from what you’d expect from a digital magazine. For instance, there’s a magazine created by McCue and another person on Flipboard’s team with the sole purpose of sharing new songs you may enjoy. And because Flipboard supports embedded media, you can start listening to songs (hosted on SoundCloud and elsewhere) while you browse. Another magazine called “Eye Candy” is the work of a professional photographer who wanted to share single, beautiful shots of nature. But my favorite from quickly scanning through digital magazines was one titled “Terrible Reviews That Need To Be Argued With!” which collects film reviews that beg readers to do exactly as it describes.

Digital magazines also feature pretty full-screen cover artwork that you have to flip past to get to the content inside, just like with a printed publication. And since you aren’t spending upwards of $5 per magazine issue, it’s OK if some of the better digital magazines don’t feature new content as regularly as you’d like. Essentially, you can just follow more magazines or users that share or consume content similar to your own interests. But you also have the option of seeing a collection of content from the people you follow on social networks.

Last but not least, people who create digital magazines on Flipboard will now have access to a new audience analytics dashboard (pictured below). So if you actively share new content via a custom magazine, you now have a tool to help you gauge what people are responding to. 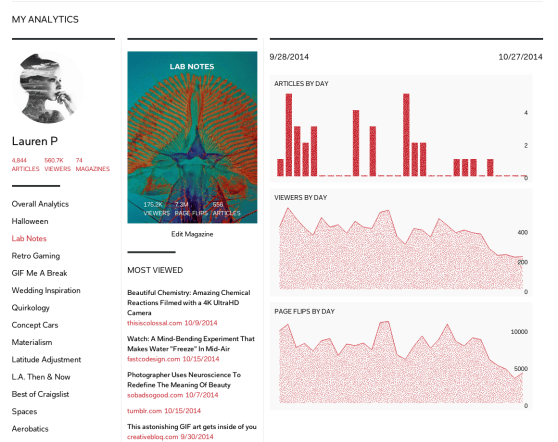 Above: A screenshot of Flipboard’s new “My Analytics” dashboard on Android for those who’ve created a digital magazine and want to monitor what readers think of it.

But not everyone wants to work to find great content. I know people my age who still insist on reading print newspapers every day (savages!) because it gives them a finite number of articles curated by an editorial team. Flipboard’s version of this is a new “Daily Edition” section that a team of editors updates every morning. It features regular sections, such as a song-of-the-day and a daily animated GIF file.

“The Daily Edition will change throughout the day, but really it’s intended as a comprehensive way to catch up on the news without going on forever,” McCue explained. That means there’s no “infinite scroll” feature that automatically loads new content for as long as you’re willing to consume it. “It’s something you can finish.”

The new version also offers a revised design for smartphones, which updates the navigation to make better use of the smaller screen. No longer are you navigating through categories and other sections via an opening screen of clearly marked “tiles.” Instead, the updated design includes a bottom navigation bar with tabs for viewing your Flipboard profile, a search function, a tiled view of all the things you’re following (including Daily Edition), the home screen, and a new notifications feed.

Speaking of the notifications feed, Flipboard built this to get users to share stories they discover through the service. You tap a button a content page to share it via a handful of social channels or email. If the person you’re sharing something with is also a Flipboard user, it’ll pop up along with a short message within the new feed.

Flipboard said the new mobile design was particularly important because 70 percent of users are accessing the service from a smartphone, which is surprising considering that tablets seem like the preferred device for viewing a magazine page.

As for Flipboard’s updated mobile apps, both an iPhone version and an Android version are available today for free.