During the full-day events Google plans to share the latest on Ara, the company’s open hardware platform for creating highly-modular smartphones, and promises to have Project Ara team members at all event sites. Even though the speakers will be in Mountain View and Singapore, bidirectional video links will be available at the satellite locations.

Google’s first Project Ara developer conference took place online on April 15 and 16. The company announced at the time that it was targeting next year for a $50 modular phone, so today’s news shouldn’t come as much of a shock.

The company says the principal focus of next year’s event will be the next major release of the Ara Module Developers Kit (MDK): version 0.20. The company also says it will demo the latest Ara prototype and developer hardware, highlight some ongoing module development efforts from select developers, and “share early plans for a market pilot in 2015.”

You can apply to register for the event here. As you can see below, the fee is $200 for Mountain View and Singapore, $50 for the satellite locations, and $25 for students regardless of the site. 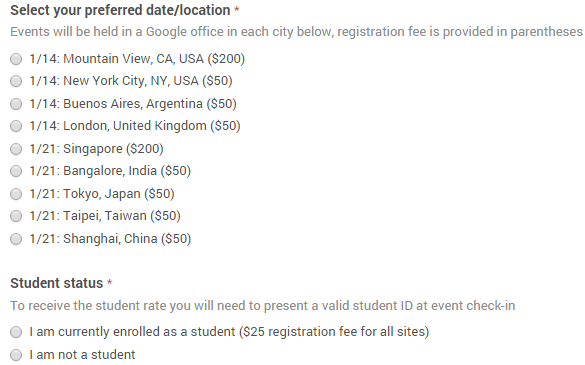 The application deadline is November 26, 2014. Google says it will let you know shortly after you submit your application (no later than December 2) whether you can attend. The company also may add or remove satellite locations “based on developer interest.”

Because Ara smartphones are modular, developers are particularly important for the project. Conferences like this one are critical to nurturing a community interested in building not just the software but the removable hardware components that device owners will be able to swap out to add new features.

While the conference is aimed at developers, there is indeed a registration section for press. Since there will be news coming out of the event, you can expect VentureBeat will be present.