A few weeks after Hewlett-Packard (HP) confirmed it was splitting into two companies, the company declared at a press event in New York City today that it is going big into 3D printing and releasing a new product category of “immersive computing.”

The two are related by the company’s newfound interest in marrying the digital and physical worlds, which it is calling “blended reality.” A new 3D printing technology, which HP bills as Multi Jet Fusion, promises speed (as much as 10x faster than today’s 3D printers), quality, and low cost. The company rolled out a large, industrial-grade 3D printer which, it said, is capable of printing some of its own geared parts. The printer will be released in 2016.

In the lab, HP said, are planned advances in color, texture, and elasticity that are not possible in current 3D printing. HP has set some lofty goals for its 3D dreams, saying that 3D technology is nothing less than “a tool for a new industrial revolution.”

The other major product announcement from HP today is the consumer/prosumer-targeted Sprout PC, which the company described as “a new product category” that is the first in its new line of blended reality offerings.

The Windows 8-based Sprout — which, as VentureBeat’s Kia Kokalitcheva has reported, almost didn’t happen — combines a 23-inch touch-screen HD display, a touch-recognizing capacitive mat, a PC, and an overhead projector/3-D camera-scanner system. Downward projections can be modified by hand motions or a stylus, providing input to the computer. Any real object can be placed on the surface to be scanned and turned into a model, thus bringing 3D into personal computing.

The PC contains an Intel i7 processor and a terabyte of storage, and the camera inventory includes a HP high-res camera with up to 4.6 megapixels, the Intel RealSense 3D Camera, and a 720p webcam. The company describes the display-plus-touchable-mat as a “two screen” setup. Pre-orders begin today, and Sprout will be available in selected stores in the U.S. beginning November 9. 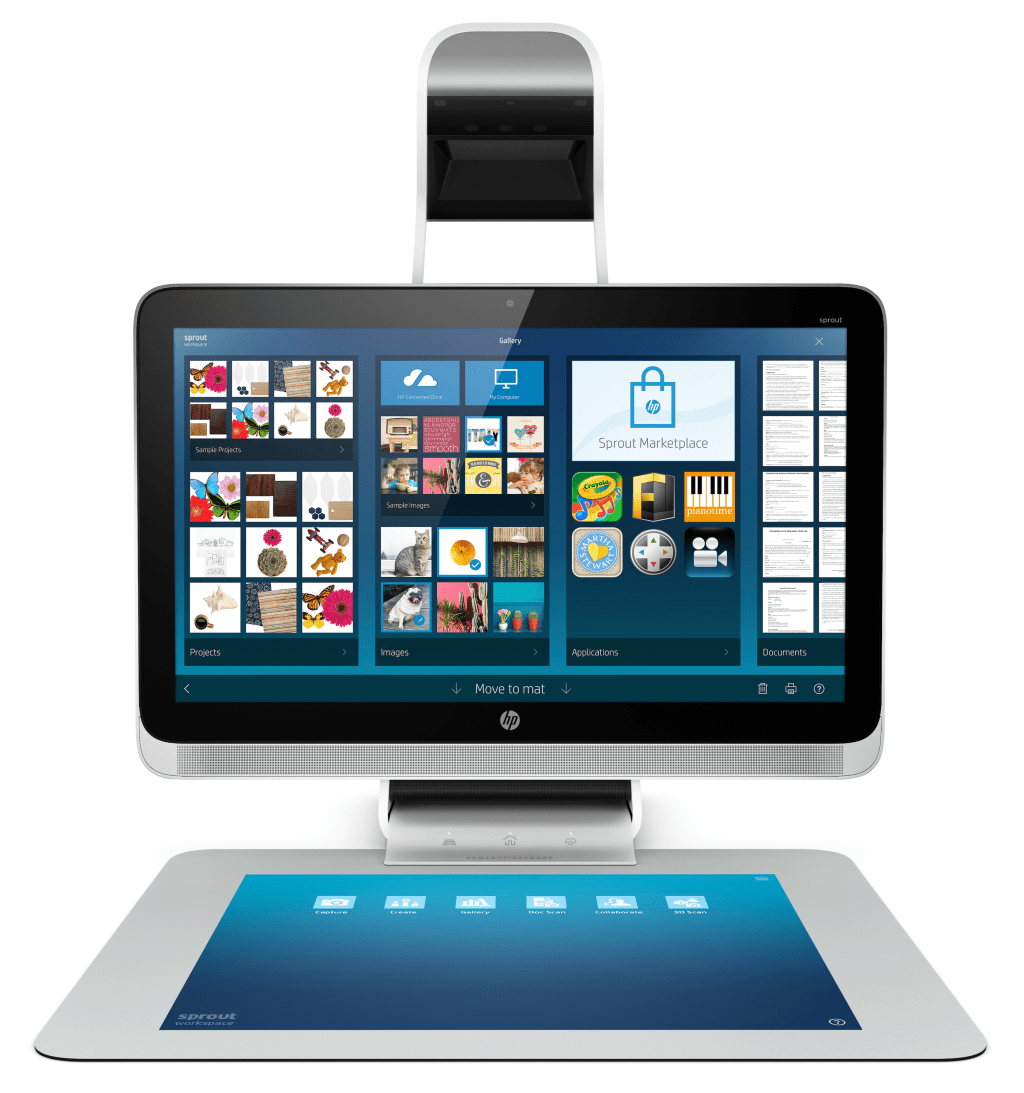 Applications, the company said, could include new kinds of collaboration between remote participants, but mostly it emphasized that the setup introduces the use of hands into personal computing. Also being released is Sprout Workspace, where 3D models can be worked on and 2D and 3D can work side-by-side, among other things.

Sprout’s 3D capabilities boost the 3D ecosystem that HP is trying to build. That ecosystem so far includes an upcoming SDK for Sprout Workspace, a Sprout Marketplace for applications, and an Open Platform status for the new 3D printers so that outside developers can expand the capabilities. The Marketplace will feature several apps designed for this particular dual-screen environment, including Martha Stewart CraftStudio, DreamWorks Animation Story Producer, Crayola’s Draw & Sing, GestureWorks Gameplay, and HP’s Create, Collaborate, and Capture.

But the obvious missing piece for the $1900 Sprout is a consumer- or prosumer-level 3D printer. Steve Nigro, HP SVP for printing, suggested to VentureBeat that service bureaus like Shapeways — which might of course use the new HP industrial-level printer — can serve that function.