Pandora might be the least exciting of the major streaming music services, in part because it doesn’t offer on-demand music playback or a robust premium monthly subscription service. That, however, didn’t stop the decade-old music company from beating all of its competitors last month.

Pandora ranked as No. 1 among music apps for most downloads and total revenue generated in September, according to App Annie’s new Music App Index report released today. App Annie is known for monitoring downloads, popularity, and sales of iOS apps and Android apps featured in the Google Play store.

The revenue figure for Pandora is hardly surprising, as just last week the company reported that it reached $100 million in mobile ad revenue for the first time in Q3 2014. Considering that most of Pandora’s rivals also offer free ad-based access to their services, this is pretty significant.

Trailing Pandora in highest revenue for “music listening apps” was Spotify at No. 2, followed by Apple’s Beats Music, Rdio, Rhapsody, and Slacker Radio. Meanwhile the Google-owned Songza managed to grab the 10th highest spot, but Google’s “All Access” premium music service was nowhere to be found. 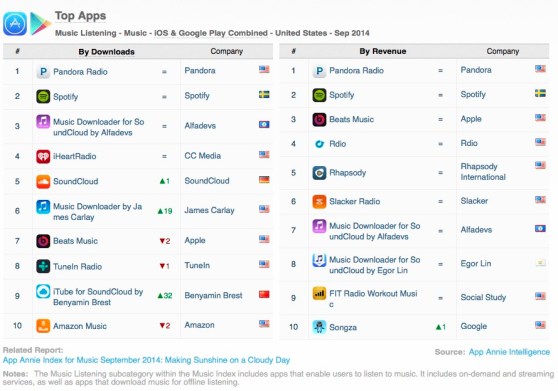 Above: App Annie’s rankings for the top music listening apps in September 2014.

Tellingly, app downloads for Beats Music ranked seventh highest, with Pandora and Spotify commanding the top two spots. But this shouldn’t really be an indication of Beats doing poorly. Unlike most of its rivals, Beats doesn’t offer a free, ad-supported version of its service. Therefore, the number of app downloads is irrelevant as long as its revenue continues to grow.

Related: Why Pandora’s new analytics tool is a winner for both the music company & musicians

The rankings for revenue are fairly interesting for “music listening” apps, but it’s hard to draw month-over-month comparisons as this is only the first time App Annie has offered a music index report. Regardless of that, the report did provide a few other interesting insights worth noting. 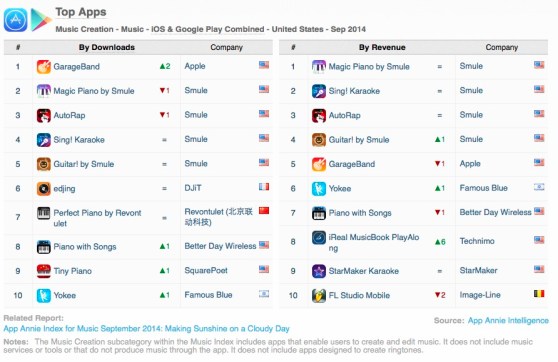 Above: App Annie’s rankings for the top music creation apps in September 2014

App Annie also provided a sub-category of “music creation” apps, which the report states is a section of the mobile music app market that represents “an overlooked gold mine.” Music company Smule emerged as the clear leader in the report, with Magic Piano, AutoRap, Sing! Karaoke, and Guitar! apps all ranking in the top five for revenue and downloads in September.