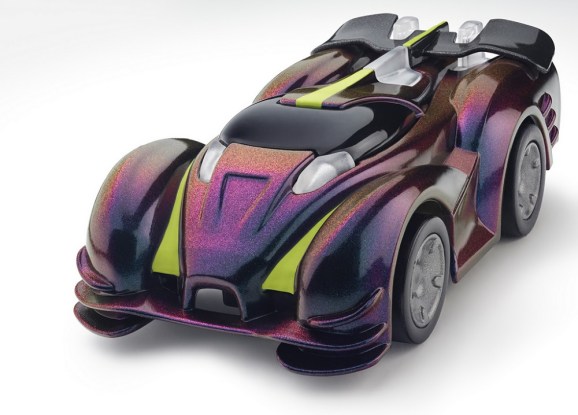 Anki has hired two new executives with loads of gaming experience to take its car-battle racing games to the next level.

San Francisco-based Anki has hired Joby Otero, the former creative director for Activision’s Skylanders franchise, as its chief creative officer. And it has hired Craig Rechenmacher, an Electronic Arts veteran, as its chief marketing officer. With the new hires, Anki is strengthening its gaming foundation and creative vision to bring a completely new dynamic to the interactive toy sector.

With Anki Drive, you use your smartphone to control a car racing around a track against robotic cars with sophisticated artificial intelligence. The latest upgrade shows how it’s possible to launch a digital hybrid toy and upgrade it over time.

In the game, you roll out a mat on the ground that serves as a race track. You can place two cars down on the track, and they start driving around on their own. Then those vehicles adapt and learn how to compete better. You can then control the game through the iOS app, which enables you to steer your own car and fire vehicle weapons. While the cars can keep themselves racing around the track, you can make them do tight or wide turns. Founded by robotics experts at Carnegie Mellon University, Silicon Valley startup Anki has worked on the technology for six years and has raised $50 million.

Activision’s Skylanders toy-game products help bring “toys to life,” where you set a toy character on a platform to insert that character into a video game. Then you can play that game and save your progress on physical memory on the toy. Such experience should prove valuable to Anki.

“Anki Drive delivers an intense racing video game experience in the real world as players battle against their friends and robot racers,” said Boris Sofman, Anki’s founder and CEO. “Only with the power of robotics can we help usher in a new way of interactive play, one that exists in both the physical and virtual world. The team of video game veterans we’ve assembled at Anki will help usher in richer gameplay environments, new character and story developments, and unique gameplay features that will only make the Anki Drive experience that much more exciting and unique.”

Otero has 23 years of experience in games, and he was mostly recently vice president of art and technology at Activision, where he was a key leader driving the creation of the billion-dollar Skylanders franchise – combining toys and video games. Rechenmacher has 17 years of experience driving brand, product, digital marketing, and business development at leading global interactive entertainment and gaming companies. He most recently held a position as chief marketing officer of Slacker Radio. Before that, he was vice president of marketing and business development for Origin, EA’s direct-to-consumer digital distribution platform.

Anki Drive is currently available on iOS and Android devices, with a starter kit available for $150. Expansion cars cost $50.

The design of Anki Drive is clever. The track mat has an ink that is embedded with a code. That tells the car where it is on the track and where it is relative to other cars. Each car also a tiny camera under it that can read that information. The cars have a 50-megahertz processor, a multicolor LED, and a Bluetooth low-energy radio to communicate with the smartphone. Anki claims the cars can drive so precisely that the real-world equivalent would be driving down a highway at 250 miles per hour with a tenth-of-an-inch clearance on either side.

You can use the free iOS app to build the character of the car. The cars are able to pass up each other, block opponents, or nudge a rival. And they do so by thinking on their own.