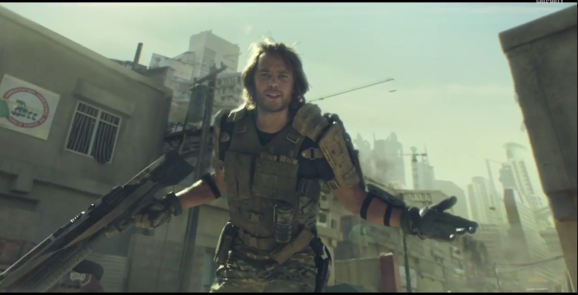 Call of Duty: Advanced Warfare debuts next week, and that means it’s time for publisher Activision’s marketing team to take over your television.

For the year’s installment of the annual military-shooter franchise, the company turned to Battleship and Lone Survivor director to make their live-action commercial. Berg, who is also responsible for the Friday Night Lights film and TV drama, re-teamed with Taylor Kitsch (who starred as Tim Riggins in football show) to re-create the action of Advanced Warfare in real life.

“We wanted to replicate what you’ll see when you play it,” Berg said in an interview with Hollywood industry magazine Variety. “It was important to Activision that the [commercial is] accurate and not promising something that it isn’t. We didn’t want to overpromise what the game could deliver. Everything we designed, we designed with the game guys there.”

That includes bikes that hover, jet packs, and gravity-defying leaps — although model Emily Ratajkowski, who has a cameo in the ad, likely isn’t fully representative of Call of Duty’s in-game action.

This isn’t the first time Activision has worked with a Hollywood director on their advertisements. Earlier this year, Activision hired visionary director Joseph Kosinski, who made Oblivion with Tom Cruise, to helm the live-action ad for sci-fi shooter Destiny.

Activision is also trying to bring some Hollywood prestige to Advanced Warfare itself. Actor Kevin Spacey plays a character in the game. This required him to give a performance and to stand in for a full face scan that enabled developer Sledgehammer to digitally insert him into the game.

You can see snippets of Spacey’s in-game acting below: