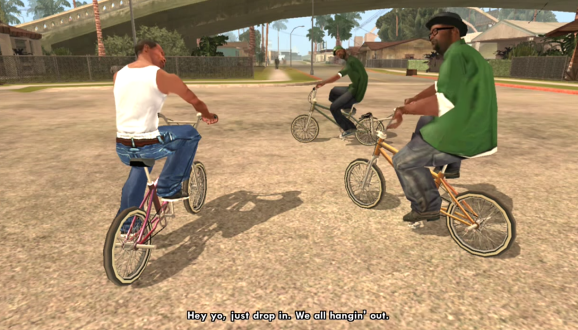 Remastering a classic video game usually results in the ultimate version, but it seems the new Xbox 360 version of the open-world action title Grand Theft Auto: San Andreas is far from definitive.

The new high-definition remake of GTA: San Andreas replaced the Xbox Classics version on the Xbox digital store last weekend, coinciding with the game’s 10th anniversary. But Digital Foundry took a detailed look at the remastered game, which features “720p resolution, enhanced draw distance, and Achievement support” and concluded that it’s a port of the mobile version developer Rockstar previously released on iOS and Android. Gamers expecting a definitive San Andreas experience will be disappointed with what is described as a buggy mobile port.

“Unfortunately, aside from the inclusion of Achievements, there’s very little love given to this new edition,” said Digital Foundry. “Certainly, the mobile release on which the 360 game is based appears to lack effects, such as the screen distortion designed to emulate heat haze while radio station music is pared back, presumably because of licensing issues. This 360 port also suffers from glaringly obvious bugs, like audio cutting out completely during some cutscenes.”

The new Xbox 360 version also suffers in terms of framerate, resulting in an uneven viewing experience.

“What’s even more unimpressive is that framerate is capped to 30fps [frames per second], and you don’t even get a locked, consistent performance level,” said Digital Foundry. “Traveling around Los Santos, we note occasional hitching and stuttering, with frame-time dips often in excess of 60ms, which translates into momentary dips where the game is running at the equivalent of 15fps.”

In summary, Digital Foundry concluded that the HD remaster is far from definitive: “What could have been an opportunity to produce the ultimate, definitive version of GTA: San Andreas comes across as something of a missed opportunity. Scaled up to 720p and beyond, even with the enhanced assets, it’s clear that the level of detail in the assets doesn’t really stand up to scrutiny.”

Ten years on, though, it’s still a great game, and if you haven’t played it before, there are certainly worse ways to spend $4.