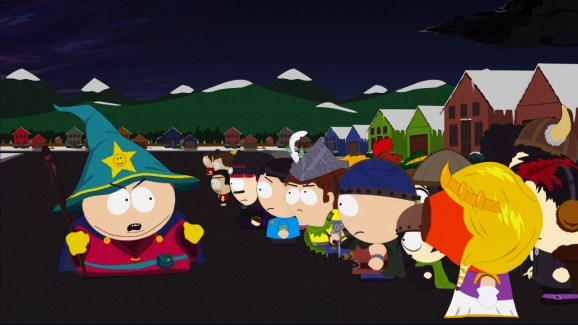 Eric Cartman rallies his troops (such as they are) in South Park: The Stick of Truth.

Ubisoft reported that it generated $156.5 million (€124.1 million) in revenues in Q2 of its fiscal 2015. That’s down 43 percent from $275.5 million (€217.7 million) over the same period in the previous year. The downward comparison is likely due to Ubisoft releasing a new Rayman last year, but the company notes that it performed better than it anticipated. This is due to several factors including strong sales of Watch Dogs, its biggest recent triple-A release; surging digital distribution revenues; and firm back-catalog sales.

“The very strong momentum we saw at the beginning of the fiscal year carried on into the second quarter,” Ubisoft chief executive officer Yves Guillemot said in a statement. “That enabled us to once again exceed our performance expectations. Ubisoft continued to capitalize on the popularity of new consoles, the successful launch of Watch Dogs, the quality of its back catalog, and the considerable growth of the digital segment. Consequently, our operating income and cash flows improved significantly during the period.”

Watch Dogs, an open-world action game, reached 9 million in total sales, and that was one of the biggest contributor to Ubisoft’s bottom line over the last six months.

But the biggest area of growth for the publisher is its digital business. The company saw a surge of 90.4 percent to $170 million (€134.7 million) over the first half of fiscal 2015. That represents 27.8 percent of Ubisoft’s total revenues.

The company notes that digital distribution of full games played a big part in that success, but it also generated significant cash from its mobile games and downloadable content.

Ubisoft is also seeing strong desire for its back catalog. Games that released in previous quarters that are still selling well include Assassin’s Creed IV: Black Flag, South Park: The Stick of Truth, Far Cry 3, and Rayman: Legends. Those, along with others, brought in $143.4 million in sales for the publisher through its fiscal first half of the year.