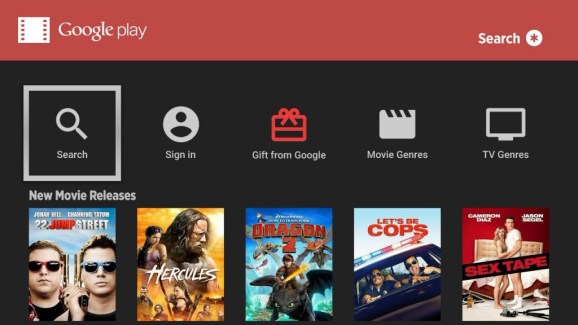 The latest app making its debut in the Roku Channel store today is Google Play Movies & TV, which is the search giant’s digital media store for buying and renting videos.

The move is a tad interesting because Google is currently in the middle of a big promotional push for its own Android TV operating system, which powers several set-top boxes made by a variety of hardware manufacturers.

You’d expect that Google wouldn’t want to take attention away from its new Nexus Player by allowing people to gain access to its video services on rival devices. However, this actually makes sense when you consider that most people probably aren’t using Google Play to buy movies and TV shows — and it’s unlikely that this will change if consumers can’t gain access to the Google Play Movies & TV show service on the most popular devices.

The app itself is pretty standard among video-focused applications. The one unique feature worth mentioning is that Google will provide “info cards” related to the content you’re watching. For example, pressing pause lets you identify the actors within a specific movie. Google is also offering the first X-Men movie (2003) for free to those that sign up for the service or download the app on Roku.