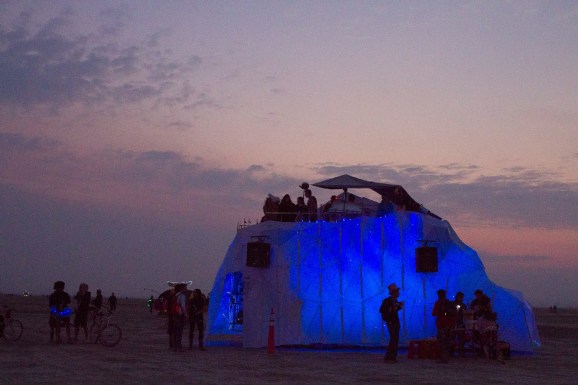 Justin Kan says building a refrigerated art car for Burning Man was his proudest achievement of 2014.

VIENNA, Austria — By anyone’s definition, Justin Kan has had a monster year in 2014.

It started with Kan selling his startup Exec to Handybook in an all-stock deal (the amount was undisclosed). Then, in June, he joined Y Combinator as a partner. And finally, in August, Amazon spent $970 million to acquire Twitch, the third iteration of a company Kan started in 2007 as a lame Internet reality TV show starring himself.

In seven years, he’s gone from live-streaming goofball to an experienced entrepreneur whose advice is sought by a new generation of founders.

And yet, the thing he’s most proud of this year has nothing to do with any of these milestones. Instead, what makes Kan glow with pride is showing off pictures of a refrigerated art car he and some friends built for Burning Man.

Kan said he had to learn a number of physical skills involving industrial design, material science, and welding to create the car. The large metal frame was covered with metal plates and LED lights that changed color. Inside, he and a group of friends installed an industrial refrigeration system to keep it cool in the hot desert days.

They called the structure “Titanic’s End.”

“There’s something very satisfying about making anything with your hands,” Kan said.

Of course, it doesn’t hurt that Kan now has the time to take on such projects. These days, he’s primarily working as a mentor to Y Combinator startups and traveling extensively to promote its work. Kan was speaking at the Pioneers Festival in Austria when I caught up with him this week.

The kind of reverence he experienced here shows just how far he’s traveled since the world got its first look at him in 2007 on Justin.tv. Back then, the 23-year-old strapped a small video camera to his baseball cap and live-streamed his everyday life. He calls it a “terrible idea” now because not only were he and his friends not entertaining, but they had no idea how to make a show that anyone would want to watch.

But along the way, the group turned Justin.tv into a platform others could use to livestream themselves. This was a better idea, perhaps, but one that also eventually sputtered. The team was casting around for other ways to reinvent the company when one of the cofounders, Emmett Shear, began talking up one area of Justin.tv that seemed to be getting traction: people livestreaming themselves playing video games.

Kan says he was skeptical at first, but after taking a closer look, he realized Shear was onto something. Eventually, the company relaunched the video gaming streaming channel as a new company called Twitch, with Shear as CEO. Kan said he was content to step aside so he could move on to other projects. Eventually, Justin.tv was officially shut down, though Kan retained a sizable stake in Twitch.

From there, Kan started Exec in 2012, an on-demand errand service. When he got an offer to sell in January to Handybook in exchange for stock, he knew he was ready to move on. It was a bit risky, because Exec was doing okay, but Kan says Handybook is growing nicely and that he believes the stock will eventually pay off.

Without a clear direction, Kan began looking for opportunities that would give him a chance to learn new things. Building the art car was part of that quest. But so was joining Y Combinator.

He finds working with new startups energizing, a chance to learn about new ideas and new technologies while also trying to figure out what experiences of his own could be educational to a 20-something entrepreneur working on their first company.

Still, at the age of 31, he finds it odd at times to realize he’s the elder statesmen compared to many of the much younger founders coming through the accelerator.

Just as he was settling into his new life, though, Twitch was blowing up. It had become one the biggest livestreaming sites on the Internet, and that brought acquisition offers from Google and Yahoo. In August, Amazon acquired Twitch for $1 billion.

Kan won’t say how much he made from the deal, but he calls it a “game changer” for him personally.

At the Pioneers Festival, Kan spoke on stage, and in our interview later, about lessons he took away from his seven-year road to success.

He advised startups to focus on the basics: Talk frequently to users and get feedback to keep changing the product. Keep iterating until you’ve got something users really want.

He noted that Twitch was the third iteration of Justin.tv. But along the way, there were many other ideas for pivots that the team pursued and then discarded. These included concepts such as a video-streaming service for Twitter.

“The original idea for Justin.tv was a terrible idea,” he said. “So if something like that can eventually become successful, then anyone can be successful.”