We posed the challenge, and indie developers stepped forward, taking to Twitter to sell us on their games in 140 characters or less. Talk about an elevator pitch. So far we’ve covered nine of our favorites, which means only one lucky pick remains.

The final entry in our Pitch Us in One Tweet 2014 contest asks what kind of crazy shenanigans a detective can get into when her partner is a fedora-wearing cat.

Availability: It’s coming to PC, Mac, and Linux, as well as Steam.

Hot Tin Roof is a noir Metroid meets LA Noire with an Inspector Gadget revolver. Your sidekick is Franky, a cat in a fedora. #GamesBeatPitch

Why I picked this: To be honest, I have a hard time passing up anything that involves cats. But I was also intrigued: Metroid and Inspector Gadget are two things I definitely like, so if you mixed in noir, I’m not sure what you would get. Maybe something awesome?

What is it? Glass Bottom Games must also have a thing for cats because one of its previous games, Jones on Fire, starred a firefighter who saved dozens of felines from burning flames. Visually, Jones on Fire shares a lot in common with Hot Tin Roof — both feature 3D, rectangular-shaped heroes (this character’s a private investigator named Emma Jones) who buddy up with cats (this time, a cool furball named Franky).

Above: Walking around the city feels weird but good.

You and Franky walk around a city, chatting up other animals for clues and leads in your investigation — whatever that is, I’m not entirely sure yet. Exploring the city is a strange experience: Reach the end of a walkway, and you can sometimes keep going — the perspective changing as you turn around a corner, revealing more of the world that was previously hidden.

It didn’t take long for this noir-themed adventure to take me to an underground dump where rats were protesting their overrulers (mostly in demand of cheese). I had to use my platforming skills and an assortment of wacky bullets to get around. You can load four bullets into a chamber at once and mix and match them to pull off quick combinations — so you could use the bubble ammo to reveal a secret platform or lever, regular rounds to shoot breakable objects (or sometimes Franky by accident ), and then grapplers to attach and swing over to far-off ledges or walls.

Glass Bottom Games founder Megan Fox told GamesBeat that “one of the ammo types is entirely optional, and its associated ability is mostly used to unlock secrets or explore the backstory of the world [and] characters.”

Is it good? The version I played was the PAX Prime 2014 demo. It’s still in a rough state, meaning I experienced some glitches and choppy controls — I found the bullet firing a bit too loud, and Franky had a tendency to get himself in unfortunate situations. Glass Bottom still has plenty of time to refine the gameplay before launch in February. 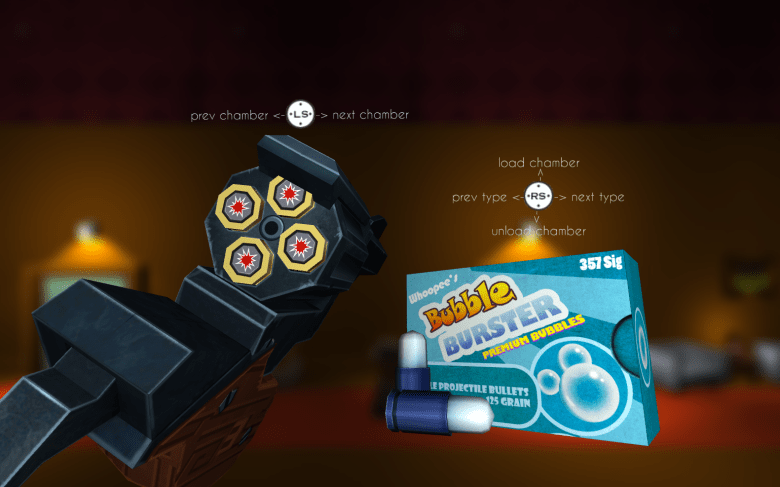 The premise is cute and interesting, and I was surprised at how challenging the platforming was. I definitely enjoyed loading rounds into the different chambers and shooting them off in succession to try new combinations. And it was a nice extra touch to be able to pick dialogue choices in what could be a simply linear game.

With some fine-tuning, Hot Tin Roof could be a charming twist on noir. Because crime and cats were just made for each other.

Look for it: Check Steam this February or Glass Bottom Games’ website if you want to preorder it before then.

This is the last of 10 selections from our “Pitch us in one Tweet” contest. You can find the rest of our choices by following this tag.