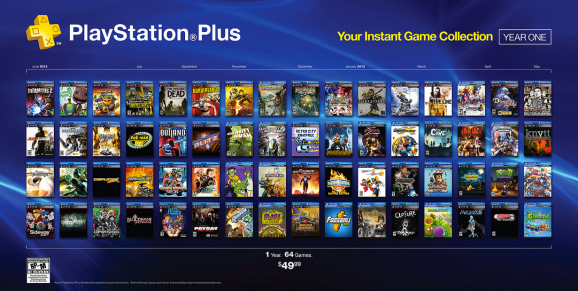 PlayStation Plus offers games at no extra cost and other bonuses.

Sony must feel good about the performance of its gaming business, because it is finally revealing some numbers it has kept hidden for quite some time.

The company revealed today that 7.9 million people subscribe to the PlayStation Plus service. This is the first time Sony has spelled out just how popular this premium membership program really is. PS Plus enables Sony to bring in extra cash on a regular basis with its subscription model. This helped the company’s bottom line — although Sony as a corporation reported losses for its latest fiscal quarter earlier today.

Players can subscribe to PS Plus for $18 for three months or $50 every year to get access to the program’s bonuses. These includes an Instant Library of games, in which Sony provides PS Plus owners downloads one or two titles for the PlayStation 4, PlayStation 3, or Vita systems every month. Members also get select discounts on releases in the PlayStation Network store.

While Sony has never shared PS Plus’s numbers before, it’s likely that it has more subscribers than ever. That’s due to the surging PS4 system, which leads in console sales, requires a PS Plus subscription for online multiplayer. This is a huge factor in spurring players to pick up the membership — especially considering major releases like the sci-fi shooter Destiny are entirely online and are useless without a membership to Sony’s premium online service.

For comparison, Microsoft has approximately 17 million Xbox Live Gold subscribers (at least on Xbox 360), according to a Rock Paper Shotgun interview with Wargaming boss Victor Kislyi. Gold and PS Plus have recently reached parity in terms of their offerings in the latest console generation with Microsoft adding “free” games and Sony requiring Plus for online multiplayer.

PS Plus and Xbox Live are good examples of how Sony and Microsoft are working to increase value in their products to attract players to their side of the console battle. This competition has also spurred Microsoft to lower the price for the Xbox One down to $350 for this holiday, which is a $150 decrease from its $500 price last year.