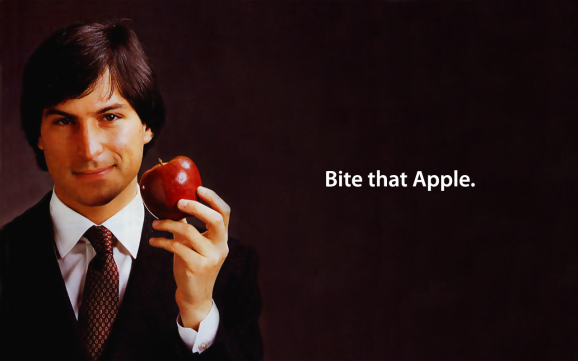 Steve Jobs didn’t launch two of the most valuable companies in modern times by following the rules all the time.

Jobs faced many obstacles to get Apple, and later Pixar, off the ground. But Jobs had a unique way of crafting his own reality, a “distortion field” that could persuade people that his personal beliefs were actually facts, which is how he pushed his companies forward.

And he also used a blend of manipulative tactics to ensure his victories, particularly in boardroom meetings with some of the most powerful company executives in the world.

Many consider Jobs a genius, but there’s no reason we could all learn a thing or two from his tactics.

Here, we teach you how to get what you want — whether that’s in your career, or in your life in general — by using examples from Jobs’ life. Most of these stories were taken from Walter Isaacson’s biography of Steve Jobs, which you can buy here.

Work hard, and others will respect you. Respect is a crucial first step to getting what you want.

By 1996, Apple had a serious issue: it was pinning its hopes on a new operating system that wasn’t and wouldn’t even solve Apple’s needs. So it looked for a partner to build a more stable operating system: in the end, it came down to two companies: a company started by Jean-Louis Gassée called “Be,” and NeXT, Jobs’ computer company that was struggling at the time.

When it came time for the two companies to pitch to Apple, Gassée acted too nonchalant, whereas Jobs didn’t hold back. Amelio described Steve’s sales pitch on the NeXT operating system as “dazzling. He praised the virtues and strengths as though he were describing a performance of Olivier as Macbeth.”

When Jobs eventually returned to Apple and he was still leading Pixar, he says he worked from 7 a.m. to 9 p.m. He suffered from kidney stones. But he insisted on motivating both companies by consistently showing up and pushing people to make the best products possible, and they respected him for it.

Pitch with passion. People can be influenced by strong displays of emotion.

Pitching was a key part of Jobs’ repertoire, and it should be part of yours, too. The process of selling — yourself, or a product — is the key to getting others to buy into your ideas.

In a pitch to the trumpeter Wynton Marsalis, Jobs wanted to show off everything iTunes could do — he was recruiting musicians at the time in hopes of corralling the record labels into going along with the iTunes plan. Marsalis said Jobs talked for two hours. “He was a man possessed,” he said. “After awhile, I started looking at him and not the computer, because I was so fascinated with his passion.”

He also pitched his marketing gurus with a similar passion, to “ensure that almost every ad they produced was infused with his emotion.”

Disarm people with seduction and flattery.

Whether they’re working for you, or you’re working for them, people continually seek approval for their actions so they respond very well to affection. And if you keep giving it to them, they’ll eventually crave it from you. From Isaacson’s biography:

“Jobs could seduce and charm people at will, and he liked to do so. People such as (former Apple CEOs) Amelio and Sculley allowed themselves to believe that because Jobs was charming them, it meant that he liked and respected them. It was an impression that he sometimes fostered by dishing out insincere flattery to those hungry for it. But Jobs could be charming to people he hated just as easily as he could be insulting to people he liked.”